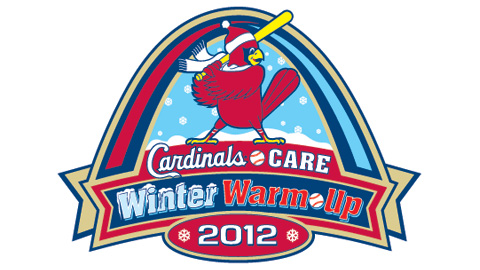 The Winter Warm Up kicks off in fine fashion today as marquee members of the St. Louis Cardinals take their turn providing autographs and face time with Cardinals fans from near and far. Some of the names in attendance today include Chris Carpenter, Adam Wainwright, Rafael Furcal, Fernando Salas, and Lance Lynn from the 2011 World Championship team. From the Cards’ minor league system, Jordan Swagerty, Tony Cruz, Zack Cox, Pete Kozma, Matt Carpenter, and Tyler Greene are scheduled to appear. And the alumni roster is impressive, too: Ken Reitz, John Mabry (also a coach on the 2012 team), Bob Sykes, Stan Royer, Glen Brummer, Ray Washburn, and Andy and Alan Benes are some of the names on today’s list. The line of fans wrapped around the building and halfway down the street from the Hyatt downtown before the gates opened at 9:00 this morning. But now the ballroom areas on the second and fourth floors of the hotel are flooded with Cardinal Red as the throng moves through the many autograph lines, presentations, and memorabilia tables. The Winter Warm Up is something every Cardinals fan should experience at least once. Even if you aren’t an autograph hound or don’t lunge for every piece of red swag you can get your hands on, the event is truly something to behold. And all the proceeds go to charity…who can argue with that?

I’ll be your I-70 Baseball roving reporter all weekend, bringing you stories, tweets, and video from members of the 2012 St. Louis Cardinals team, front office, and favorites from days gone by. Stay tuned.