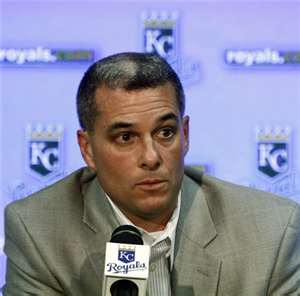 By most accounts, “The Process”, as Kansas City Royals General Manager Dayton Moore has often referred to his vision for the Royals, can be broken down into 3 phases. Phase One would be the rebuilding of the farm system. There is no denying that phase is complete. The second phase is transitioning the talent in the farm system to the Big League roster. Most would agree that this phase is mostly complete as well. The third and final phase to “The Process”, would be to identify the missing pieces and fill those gaps via free agency and trade. The Royals are just beginning to enter this phase now. Since Dayton Moore took over his post as Royals GM in June 2006, the trades that he has pulled off have drawn mixed reviews. So as he and his staff embark on Phase Three of “The Process”, it is important that we review the history of the Royals trades in the Dayton Moore era, so as to help predict the success of the recent and future trades that will be made by this regime.

We will use the WAR (Wins Above Replacement) statistic to determine the positive or negative impact of each trade. For those unfamiliar with this statistic, it is defined as: A single number that presents the number of wins the player added to the team above what a replacement player (think AAA or AAAA) would add. In fairness, we will only take into consideration the production that each player the Royals traded FOR had with the Royals, and each player the Royals traded had with the team they traded that player to. So while this study does have some flaws, it will provide a pretty good snapshot as to how Dayton has fared in the trade department.

In the first of this multi-part column, we examine the trades that took place in 2006:

Before Dayton even had time to pick out the furniture in his new office, he decided to go shopping for a=n athletic, speedy center-fielder. Enter Joey Gathright and somebody named Fernando Cortez, and exit J.P. Howell.

Keppinger has been a useful starting major leaguer for a number of years, and it is easy to forget that he was even a Royal. And there surely have been plenty of times since July 19,2006 that Royals fans would have much rather seen him patrolling 2nd base rather than whoever they had out there. Unfortunately, for the 3 months he was a Royal, he did prety much nothing

Mac the 9th didn’t really do much after leaving the Royals. But at least he actually played for the team that traded for him, unlike the 2 gentlemen the Royals got in return.

Cortes: 0.0 WAR (never made majors with Royals before being shipped to Mariners for Yuniesky Betancourt)

Dessens had been a mediocre at best reliever for the Royals for the first part of 2006, so the fact that they were able to flip him prior to the deadline for a serviceable former all-star starting pitcher like Perez, makes this the first decent trade of the DMGM era.

This is an interesting one. Because if you consider what De La Rosa has been able, when healthy, to do since leaving the Royals then this one without question swings in the Royals favor. However, during De La Rosa’s tenure wiht the Royals, he was one of the most frustrating to watch and at times ineffective pitchers to wear a Royals uniform.

This turned out to be pretty equal trade in terms of Suck for Suck.

Stairs: -0.3 WAR with Rangers (88 plate appearances in 2006 before being shipped off to Detroit for the remainder of the season)

Royals fans should remember this one quite well. Affeldt was a maddening pitcher for the Royals. I will never be able to hear about a pitcher having blisters on his throwing hand again without thinking of Jeremy Affeldt. Affeldt has since put it together to become a very effective left-handed reliever, but it didn’t happen with the Rockies. Bautista was supposed to have this “electric stuff” that he just needed to harness. Well, it never happened with the Royals, or anywhere else for that matter. And in Shealy, the word was that the Royals had finally found their 1B of the future and could begin taking the pressure off of Mike Sweeney. And…who is Scott Dohmann again? Whoops…

In aggregate, both teams essentially added less than replacement talent with this trade,but in this study, the Royals came out on top.

For awhile, this trade was the crown jewel trade of the Dayton Moore era. Bannister immediately arrived in Kansas City and settled in as a steady starting pitcher and finishing 3rd in the Rookie of the Year balloting, while Burgos soon encountered legal issues in his native Dominican Republic and never played again.

It is hard to imagine why Kenny Williams was so interested in taking all of the ineffective relievers off of the Royals’ hands. This should have been a good trade. And for one year it was. But when “Gloady” as Buddy Bell liked to call him, is getting 418 plate appearances in a season and starting 95 games at 1st Base, that says a lot more about your team than it does about a steady utility player like Ross Gload.

So what does this tell us? Other than the fact that the Royals did quite a bit of exchanging of “junk” with other teams in 2006, Dayton Moore came out slightly on the short end of his trades in by -0.6 WAR, based on this study. The big ones were the J.P. Howell trade, which he lost, and the Brian Bannister trade, which he won.