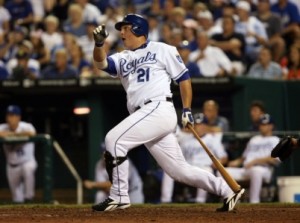 I keep changing my mind on whether the Kansas City Royals should or should not trade Billy Butler. I think there are valid points for both sides of the argument whether to trade him or not. I am a big fan of Butler. He has been one of the few consistent players for Kansas City for his four and a half seasons as a Royal. However, I think the Royals front office is not doing their jobs if they are not at least shopping Billy around to see what the market could be for him.

Some of the biggest complaints with Butler are that he is essentially only a designated hitter and a poor base runner which really hurts his overall value in terms of sabermetrics. Another minus for Billy is that this is as a DH/1B, he really is not that special of a player. He is essential a 2.0-2.5 WAR player and when you have no positional value you have to be a very good hitter to make an impact, and thus far, Butler has not hit at that level. Also as an exclusive DH, Butler is hurting the team’s overall roster flexibility. If someone other than Hosmer needs a day off, you simply can’t put Butler anywhere else in the field.

Freneau from Royals Review had a great article on this topic and summed it up nicely saying:

“The Royals are in a tough position. As a small market team, they need some long-odds bets to payoff. Obviously, trading Butler and then watching him blow up would be devastating to the Royals. But you can’t manage a team based on fear. Butler is a nice player for the Royals, but he isn’t pushing them to a championship right now. If Eric Hosmer was an outfielder, this might be a different discussion, but he’s not. And as such, Butler is just short of being in the way. He’s not there yet, but he’s closer than you think.

So we come to a rather obvious and not so bold position, but one that nevertheless no one is making: the Royals should be shopping Butler.”

The Royals are in a position where they could use Butler as a trade chip to help land a frontline starting pitcher which is what they are really lacking if they want to become a serious contender. Like I said in my previous post there are a few pitchers that I would be targeting if I was running the Royals, Shields (Rays), Garza (Cubs), and Rodriguez (Astros). The price for these starters might be too high for Kansas City but I would offer Butler plus a few prospects for one of them.

If the price to bring in an ace level starter is too high then the Royals should not trade Billy just to make a trade. The Royals do have a really fair contract with Butler having him locked up for the next three seasons at $8 million per year and a $12.5 million option with a $1 million buyout in 2015. Kansas City could keep Butler to see if he develops his power more.

Regardless, the Royals have options to improve this team into a consistent division winner sooner rather than later. 2012 and beyond is definitely looking better for Royals fans. Oh and by the way, only 41 days until pitchers and catchers report on February 19th. Baseball is right around the corner folks!