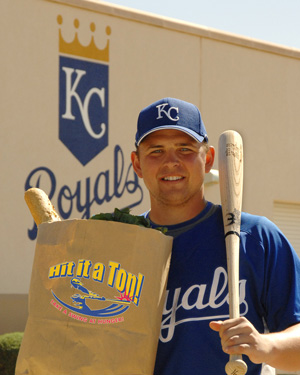 KANSAS CITY, MO (January 5, 2012) – The Fred Hutchinson Center Research Center has announced that Kansas City Royals designated hitter Billy Butler will receive the 47th annual Hutch Award®. The award is given each year to a Major League Baseball player who best exemplifies the honor, courage and dedication of baseball great Fred Hutchinson, both on and off the field.

Butler put together a solid season as the club’s full-time designated hitter in 2011, batting .291 with 19 home runs and a career-best 95 RBI. He also recorded 44 doubles, becoming the first Royal to post three consecutive seasons with 40 or more doubles. Butler, 25, is one of 10 players in Major League Baseball since the start of 2009 with at least 500 hits, 200 runs, 50 home runs and a greater than .300 average.

Off the field, Butler is known for his selfless attitude and desire to help others. In 2008, Butler and his wife, Katie, started the Hit-It-A-Ton program to help feed disadvantaged families in the Kansas City area. Through the program, $250 is donated for each home run Butler hits with an additional $125 for each double. Hit-It-A-Ton has raised in excess of $250,000, providing more than 1,000 tons of food through two food banks and a community kitchen run by Kansas City’s Bishop Sullivan Center.

When Butler comes to Seattle to receive his Hutch Award, he will visit cancer research labs at the Hutchinson Center as well as the Hutch School, a unique K – 12 accredited education program that serves young cancer patients and school-age family members of patients.

The Hutch Award recipient is selected annually through a vote of all surviving former awardees. A total of 46 players have been honored since 1965, when Mickey Mantle accepted the inaugural award. Butler becomes the fourth Royal to win the award, joining George Brett (1980), Dennis Leonard (1986) and Mike Sweeney (2007). Former Royal Mark Teahen also won the award following the 2009 season but was a member of the Chicago White Sox at the time of his award acceptance.