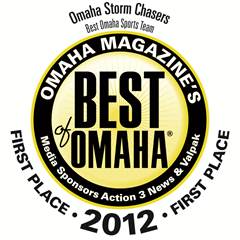 OMAHA, Neb. — The Omaha Storm Chasers have been named Omaha’s Best Sports Team by the readers of Omaha Magazine, continuing a four-year run as the first-place selection. The announcement comes on the heels of the Chasers’ Pacific Coast League Championship season and the highly-successful opening of brand-new Werner Park in 2011.

“Even though we received several national accolades throughout the 2011 season, being named Best of Omaha is perhaps the most fulfilling for our organization,” said team president and general manager Martie Cordaro. “The overwhelming positive support from fans and readers of Omaha Magazine throughout the metro area is special. This award signifies the endorsement of all our efforts over the past few years and we couldn’t be more thankful.”