Barring any trades, the Kansas City Royals’ position players are set for next year. Here’s what that will look like: 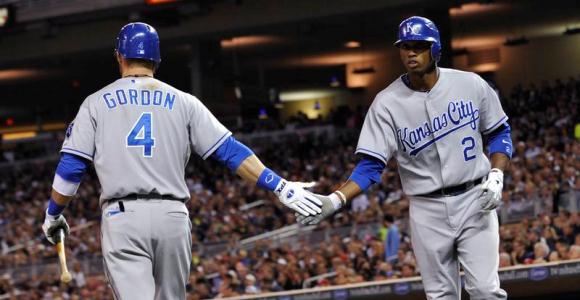 The major things that are yet to be determined are the batting order and rotation.

Perhaps the biggest question for the batting order is: Do the Royals want to keep Alex Gordon in the leadoff spot or try someone new?

It would be really difficult for Ned Yost to move Alex Gordon out of the leadoff spot. Last year, Gordon showed that he has the type of power (23 HR’s, 45 Doubles, 87 RBI’s, .502 OPS) to be an everyday 3 or 4 hitter. However, the Royalshave enough power in the middle of the lineup already with Butler, Hosmer, Francoeur, Moustakas, and even Perez. What Kansas City lacks is a guy other than Gordon who can consistently get on base and make something happen from the top spot in the lineup.

Giavotella, Cain, and possibly even Escobar seem like the only other candidates to take over Gordon’s spot. Giavotella and Escobar’s On Base Percentages (.273 and .290, respectively) aren’t quite good enough to legitimately make a case for them, and neither have established themselves as legitimate, top of the lineup hitters. Cain, on the other hand, was a 3-6 hole hitter in Omaha last year and showed improvement in the power department. His skills (yet to be seen for a full MLB season) seem to translate more into a number 2 or 6 type hitter.

Unless someone breaks out in Spring Training, Gordon should undoubtedly stay put in the leadoff spot. The trio listed above will make for an interesting competition for who should be the number 2 hitter.

Next week, we’ll look at the rotation’s endless possibilities.