For a self proclaimed non-movie watcher I seem to be making a lot of movie references for these Royals columns. I go to a movie theater about once a year, if that. Despite it’s popularity I do not subscribe to Netflix. If there is not a sporting event on television…I don’t watch television. But to be honest, when I heard about the Melky Cabrera for Jonathon Sanchez trade the phrase Thank you sir, may I have another from the cult classic, Animal House was the first thing that popped into my mind. I guess that says a lot about my mentality. 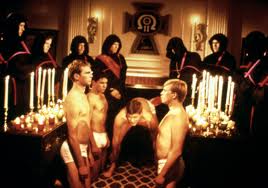 As others have pointed out this trade is not without it’s risks. What trade isn’t? What I do know is that Dayton Moore took a player in an area where the Royals did not have a need, in exchange for a player where the Royals did have need. Melky’s 2011 production will be missed. But no one is sure that production would make a 2012 appearance anyway. On the surface it’s a good trade. The Royals rotation is improved, and a door is opened for prospect Lorenzo Cain.

Dayton Moore’s track record of trades at the major league level has been suspect. Despite that, as a Royals fan I want to see more of this. I discussed such a trade here during the season. Make no mistake, for the Royals to get a pitcher capable of anchoring a playoff caliber staff they will have to part with some prized prospects. Either that, or sign a big name free agent. That is not likely, nor is this the year to do it.

I would not expect anything major to happen until MLB decides on their new Collective Bargaining Agreement. But it would be nice if the Royals front office made a move that made the offseason go by really, really, really slow. Thank you sir, may I have another. Another good trade, not another offseason. In the mean time I recomend and a spontaneous road trip.