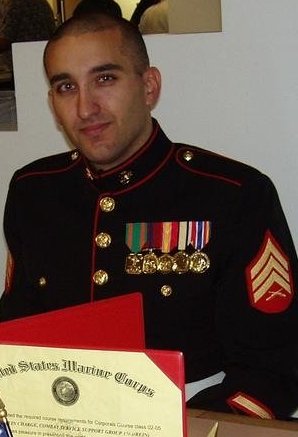 Josh Gilliam is one of the original writers for I-70 Baseball and served as editor when the site first launched in July of 2010.

I requested Josh to pen a piece for the site in honor of Veteran’s Day. Josh’s submission is below:

Like most baseball fans I know, the months of November and December give a chance to recharge and get ready for the next season in the sun. After I turned 21, most of my reflection time starts on the same day each year. Today is important for many special reasons but for my family, it starts a stretch where giving thanks is all that matters.

The 2011 St. Louis Cardinals brought back many great memories and caused even more that will last a lifetime. Mainly it reminded me how much I love sharing the game with those closest to me. It was well worth the last decade to be able to hear the joy in my wife’s voice as she watched ‘our boys’ celebrating.

I was not raised in a military family or even educated on the ways of the world. My parents are proud hippies and were not happy at all when I informed them of my decision to join the United Sates Marines. Thankfully coming from a small town in Iowa I was just naïve enough to not know what I doing while still cocky enough to not care.

As we celebrate Veteran’s Day, it is my sincere hope that everyone has someone to thank for their service. I met a WWII Marine while stationed in California who helped change my life. As the before-mentioned overconfident young Devil Dog, I thought I had it all figured out from pretty much Day One. It wasn’t until getting in some trouble that I truly found out what I was made of, and the same can be said for the newly minted World Champions.

Both of Grandfathers served in the military, but they passed away before I was born. As things turn out, I had the rare opportunity to befriend someone who I consider my Grandpa just the same. Madison served in the Pacific and had stories that I only wish I had recorded. He only ever asked one thing of me, and it was my honor to help him get another set of Dress Blues.

During those tough times away from family and friends, I leaned on the words Madison shared. He is a big reason why I got back into writing and more importantly didn’t change who I was. The Birds on the Bat have always been a blessing, and this postseason reminded me of what truly matters.

It never gets easier to open old wounds, but the 2004 World Series is now one I can reflect on fondly. That doesn’t mean that Boston is any less hated, but their former manager is welcome as far as I am concerned. Sitting at a computer listening to Game 1 of the ‘04 Series outside of Fallujah can not be duplicated. Even two years later in Baghdad, my time in Iraq is directly tied to baseball.

The amazing stretch that we were all witness to this season is truly remarkable. The Cardinals were able to do the impossible, and that has helped where I now live in Missouri. Joplin will take a very long time to recover, but St. Louis gave all fans a nice distraction while also reminding us never to give up. The National Guard provided support at a time when most affected residents had little hope. And I can’t wait to see the progress by the time Championship Banner #11 is raised.

When people thank me for my service, I tell them truthfully it was my privilege to be able to do it. No matter what branch of the military or when they served, just know that every veteran is grateful to be remembered. Enjoy your weekend and thanks to those currently serving for my continued freedom!

One thought on “Giving Thanks”