Friday night I was sitting in the bleachers at Busch Stadium watching the St. Louis Cardinals defeat the Texas Rangers in Game 7 of the 2011 World Series for their 11th championship in franchise history.

File that one under “Sentences I never thought I’d write in a million years.” 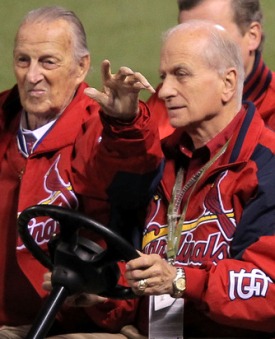 Going to a St. Louis Cardinals game is a special thing whether it’s Opening Day, some mid-July Sunday afternoon roaster, or a postseason game for the ages. The reason? All you have to do is look around, whether inside or outside Busch, and it becomes clear: A Tradition of Greatness. Outside you’re greeted by statues immortalizing the franchise’s—and some of Major League Baseball’s—all-time best. Stan Musial, Jack Buck, Bob Gibson, Lou Brock, Ozzie Smith, and others…they define professional baseball because of their accomplishments, and it all happened representing the St. Louis Cardinals. Even while cruising past the upper levels of Busch on Interstate 64/US 40, the biggest numbers visible from the road aren’t the ones on the speed limit sign or some billboard; they’re the World and League Championship years plastered on the side of the stadium. Inside, it’s more of the same: retired numbers and/or championship pennants catch every sight line.

All this entered my mind as I strolled through the gates in left center field before Game 7—and not just because it was what I saw. It was more like something I anticipated, or sensed almost in a gut feeling kind of way: another chapter in the extraordinary history of the St. Louis Cardinals was about to be written right before our eyes.

It isn’t unusual to run into random friends at a ballgame, but Game 7 isn’t just “a ballgame”–it’s the ballgame. Whether it’s a season ticket holder you see at almost every game or someone you knew from high school, the exchange is just a little more meaningful. The hugs were a little tighter; the handshakes were a little warmer. And the first thing said was usually something like “Can you believe we’re here?” with a smile that rivaled that of a kid on Christmas morning.

The game itself was somewhat pedestrian relative to everything that led up to it. The Rangers tacked on two runs in the first inning, and probably should have scored more. The Rangers fans that dotted the crowd were whipped into an early frenzy, and with good reason: the potential historical significance was not lost on them. Their team has never won a World Series, and they already had their initial taste of it in 2010. Chris Carpenter looked shaky, and Tony La Russa’s decision to start him on short rest was beginning to look even more questionable. If they could get some good pitching of their own and keep hammering away at an obviously off Carpenter, the pendulum could irreversibly swing their way for good. Maybe it was finally time for the Rangers to get a championship banner of their own after all these years, and beating the great St. Louis Cardinals would make it that much sweeter.

But the Cards responded in their half of the first when—who else—David Freese drove in two with yet another extra base hit. The crowd
went bonkers, of course, and in between shouts of joy and hops of excitement could be heard things like “I don’t believe this!” and “You’ve got to be kidding!” Even as it unfolded before our eyes, it still didn’t seem possible that the Cardinals were just this close to another World Championship. Really, how was it possible?

The Rangers pitched in on the answer to that question by not scoring another run in the game. To make matters worse, in the fifth inning they gave the Cardinals freebies by walking Yadier Molina with the bases loaded and then hitting Rafael Furcal with the sacks still jammed. It was quickly becoming a night where nothing went right for Texas and everything was going the Cardinals’ way. Carpenter finally found the right gear and was able to hold the Rangers scoreless for five more innings after the rough first. Allen Craig continued to make a statement by hitting a homer in the third and taking one away by catching a long fly at the top of the wall in the sixth.

After that remarkable play, countdowns started. Nine more outs to get. And every time the Rangers came up empty in their half of an inning, the fingers at the end of extended hands started folding. Eight outs to go…seven…six…it was like an extended version of waiting for the big ball to drop over Times Square on New Year’s Eve. The comparisons to holidays are extremely accurate, because this was a holiday. This was the greatest St. Louis holiday, and the crowd finally started to feel like it was an approaching freight train that couldn’t be stopped.

Before I knew it, the beats of “Lose Yourself” by Eminem were pulsating through the stadium. Jason Motte was coming in to close out Game 7 of the 2011 World Series. At that moment, it became real. We were three outs from fireworks and confetti and bedlam. The legend, that magic many of us had only seen on TV or in replays or imagined in our dreams, was finally set to go down right before our eyes.

Everything that the Cardinals accomplished in 2011 came from a place of adversity. Their ace, Adam Wainwright, was ripped from their roster before they could barely get settled in their Spring Training routines. Their closer, Ryan Franklin, imploded on Opening Day and never fully recovered, finally being released because he couldn’t live up to the value of his spot on the team. Injuries piled up. Intrigue around the contract status of Carpenter and La Russa and, most glaringly, Albert Pujols simply would not go away. The Cards managed to play well enough to lead the NL Central for a good portion of the year, but everything seemed to catch up to them at once and they found themselves out of the race. And then something happened in late August that sent this club on an irreversible trend upward. No matter how many times the bad rared up, the good beat it back. This final night of the season would be no different.

The final outs of Game 7 would not be cakewalks: ALCS hero Nelson Cruz and World Series hero Mike Napoli were due up for the 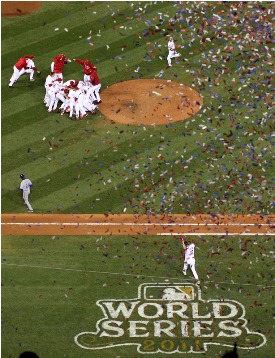 Rangers, representing two of their team’s last chances in the final frame. But they were dispatched in short order by the Cardinal defense. There was one final out separating the Cards from victory. And for one last time, in the ninth inning of Game 7 of the World Series, the Cardinals and their fans had to hold their breath as the bad—a pretty well-struck David Murphy fly ball toward the left field corner—was once again beat back by the good in the form of Craig hauling it in to conclude what was a series and a season for the ages. And, true to the cliché, the crowd went wild.

History tells us the St. Louis Cardinals are likely to win another World Series in seven games at home. On the surface, this 2011 championship wasn’t unique to the franchise because they aren’t strangers to World Series that go the distance and end in St. Louis. But none of the previous 10 championships were won with such incredible odds staring the team down for so long. It felt like they were on the brink of elimination every day of the last nine weeks or so. That’s a lot of drama, a lot of emotion, and a lot of exhilaration. Because this St. Louis Cardinals team made plenty of mistakes along the way, but in the end they they simply would not die. They fought until the bitter end, and when the smoke cleared they found themselves on top of the baseball world once again.

It’s hard to put into words what attending Game 7 of the World Series as a fan really means. Terms like “great” and “amazing” and “unbelievable” don’t really seem to do the night justice. The event really was better than the game itself. But when a World Series championship is at stake, that’s almost a given. Regardless, it truly was the greatest night of baseball I’ve ever witnessed. And it is something I will never forget.

One thought on “Game 7 From The Inside”