While saying, reading, or hearing it doesn’t quite carry the same weight as “Game 7”, there’s no difference to the players, managers, coaches, and fans–it’s an elimination game. The bad news is that if the Cardinals lose tonight, their 2011 season is over.

The good news is that the same holds true for Philadelphia, a far less experienced team than St. Louis when it comes to games that are:

*yawn* The Cardinals have been playing “that game” for a long time now, and I believe they’re mentally prepared to handle that aspect of tonight’s 7:37 (CT) contest. They’ve won when they needed to (though you shouldn’t fully trust me enough to read on, unless I mention that the Cards’ successful run doesn’t happen unless teams that need to lose do just that). The question tonight is: Will the Phillies lose, like the Cardinals need them to? One thing about tonight’s game that differs from the redbirds’ run over the last 5 weeks of the regular season is that the answer to that question is something they control.

After August 25th, the Braves lost 20 of their final 30 games, a winning percentage of .333. Examined more closely, we learn that they lost 9 of their last 12 (.250 winning %), including 5 of their final 5 games (.000). The Braves squandered a sure thing. They were an absolute lock for the NL Wild Card, all they had to do was not have a meltdown of historic proportions. But they did. 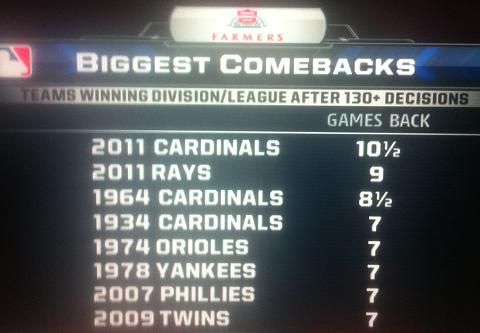 The Cardinals never gave up, and kept winning when they needed to, and as we all know, clinched a playoff spot by the narrowest possible margin on the last day of the regular season. I guess that’s what happens when you write one thing…another happens. But again, the Cards handled what they could, yet still needed Atlanta to lose–fortunately they obliged.

But for as many ways as tonight represents many of the same things the Cardinals have become familiar with since the end of August, it’s not the same. In fact, it’s quite different. The fate of the Cardinals postseason hopes is theirs to determine. No playing in another city while scoreboard watching to see if the Phillies lose, no hoping to gain ground on the opponent’s off day, this is it. And I think most of Cardinal nation would agree that there is no better man for Tony LaRussa to send to the mound this evening than Chris Carpenter. Big games call for big game pitchers, and he’s the biggest game pitcher they’ve got.

But Roy Halladay’s no slouch, to make the understatement of the year. The redbirds will have their work cut out for them as they face one of the game’s premier pitchers tonight in his home park, where (another) new attendance record could fall. Say what you will about Verlander and Sabathia, this is the pitching matchup of the postseason so far!

Plenty has been written and discussed about the relationship and history between tonight’s two starters, a topic that I’ll gracefully sidestep today. I would, however, like to remind you that as improbable as the Cardinals appearance in the postseason seemed 6 weeks ago, they’re here now. The secret to a championship has long been: Get in, get hot. The Cardinals are trying a slightly different approach: Get hot. Get in. Stay hot. Hopefully that formula works…we’ll know in a few hours!

If you’re a fan of great pitching, tonight, you’ll be in paradise! I recall back in May of 2000 there was a regular season pitching matchup between Kevin Brown and Randy Johnson (link here), and I had a final the next morning. REALLY should’ve been studying for that exam, but just could not not watch! West coast game with a late start? Didn’t matter. That was an amazing pitching duel to sit back & enjoy, and after each starter had completed 8 innings, it was up to the bullpens. When grabbing that link, I had to look to see who ended up winning that game–I was so much more enthralled with the pitching performances that I’d forgotten. Probably having a lot to do with that was the fact that it was a regular season game in early May, and had little to no bearing on much of anything at all. Tonight, however, will be so different that if one baseball game could be the opposite of another, this just might fit the bill. I don’t know about you, but I’m not going to miss one single pitch of tonight’s game. And I assure you, I’m not going to forget who wins.

One thought on “Interactive Article: Choose Your Own Cliche”