ST. LOUIS — With the Cardinals in the first round of the National League playoffs, St. Louisans can eagerly anticipate both the national attention and the measurable economic benefits that post-season play will bring to the St. Louis region.

The St. Louis Regional Chamber and Growth Association’s (RCGA) Chief Economist Ruth Sergenian noted that the total economic impact of the Cardinals playoffs depends upon the number of games played here in St. Louis. If all possible games are played through the World Series, the impact would approach the impact of the All Star’s week in 2009 at over $56 million. Any added economic benefits to the region from the playoffs are above and beyond the $313.6 million impact of the 2011 Cardinals regular season.

Sergenian calculates that the economic impact of the Cardinals appearing in the Divisional Playoffs would approach $5.2 million per game. This estimate is based on the assumption that the games would draw 46,200 attendees per game. Historically, out of town visitors constitute some 40% of Cardinals attendance. The playoff’s will bring increasing attendance from the out of town visitors, as well as the media, and the MLB. Direct visitor spending is expected to reach $1.5 million per game for the division series. 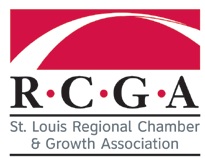 In addition to direct spending by visitors, operations at Busch Stadium will boost total new direct expenditures to $2.6 million pergame. There are approximately 3,000 day-of-game employees at Busch Stadium. The total direct expenditures will ripple through the local economy to generate nearly another $2.6 million in indirect and induced expenditures, to reach the total impact of almost $5.2 million. The RCGA uses an economic model called IMPLAN to develop these estimates.

“RCGA economist Ruth Sergenian’s projected economic impact of $5.2 million per National League Division Playoff game at Busch underscores the fact that not only do the Cardinals mean great baseball, but they also mean great economics for the City and region.”

The RCGA is the chamber of commerce and economic development organization for the 16-county, bi-state region. With nearly 4,000 member companies, RCGA members constitute 40% of the regional work force. The mission of the RCGA is to unite the region’s business community, and to engage dynamic business and civic leadership to develop and sustain a world-class economy and community.