• I noticed early in the season that Alcides Escobar was on pace to set a new low in win probability added (WPA) for not just the Royals but all of baseball history since 1950 (as far back as WPA has been figured by Baseball Reference). He had a hot streak out of nowhere in June that saved him from that record. The hot streak also lead to a lot of talk about Escobar having figured things out at the plate, and that narrative seemed to carry through the rest of the season. But Escobar actually turned right back into a pumpkin after June. His -4.8 WPA is second worst in Royals history, and the fifth worst in the last 62 MLB seasons: 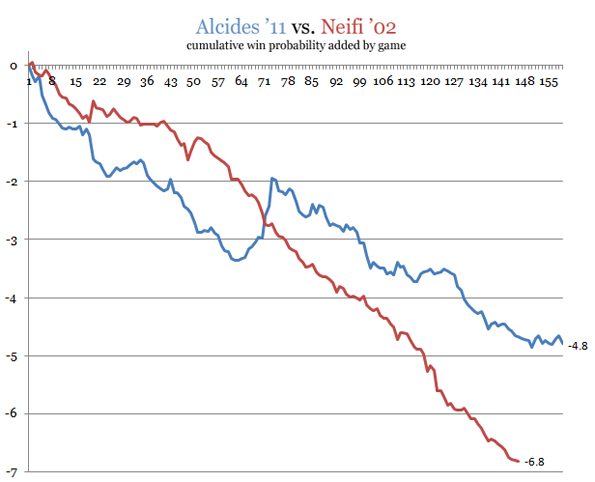 Escobar had the worst WPA in the majors for the second straight season. Add together 2010 and 2011, and here are the WPA trailers:
1. Alcides Escobar -8.6
2. Aaron Hill -4.5
3. Ronny Cedeno -4.5
4. Ryan Theriot -4.2
5. Jeff Mathis -3.7
Yikes. Escobar’s glove makes up for a lot, and the rest of the Royals lineup is strong enough to somewhat weather such a huge offensive hole, but it is still disconcerting to think Escobar might be the last player in the majors you want batting for your team.
• The Royals stolen base total ended at 153, falling to second most in the AL after the Rays stole three on the last day to bring their total to 155. So, great year for stolen bases by the Royals, right? Well, not necessarily. The team had a mediocre success rate (73% compared to the AL average of 72%). They did not so much do a great job swiping bases as just run a lot. Factor in the run values of stolen bases (around .2 runs) and and caught stealings (around -.4 runs), and the Yankees, Rangers and Mariners all had better years stealing bases. Still a good year by the Royals, but the overall impact was only about 7 runs. The rest of the AL Central was putrid, taking up the bottom four spots on this chart of AL stolen base runs:

Here is how the Royals did individually: 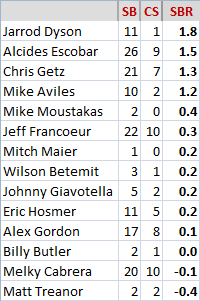 I hope you’ll forgive me if I can’t get too excited about Frenchy’s 20/20 season.
• Here are the final records for Royals starting pitchers if you give them a “win” for a quality start, positive WPA, or above average game score:

The biggest takeaway for me is that Royals starters had somewhere in the neighborhood of 72 acceptably okey-dokey starts. And in spite of a decent bullpen, offense and defense, the team still only managed to win 71 games. It’s almost like starting pitching is important and the biggest need for this team or something.
• Back in June, the starters were on their way to being the second worst unit in team history judged by FIP- (which measures strikeouts, walks and HR allowed against league average.) The improved second half by the starters slipped their total down to a tie for the ninth worst rotation in Royals history by FIP-. Here are the bottom 11 staffs:

So while the fielder independent numbers escaped being truly embarrassing, the starters adjusted ERA still managed to be about as bad as any in team history save for the dreadful ’05-’06 staffs.
• Ned Yost leaned hard on Tim Collins out of the bullpen early in the year. He slowed down a bit in the second half, and Blake Wood actually snuck by Collins to face the most batters in relief: 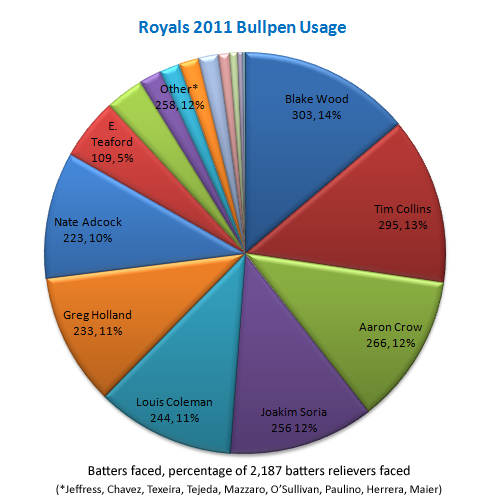 • The outfield trio of Alex Gordon, Melky Cabrera and Jeff Francoeur was a major highlight through the year. This was only the third year in team history that the three most used outfielders achieved 2.0 rWAR or more. The combined rWAR of 11.8 is third best by a Royals OF trio, only behind 1999 and 2000:

• The Royals position player of the year is no-doubt, 100% slam dunk Alex Gordon. And that’s not just by the numbers. I watched the team all year, and Alex was clearly the man. Ryan Lefebvre said this week that Francoeur was the team’s MVP thanks to the witchcraft that Francoeur performs in the clubhouse that made the Royals such an incredibly awesome, 91 loss team this year. If the voters feel that way and do not recognize Alex’s season, I may go mental.
• The team pitcher of the year is much tougher to call. For me it comes down to Bruce Chen and Greg Holland, and they are so completely different it is hard to compare them. Pitch for pitch, there’s no contest. Holland was stinky filthy in his 60 IP. But Chen performed his magic act for 155 innings. They are both deserving.
• The team’s 105 OPS+ is the first above average mark since 1990, and the highest since 1982! Unreal. Here is how the Royals have fared each year since 2000 in OPS+ and ERA+: 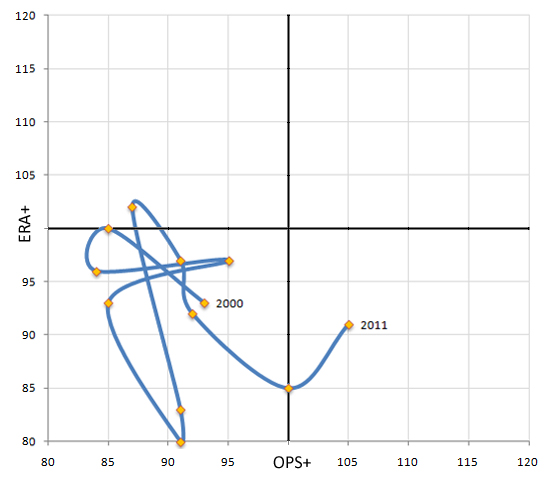 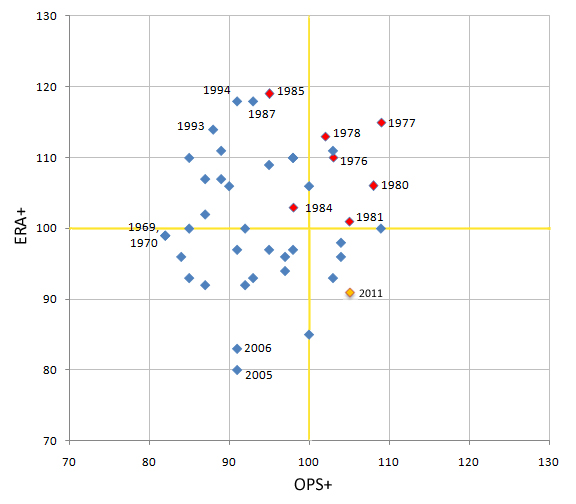 • Finally, (with a nod to Justin Bopp) I’ve computed just how awesome Eric Hosmer is: 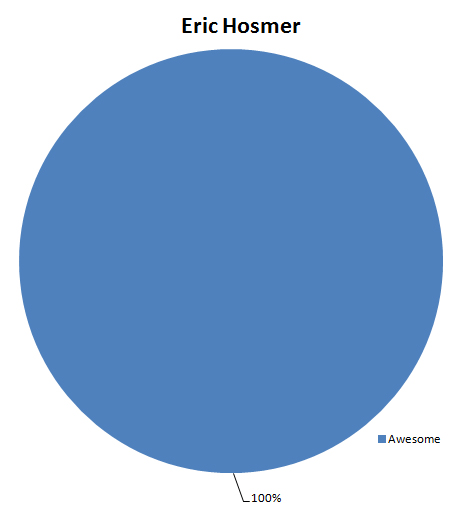