On September 22, a rain delayed Thursday afternoon game, the Cardinals lost a heartbreaker to the New York Mets. Trailing Atlanta by just 1 1/2 games, the Cardinals were just three outs from closing that gap to just a single game, when a tired and perhaps over-used bullpen blew up, and the Mets won.

I70-baseball writer, Dathan Brooks, suggests that the loss is not the end of the season in his most recent article, If Ya Gotta Lose (And You Do), Lose That Game. We now know that the Cardinals also lost the following game to the Cubs, making it that much more difficult to win the NL Wild Card. With fans suddenly exiting the Cardinals bandwagon, I thought it might be interesting to look back at some other disappointing losses, to see if we can put that Thursday afternoon catastrophe in some sort of perspective.

The list started with ten through six in a previous post, which can be read here. With that as background, here are my top five Most Disappointing Cardinal losses.

Chris Carpenter had pitched the opening game of the 2009 National League Divisional Series on short rest, and it looked like it. The Dodgers were hitting the former Cy Young winner hard, and often. They had taken Game One, at home, but were still looking like the underdog in this series.

That was apparent when Cy Young hopeful, Adam Wainwright pitched one of the best games in his short career. 8 innings, 3 hits, 7 strikeouts and just one walk – in a must win game. A Colby Rasmus double in the seventh inning would give the Cardinals a 2-1 lead. It was still 2-1 when Ryan Franklin took the mound with one out in the bottom of the ninth. Manny Ramirez would fly out to center field for the second out. One more out, and the Cardinals would leave Los Angeles with a split in the series, and all of the momentum.

That’s what we all thought would happen when James Loney lines out to left field. But Matt Holliday lost the ball in the lights, and dropped it for a two base error. Two walks, a passed ball, and two singles later, the Dodgers won the game, and the 2009 season came to an end for the Cardinals.

Oh, there was still one more game to be played, Game Three in St. Louis. That was just a formality as a truly defeated Cardinals team just went through the motions for nine innings to complete the Dodgers sweep.

It is hard to believe that there are more disappointing losses than this one, but there are.

This is a game that has been somewhat forgotten over the years, and it is unfortunate. The Cardinals and Pirates entered the last game of the season in a tie for first place. The winner of the division will have the monumental task of playing the Cincinnati Reds at the peak of their Big Red Machine days.

The two teams were playing their respective games at nearly the same time, so there was a huge emotional swing as we paid as much attention to the scoreboard as we did to the game we were watching.

The Cubs would take an early lead against the Pirates, as would the Cardinals in their game with the Expos. Bob Gibson was on the mound for St. Louis, and while he had struggled though injury and sore legs through most of the season, he was vintage Gibson in this game. As the clock passed through 8:15 pm in St. Louis, it seemed as if the Cardinals would win the National League east. By 8:30, that all changed on a pair of home runs, one in Pittsburgh, the other in Montreal. Pittsburgh would win the NL East by one game, and St. Louis would not return to post-season for nearly a decade.

This is perhaps an alternate ending for the fans who questioned Tony La Russa’s decision to remove Chris Carpenter from a tie game with the Cubs on night following the Thursday Afternoon Meltdown. Like Gibson, Carpenter had struggled through most of the season, but had found one more A+ game. Red Schoendienst chose not to remove Gibson, and he would end up taking the loss. 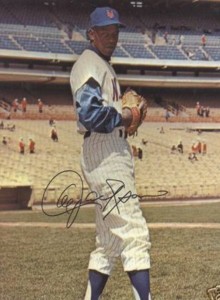 After nearly completing a miraculous comeback in 1963, the Cardinals again found themselves in a playoff race in the final series of the season. Holding a slim one game lead over the Reds and Phillies, and facing the New York Mets, still playing like an expansion team, you had to like your chances if you were a Cardinals fan.

Oh, let’s also add in that Bob Gibson, winner of 17 games so far, was on the mound for the Cardinals. Bring on the Yankees.

Not so fast. Al Jackson, the little left-hander with an awful career win/loss record had a different idea. Ed Kranepool would single home George Altman in the third inning for the Mets. It would be the only run of the game as Jackson throws a complete game shutout. The little guy that would flirt with no-hitters several times in his career, held the Cardinals to just 5 hits.

To make matters worse, Ray Sadecki would get bombed in the next game as the Mets won, 15-5. Johnny Keane was forced to use eight pitchers in the game, which left his bullpen in shambles for the final game. What looked most promising on Friday night, was now a Sunday afternoon nightmare.

When Curt Simmons struggled in the final game, Keane took a chance and went to Bob Gibson, pitching on one day rest after throwing 8 innings. It was the gutsiest performance in Cardinals history, pitching on fumes while the Cardinals bats finally woke up, giving him his 18th win.

That final weekend in 1964 was supposed to have been played without any drama.

Denny McLain, Mickey Lolich and the Detroit Tigers had an amazing season, but they were supposed to be just a speed bump on the Cardinals path to their second consecutive World Series title, the third in five years. That was apparent when Bob Gibson dominated in Games One and Four, and the Redbirds steamrolled to a 3 games to 1 lead. It didn’t matter that the Tigers had roared back to force a Game Seven, so did the Red Sox a year earlier.

For the first six innings in Game Seven, this was as good as baseball gets. Mickey Lolich and Bob Gibson are putting up zeros at an alarming rate. The turning point in the game happened in the home half of the sixth inning. Both Lou Brock and Curt Flood were picked off first base. That just didn’t happen, especially to those two. The momentum swung to the Tigers side of the diamond, and they capitalized in the top of the seventh.

Bob Gibson would quickly retire Mickey Stanley and Al Kaline to start the inning. What happens next caught the entire baseball world off guard. Nobody was concerned when Norm Cash and Willie Horton singled – this was Bob Gibson. Then the unthinkable – Jim Northrup rips a line drive into left center field. Curt Flood had been playing Northrup to pull the ball, so was shading him to right field, and somewhat shallow. Flood misread Northrup’s hit initially, and then slipped on the wet turf as he tried to correct his path to the ball. It flies well over Flood’s head and rolls all the way to the wall for a 2 run triple.

That would prove to the the game winner, as Lolich goes the distance and earns the win.

That brings us to THE most disappointing loss. Although we still argue about why the Cardinals lost this game, I doubt that there is any debate about this being the worst loss in Cardinals history.

This game is remembered for Don Denkinger’s ninth inning call that, more than 25 years later, still divides a state. One half wants the other half to get past it, while the other half still have video tapes of the game buried somewhere in a closet.

What has been forgotten about this game are the performances of the two starters, Danny Cox for the Cardinals and Charlie Leibrandt for the Royals. Of the three big horses at the top of the Cardinals rotation, Cox was the guy you wanted on the mound in a must-win game. And he pitched a gem, going seven scoreless innings, striking out 8.

But Leibrandt was just as effective, as the Vince Coleman-less Cardinals just couldn’t do much against the Royals lefty.

The game was still scoreless in the eighth when pinch hitter, Brian Harper singled with two outs, driving in Terry Pendleton. That gave the Cardinals a 1-0 lead with just six outs from a World Series title. Ken Dayley worked a quick bottom of the eighth inning to set up the now famous “Call”.

Todd Worrell would take over for Dayley in the ninth inning. Worrell had been called up just before the September 1 post-season eligibility deadline and had taken over as the Cardinals closer. To underscore his level of experience, he had not appeared in enough games to lose his rookie status for the following season. That’s what makes the first play in ninth inning such a tragedy.

Jorge Orta starts things off by hitting a ground ball to Jack Clark at first base. He tosses the ball to Worrell, covering first base. That’s one mistake. It is still unclear what Don Denkinger thought he saw, but he called Orta safe at first base. Then the wheels came off, and quickly.

Steve Balboni hits a pop up over in foul territory behind first base. Jack Clark gives chase, and is unable to make the catch. That’s mistake number two. Balboni takes advantage of Clark’s miscue by hitting a sharp single.

Jim Sundberg tries to help the Cardinals cause by bunting the ball back sharply to Worrell, and he is able to throw out the lead runner at third base.

Then comes the final mistake, a passed ball. If any of Denkinger’s call, Clark’s error or Darrell Porter‘s inability to block Worrell’s pitch in the dirt don’t happen, the Cardinals probably win the game. But all three did, and that set up the winning run.

With runners at second and third with just one out, Whitey Herzog has no choice but to intentionally walk Hal McCrae to load the bases. That brings Dane Iorg to the plate, and he delivers a walk-off two run single against his former club. The Royals win 2-1, and that forces a Game Seven.

Game Seven seven was a complete disaster. It was a combination of a complete Cardinals meltdown and a terrific pitching performance by Bret Saberhagen. St. Louis would be embarrassed 11-0 and the Kansas City Royals would win the only World Series in their franchise history – at least so far.

Those are my top 10. And no, the Thursday Afternoon Disaster does not make the list. Do you agree or disagree ? Please let me know in the comments section.