The Minnesota Twins came to Kauffman Stadium this week and were quickly swept aside in less than 24 hours. Bruce Chen and Luke Hochevar looked like the 1 to 2 punch the Royals needed them to be back in June. Back when the Royals were in a free fall. Not to cheapen the wins the Royals got this week. They were wins, 62 and 63 which ensures that the Royals will not lose 100 games this season. Woo freaking Hoo! I would have rather had these wins when the Royals were still in the division race. But that is not what was sad about this series. What was sad, was how terrible the Twins were playing. 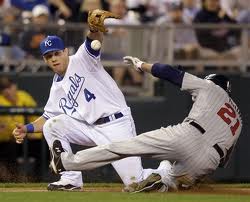 You see, the Twins are my favorite division rival. I have this perception that out of all the cities in the division Minneapolis is most like Kansas City. They are the most like Kansas City in market size, and from the visiting Twins fans I’ve met at Kauffman Stadium their fan base is similar to us in personality. It seems the Royals and Twins always play close games even though the Royals have a hard time winning a season series against them.

I think my affinity for the Twins as a rival began in 2003 when the Royals were actually competing for the division title. During that time the company I worked for had an office in Minneapolis and the guys there were big Twins fans. It seems we had a wager on every series that year. I even have a favorite game that year: This one. The Royals scored 12 runs in the bottom of the 6th. If you look at the box score you’ll notice it was against good pitching.

In August of that year the Vikings had a pre-season game at Arrowhead the same weekend the Twins had a three game series. Kauffman was invaded from the north with Minneapolis sports fans. I made a sign that said “Circle this Bert” depicting the Royals ahead of the Twins in the standings. I ran all kinds of smack at them when they were there. At the end of the game we smiled and shook hands.

I like the way the Twins organization came to prominence by building from within. The way the Royals are trying to. I enjoyed the Royals beating the Twins this week. But that was not Twins baseball. The team I saw this week looked like a wounded critter looking for a place to die. I guess in a way it was. They’ve had a rough season and the players are probably looking forward to the season being over. I hope the Twins get better this off-season. Next year when the Royals are better, I want them to beat the Twins when the Twins are good too.