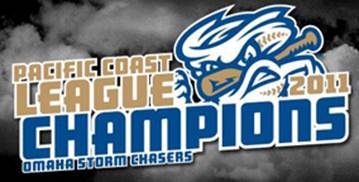 WEST SACRAMENTO, Calif. — The Omaha Storm Chasers began the 2011 season with the anticipation of opening up brand-new Werner Park, the excitement of a new nickname and the promise of a youthful roster packed with up-and-coming stars. They’ll finish it with the satisfaction of being Pacific Coast League Champions.

Left-hander Mike Montgomery – the man who was handed the ball by manager Mike Jirschele on Opening Day – closed out the season with one of the finest performances of his young career, throwing five shutout innings in the Chasers’ 11-6 victory over the Sacramento River Cats Friday night at Raley Field. The win gives Omaha its first league title since 1990, its first-ever PCL Championship since joining the league in 1998 and its first playoff series sweep in franchise history.

Montgomery (1-0 postseason) allowed three hits and three walks in his five innings of work, striking out six batters. He snapped a personal five-game losing streak, doing so in front of family and friends who were there to witness his first-career professional start in the state of California. Montgomery’s teammates also made him feel right at home with an explosive effort at the plate, scoring runs against the vaunted River Cats’ pitching staff early and often.

With two down and nobody aboard in the top of the second, shortstop Irving Falu dropped a single into left-field off Sacramento starter Travis Banwart (0-1). Catcher Manny Pina followed with an RBI double to make it 1-0, and second baseman Lance Zawadzki ripped an RBI double of his own, making it 2-0 Storm Chasers.

In the fifth, another two-out rally gave Omaha its biggest inning of the night. With David Lough on third following a Grant Green error, Banwart and the River Cats elected to intentionally-walk Clint Robinson to get to Kila Ka’aihue, who had struck out in seven of his previous eight at-bats. The Chasers’ first baseman singled home Lough to make it 3-0, then moved from first to third on an RBI double by Falu. Pina drew a walk to load the bases, and Zawadzki came through yet again with a two-run single to make it 6-0. Zawadzki finished the game 4-for-5 with three RBI and the series 6-for-14 with five runs batted in.

The top of the sixth provided more scoring for the Storm Chasers, this time on the club’s only longball of the night. Jarrod Dyson walked to lead off the inning against reliever Justin Souza, and Lough followed with a blast above the wall in right-center, giving Omaha a seemingly insurmountable 8-0 advantage.

The River Cats did make things interesting, scoring three times in the sixth to make it 8-3, then answering two Omaha runs with two of their own in the seventh, bringing the score to 10-5. Back-to-back doubles by Robinson and Ka’aihue upped the Chasers’ lead to 11-5 in the eighth, taking a lot of the wind out of the Sacramento sails.

Reliever Kelvin Herrera, the Kansas City Royals’ Paul Splittorff Minor League Pitcher of the Year, allowed a Chris Carter homer to lead off the ninth, but the River Cats could not muster any further damage. Herrera got Andy LaRoche to hit a slow comebacker to the mound for the final out, setting off a huge celebration on the field as well as back in Omaha at Brewsky’s, where more than 100 fans turned out for a team watch party.

Luis Mendoza was named PCL Playoff Most Valuable Player, going 2-0 with a 1.29 ERA in two excellent Game 1 starts this postseason. He beat the Round Rock Express 4-0 on September 7 and knocked off Sacramento 3-2 on September 13.

With the PCL Championship in tow, the Chasers will face the International League winner and defending Triple-A Champion Columbus Clippers (Triple-A, Cleveland) in a one-game, winner-take-all playoff on Tuesday in Albuquerque, N.M. First pitch of that contest is at 7:05 p.m., with the game broadcast nationally on VERSUS. The Chasers will host a viewing party at the Fire Barn Sports Bar & Grill at 96th Street & Highway 370, just east of Werner Park.