On the surface, the 2011 Royals season is just another in a long string of terrible won-lost records. Their record will not look much different from any other year of the Dayton Moore era, which has not looked much different from the Allard Baird years in terms of wins and losses. But anyone paying close attention should see that this year has been different below the surface in some positive ways. Most importantly, the roster is bursting at the seams with youth and promise. And while the pitching has been a mess, the offense has already turned itself into an asset. With the season’s end near, the numbers are clarifying just how different this offense has been than most in recent Royals history.

Rany Jazayerli uncovered how rare the combined doubles prowess of Billy Butler, Alex Gordon, Jeff Francoeur and Melky Cabrera has been. They have a shot to become the first quartet of teammates to record 42 doubles in a season. As a team, the Royals’ 287 doubles is already the 13th most in team history. They are on pace for 323, which would be second only to the 2006 team that hit 335. (The ’06 squad was not as top-heavy with doubles hitters as this year’s team, but 14 different Royals hit at least 10. They were a bad offense in general, but they sure hit doubles.)

Most doubles per 162 games in Royals history:

The power extends somewhat to home runs too. No individual player is setting the world on fire, and the team is only 11th in the AL in homers, but between Butler, Gordon, Francoeur, Cabrera and Eric Hosmer, the Royals already have five 15+ HR guys for just the fifth time in team history (’77, ’87, ’00, ’03).

While the team ranks only ninth in the AL in walks, their high average (.270) bumps them all the way up to fifth in on base percentage. The AL average OBP has fallen all the way to .322 this season. The Royals are at .328 as of this writing, making them one of only five AL teams to have an above-average team mark. The other four teams (Boston, New York, Detroit and Texas) are probably headed to the playoffs. The below chart plots how the Royals’ OBP has compared to the AL average every year: 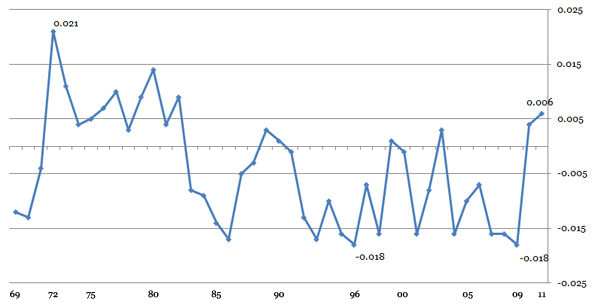 The team has been underwater most years since 1983, but is peeking up above sea level for the second straight year in 2011. The last two year stretch above average was 1989-90. No Royals team has finished this high above average since 1982. Zooming in on the post-strike period shows how different the ’10 and ’11 Royals teams have been in terms of OBP: 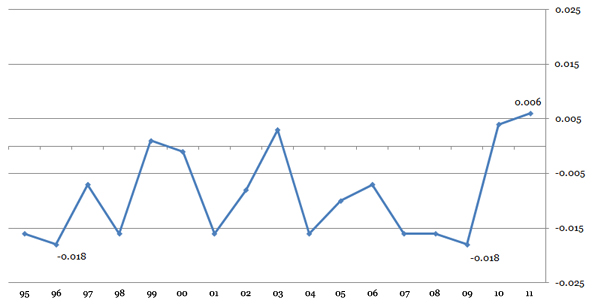 While this is a major improvement by the Royals past standards, it still is pretty much average overall. The team’s slugging percentage is exactly average (.406). So no surprise that the Royals have been almost perfectly average when it comes to crossing the plate: The AL average runs per game right now is 4.43, and the Royals have scored 4.44. The last Royals team to score an above average number of runs was also the last team to have a winning record: 2003.

The question now becomes if the 2012 version of the Royals can sustain or improve upon this level. The short answer would appear to be yes. The names in 2012 are going to look a lot like the names have in the second half of 2011. There are a few candidates to regress significantly, namely Gordon, Cabrera and Francoeur. Still, regressions from those three could be more than offset by expected improvements from Hosmer and Mike Moustakas, a full year of Johnny Giavotella instead of Chris Getz at second, and a full year of Salvador Perez. Pitching is an entirely different story, but the Royals offense appears to be entering an era of respectability not seen in Kansas City for a very long time.