Edwin Jackson has pitched better than any reasonable expectation. His emergence has created a conundrum for Cardinals GM John Mozeliak. How does he build the 2012 Cardinal rotation?

A quick look at next year’s rotation shows four of the 5 slots already filled.

The two most likely pitchers to take the last slot are Jackson and Chris Carpenter. Jackson is a free agent at the end of the season. St Louis holds a club option on Carpenter, who they can either retain for $15M, or buy out for $1M.

﻿﻿Does Mozeliak sign Jackson, or pick up Carpenter’s option?

The Case for Carpenter. This is Carpenter’s eighth year in St Louis. His previous seven season run has been one of the best in baseball history. His 141 ERA+ average for his age 29-35 seasons is the tenth-highest since 1901. You may have heard of the guys ahead of him. He won the Cy Young award in 2005 and finished in the top 3 in CY voting on two other occasions (2006, 2009). Chris Carpenter has had a fabulous career with the Cardinals. He is, however, 36 this season, and has the well-documented history of arm trouble. Basically retaining Carpenter becomes a loyalty question, and a gamble. Does St Louis reward him for his years of superior service? How many pitches does he have left in that right arm? 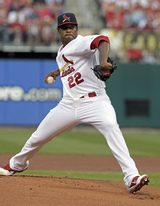 The Case for Jackson. Jackson throws hard, averaging a mid-90s fastball. He gets a lot of ground ball outs, but also gives up a lot of line drives. His FIP- numbers are below average the past 3 seasons. Out of curiousity, I ran some numbers through Baseball Reference to see how Jackson’s career to date measures up historically. For those comps, I looked at players 28 or younger as of 30 June 2011, who have started 80% of their games (Jackson’s started 85% of his), thrown more than 1000 innings, have at least 100 decisions, and an ERA greater than 4.25. You can find the complete list here. It’s a pretty unremarkable set of names, and none of the guys on it became elite pitchers.

Jackson’s past performance does not prognosticate to a lot of future success. He likely will remain a slightly below average major league pitcher. Then again, Carpenter was 49-50 when he came to St Louis from Toronto and look how that turned out.

Politics. The elephant in the room listening to this discussion is, of course, Albert Pujols‘ impending free agency. Most (this writer included) think the Cardinals will have to break a bank to retain Pujols in 2012. The amount of money it will likely take to re-sign the first baseman – widely expected to be north of $25M a season – may necessitate declining Carpenter’s option and using that $14M to pay Pujols.

The other issue is the Colby Rasmus trade. If Mozeliak lets Jackson walk away, he will have traded an elite, young prospect playing a premium position for a left-handed relief pitcher (I have assumed that Octavio Dotel and Corey Patterson do not remain with the club past this season). That will not sit well with the fan base, nor should it. The Cardinals will have sold Rasmus for pennies on the dollar.

The four options open to Mozeliak are:

It is a tough choice. I do not envy Mozeliak. Cardinal Nation looks forward to how this will play out.

Mike Metzger is a life-long Cardinals fan who currently blogs about the San Diego Padres. Follow him on Twitter @metzgermg.