Adam Darowski at the essential baseball nerdery site Beyond The Boxscore recently took a look at the all-time win probability added (WPA) leaders in the World Series. (Click here for a definition of WPA.) What to my wondering eyes should appear but Willie Aikens included in the top 12 batters. Royals fans may know about Aikens’s four home run ding dongs in the 1980 Series, but it turns out his performances in the 1980 and ’81 post-seasons go well beyond that famous feat. He came to the plate 49 times during those Royals post-seasons, and reached base safely 25 times (10 singles, one triple, nine walks, four homers and one reach on error). And, by luck or otherwise, when Aikens did make an out, it never seemed to happen at a crucial time. His worst WPA at-bat in the playoffs was a strikeout that reduced the team’s chances of winning by just 8%. He had nine post-season PAs that helped the team by more than 8%. Aikens’s appearance on the World Series WPA leader board is all the more impressive when you consider he is the only one of the 12 players to appear in only one World Series. Giving a cursory look at the other 11 players World Series performances, I cannot find another one who put up such a high WPA in one series. It is more difficult to appreciate since the Royals lost the Series, but Aikens’s 1980 performance is truly one of the greatest in World Series history.

1980 was Aikens’s first of four seasons as the Royals first baseman. His tenure with the team did not start off well as he played through the after-effects of knee surgery. He had been traded for long-time KC favorite Al Cowens and replaced popular Pete LaCock at first base, so the fans were unforgiving after his slow start. Royals manager Jim Frey said Aikens “was very frustrated and very down for the first two months of the season. The fan reaction was bad and he had started to feel that.” Aikens agreed, saying he was tense and nervous. As his knee regained strength, so did his play. “I started feeling good about the All-Star break,” he said.* He finished the year with a line of .278/.356/.433 (116 OPS+). A nice year, but it was in the post-season where he left his mark.

In game one of the ALCS, he started his post-season career with a bang—his two run single in the third broke a tie and gave KC a lead they did not relinquish. Game two was a relative dud, but he collected three singles in game three to help the Royals sweep the best of five series. 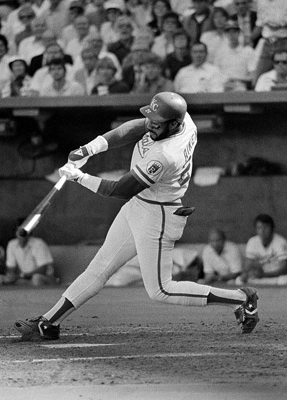 Things only got better once the World Series started. On his 26th birthday, he belted two, two-run homers in game one, though the Royals wasted them in a 6-7 loss. The Royals also dropped game two in spite of another good day at the plate from Aikens (a single, walk and reach on error). The series moved to KC for game three. Finally the Royals would win the franchise’s first World Series game. Aikens tripled for the first time in his MLB career in the fourth inning, and Hal McRae brought him home with a single. His biggest hit of the series came in the bottom of the 10th though. Tied 3-3, with two outs, Willie Wilson on second, the Phillies gave George Brett a free pass to get to Aikens. Willie made them pay by lining a Tug McGraw pitch to the left-center gap, and the Royals walked off winners.

Willie and co. put game four away early with a four run first inning highlighted by another Aikens round-tripper. He added his fourth and final homer of the series in the second inning as the Royals evened the series at two games apiece. The crowd roared for Willie after each homer, and he told The Sporting News, “The two standing ovations today really went deep down in my heart.” 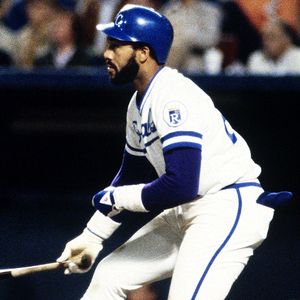 In game five, Aikens did his damage not with slugging but with a single and two walks. His second walk came at a crucial time. Down a run in the bottom of the ninth, Aikens’s base on balls moved Frank White from first base into scoring position. This time, Tug McGraw got of the jam, and the Royals were on the brink of losing the series. Aikens’s bat was quiet in game six, but he still increased the team’s chance for victory thanks to two more walks. He was the only player in the series with a positive WPA in all six games. But with a Royals loss, Aikens’s incredible performance was doomed to be overshadowed. Amos Otis had the second best WPA in the series, but he and Aikens were the only Royals to contribute significantly to the cause, while the Phillies had a balanced attack from an assortment of characters.

The team returned to post-season action the following year, but was quickly swept aside by the A’s in three games. Aikens did not make as much noise this series, but still helped the team’s chances with three singles and three walks. Add up his 12 playoff games with the Royals, and his WPA comes to a remarkable 1.48, tops among all Royals players. 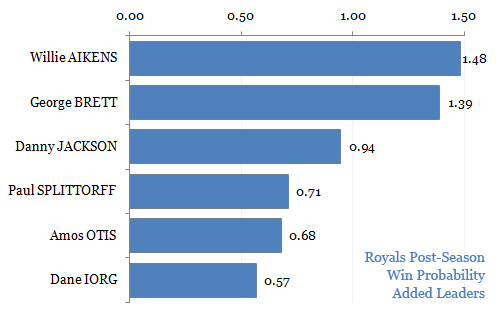