In their quest to plug the fat chasm that is their starting rotation, the Royals have big dreams. They looked at Luke Hochevar and saw an ace. They looked at Kyle Davies and saw “good stuff” (which we now know must have been code for naked pictures of Dayton Moore for as much wiggle room as Davies got). They coddled and nudged and tolerated and bent at the knees before Zack Greinke because, when properly motivated, Greinke deigns to be what is arguably best pitcher in baseball. All the time and hope invested in frontline pitching is well-justified. Without genuine top of the rotation starters, Kansas City will never compete for anything other than primacy in a watery American League Central. I hope the Royals find someone to fill these roles. If they don’t, I will understand. Aces are hard to identify and develop. But my husband may lose it if they cut ties with their best pitcher, Bruce Chen. 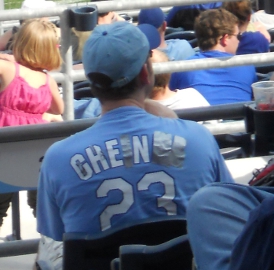 Over the last two years, Bruce Chen is 20-12. Whatever your thoughts on wins as an accurate metric of performance, this is almost unbelievable. Chen is winning at a .625 clip for a team with a .410 winning percentage and his turn in the rotation is familiar, comfortable. Last night’s nine strikeouts notwithstanding, Bruce is relatively unspectacular. He chugs through innings without a dropoff in performance (unlike some some players I know *cough* Hochevar *cough*). Hitters reach base against Chen at a rate of .329 the first time through the order, .323 the second time through, and .335 the third. Like a six-pack of Rolling Rock, a Bruce Chen start promises enjoyable predictability. The Royals, if they hit at all, will be in the game when he pitches. And they are more likely to actually win the game with him on the mound than with anyone else.

Don’t misunderstand: I’m not advocating a four-year deal. I know Bruce Chen is as old as dirt in Major League Baseball years. Seriously, the guy was a Montreal Expo! He was playing professional baseball when Eric Hosmer was five-years-old. But amid the sparkly fun of the minor league promotions, we tend to forget that actual grown-ups can have a useful role. The Royals need Chen next year.

I know that some prefer the dizzying highs and distressing lows of a Danny Duffy start. Like a night of Jell-O shots, a Duffy appearance starts fast, but ends far too early. Others are partial to the eternal promise of Luke Hochevar. And I admit that there is an edge-of-your-seat quality to Hochevar’s starts. Watching him is like drinking Jaeger bombs: everything is perfect until the unforeseen second the world crashes down around your ankles.

Both Duffy and Hochevar may turn out to be much better pitchers than Chen is now, but give me the present over promise. When Chen starts, I know that the game will be worth watching. Too many nights, I tuck the baby in, turn on the television, and find the Royals down 4-1 in the third. While we await the dividends of the greatest farm system in recorded history to pay off at the big league level, I need a security blanket in this time of transition. Bruce Chen is my version of my toddler son’s drool-encrusted blankie. One more year, Dayton. You don’t want to listen to my ten-year-old stepson whine if he can’t make like Will Ferrell and heckle Chen.