Entering the bottom of the ninth inning on Tuesday night in Pittsburgh, Fernando Salas was called on to protect a slim one run lead. He had been successful on 22 of 25 chances so far, and the Cardinals really needed him to convert number 23. Unfortunately, that did not happen. Salas gave up a solo home run for his fourth blown save of the year. Ironically, the Cardinals would lose the game two innings later when newly acquired Arthur Rhodes also gave up a solo home run.

Now trailing the Milwaukee Brewers by 7 games with just 39 left to play, it is only natural to start asking questions about how this can happen. When you do, one statistic screams for attention – this game was the 21st blown save of the year for the Cardinals bullpen. If the Cardinals had converted just half of those into wins, they would have a 1 1/2 game lead over the Brewers, rather than the 7 game deficit they now face.

Lets take a closer look at these blown saves, and see what we can learn.

When you look at how the blown saves are distributed, Fernando Salas is suddenly looking like a pretty reliable closer. Throw in the fact that he is also 3 for 3 in holds, and we might need to look elsewhere for those extra 10 wins.

So, how does Fernando Salas stack up to other closers in Cardinals history – and what about all those blown saves ?

Looking at bullpen save data too much before the Whitey Herzog era doesn’t make a lot of sense. Relief pitchers were used much differently than they are today. Even in the early parts of Herzog’s time, closers were routinely called on for multiple inning saves. Bruce Sutter averaged nearly 2 innings per appearance for much of his time in St. Louis. By the time Todd Worrell had taken over, that number was closer to 1 1/2 innings per appearance.

Let’s take a look at the bullpen efficiency during Whitey Herzog’s time as manager.

The first thing to notice is that successful teams (1982, 1985, 1987) sure seem to have a lot of save opportunities. More than that, they also convert a high percentage of them into wins. That doesn’t bode terribly well for the 2011 group, does it ?

Another interesting item are the number of blown saves from Bruce Sutter and Todd Worrell, two of the most highly regarded relievers in Cardinals history. Even in good years, you could still expect for each of them to fail to convert around 10 saves. Fernando Salas’ 22 out of 26 save opportunities (85%) this year is looking better all the time.

The Joe Torre era, including the transitional year when Whitey Herzog resigned, is among some of the most disappointing seasons in recent memory. One look at the bullpen save rates will tell you all you need to know about them, and why they were so frustrating.

Oh, the save opportunities were there, in abundance. And how good was Lee Smith ?

If it wasn’t Lee Smith, what were the problems during the Torre years ? The games that Lee Smith didn’t get in. It’s as simple as that.

By the time of the Big Man, the closer was a single inning reliever, and used nearly every time there was a save opportunity. And Smith was a machine, converting at a rate that often approached 90%. If you subtract his appearances from the totals, the other relievers were about 50/50 when taking the ball in the late innings.

But even that doesn’t account for the dismal performance in the era. It was those other games that were not save opportunties. Maybe if Torre had a more productive offense, or didn’t leave pitchers like Jose DeLeon in one inning too long, he might have had some greater success than he did.
Tony La Russa (1996-present)

16 years of the Tony La Russa era are hard to distill down into a single metric, but that doesn’t mean we can’t try.

The two best seasons under La Russa (2004-2005) have some of the highest save chances combined with the fewest failures. That would seem to be a good recipe for a championship club. One of those teams went to the World Series, and the other got as far as a legendary Albert Pujols home run off Brad Lidge before falling just short of another trip to the fall classic.

We can thank Jason Isringhausen for a lot of that success, but at the same time we should also praise his supporting cast. When other relievers were called on to make saves, they didn’t disappoint. Even in 2006, when the bullpen efficiency was beginning to trend the wrong direction, they were good enough to win it all.

But there is some bad news in the numbers as well. You can find quite a few seasons with 30 or more blown saves – far too many to have any success. And this brings us back to Fernando Salas because the 2011 team was on a pace to dwarf all of those teams with a new dubious record, all to their own. That is until Salas took over, perhaps aided by an untimely injury to Eduardo Sanchez. The kid that we saw saving games with an almost robotic consistency in Memphis is learning how to do the same thing in the big leagues.

Is Fernando Salas a closer ? Absolutely. 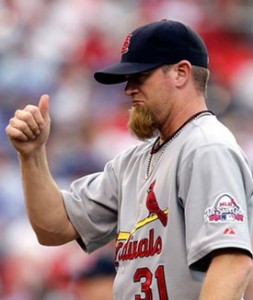 ndo Salas is not the problem with the 2011 Cardinals. The problem is the young man not getting enough save chances. And a big part of that was the manager being too slow to turn the late innings over to the young reliever. If Salas had been the closer on opening day, and assuming his save percentage would remain the same, the Cardinals might have 13 more wins than they do right now, and the Brewers fans would be the ones heading for the ledge.

One last observation, before it gets forgotten. Until Ryan Franklin’s struggles in 2011, he had been an extremely effective closer. Like Salas in 2011, he wasn’t the problem for the 2009-2010 Cardinals. It was too few opportunities because the team had fallen behind and failed to rally late in games. Ryan Franklin had been a very good closer on a team that should have played better than it did.

One thought on “Is Fernando Salas A Closer ?”