The St. Louis Cardinals and the National League Central division crown seemed to be synomonous with each other. Year in and year out it was the Cardinals who sat at the top of the standing, but in recent years the tide has changed. 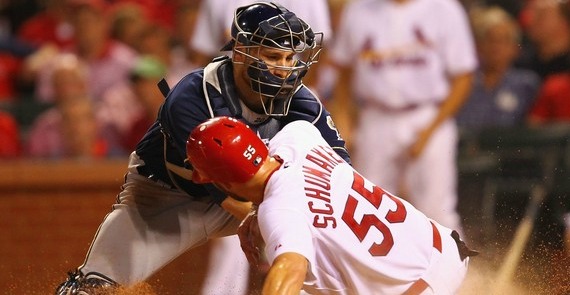 No longer are the Cardinals the lock they once were, especially after last season witnessed them tumble toward the finish line — losing 13 of 15 games during one horrific stretch. The upstart Cincinnati Reds were the Cards kryptonite, winning a few key series down the stretch to show them who the real big boys were.

This season the Cardinals were not even the odds-on favorite to win the division crown, but instead that honor was bestowed upon the Milwaukee Brewers. The Brewers, possessing a potent offense and a great pitching staff were an easy pick over the mostly no-name Cardinals.

However, it was the Cardinals and their under-the-radar acquisitions that made the most noise throughout the seasons early going. It was the Cardinals who sat atop the division, reminiscent of old times while the preseason favorites struggled to play with consistency.

Unfortunately the good vibes the Cards had earlier this season have not continued due to a variety of reasons: The most obvious one is injuries playing a major toll. Perennial N.L. MVP candidate Albert Pujols suffered an injury and faced a DL stint, causing the team to struggle.

In the opening game of a pivotal showdown against the Brewers, rookie righty Lance Lynn suffered an injury to his oblique, most likely sending him to the DL. Lynn has made all of 18 appearances, but already has a place in the Cards’ faithful hearts.

Lynn hasn’t been lights out like other rookie phenoms, but he has been effective out of the bullpen, giving them the spark they need. Since he joined the ranks of the bullpen, the staff has compiled an ERA over a run better than their season average.

With the Cardinals now trailing the Brewers by four games and the date August 10, time is not in their favor, but they have a roster in place that is built to withstand injuries and compete for the division crown.

For years pitchers would never pitch to Pujols because they did not fear the hitter who came after him in the lineup, but those days are long over. The Cardinals, never one to spend big on free-agents, paid an exorbitant amount to keep Matt Holliday after a mid-season trade.

Holliday has supplied St. Louis with another power bat to help take some of the pressure off of Pujols while adding some toward the opposition. However, arguably it has been an under the radar pickup who has supplied even more pop

While Holliday has blasted 18 home runs, obviously still struggling without the benefit of playing in Coors Field, Lance Berkman has found the fountain of youth.

After a year so disastrous that many thought he was done, the Cards took a chance and found lightning in a bottle. Berkman has blasted 28 home runs, which leads the team, while playing adequate defense in the outfield.

With three power hitters in their lineup, the Cards should be fine in the offensive side of the ball. For them to overtake the Brewers, the Cards need to pitch better than them, and win their head to head match-ups.

If the Cardinals play up to the level they had earlier this year, the lights will be on in Busch for October. If not, then a long winter awaits for the Cards and their fans.

Ryan Lazo is a contributing writer to I70 Baseball. He is also a Senior Writer for BaseballDigest.com. He can be reached at RMLazo13@gmail.com, followed on Twitter @RMLazo13 and read his blog Artificially Enhanced.

2 thoughts on “Cardinals Have To Beat The Crew”