When baseball fans look back on this season they will realize that Manager Meyer developed for the Yankee organization one of the most remarkable clubs in minor league history.—Parke Carroll

The Kansas City Blues of 1939 gave KC baseball fans one of the most thrilling baseball seasons this town has known. Blues history stretches back to the 1800s, but 1939 was just their third season as Yankees affiliates, and the evil empire stocked KC with some serious talent. The headliners in ’39 included a pitching staff where an ERA under 3.00 was the norm, a double play combo of Phil Rizzuto and Jerry Priddy and the monster bat of Vince DiMaggio. DiMaggio, older brother to Joe and Dom, had the greatest home-run season a Kansas City pro ever has, Lou Gehrig suited up for the last time in an exhibition in KC, the American Association (A.A.) All-Star game came to town, and the team rolled to a record-setting win total.

DiMaggio had spent the prior two seasons in the majors with the Boston Bees (the franchise better known as the Braves was rechristened the Bees between 1936—40). He was a decent hitter but underappreciated thanks to unimpressive batting averages and, worst of all, record-setting strikeout totals. His 134 whiffs in 1938 set a new major league mark, and in a time when strikeouts were over-stigmatized, he found himself back in the minors in ’39. Blues manager Billy Meyer went to work on DiMaggio’s swing in spring training, opening his stance, correcting a perceived “hitch” and a weakness for chasing high and tight fastballs. The tweaks unlocked some vicious power, the likes of which may not have been seen before or since from anyone playing for a KC team.

The cruel end to Lou Gehrig’s career had started halfway through the ’38 season. His statistics remained strong, but he did not feel quite right, and observers noted he was not moving well. By the time spring training rolled around in ’39, things had gotten seriously wrong. The Blues and Yankees squared off in Florida twice that spring. Gehrig sat out the first contest, which was the first Yankee game of any kind he had missed since 1925. Reporters noted he had been “going poorly” in the spring, hitting .132 and appearing “off in his fielding.” He played in the next game against KC, managing a hit, but “gave a slow motion picture of a first baseman” (March 25 Kansas City Times). Vince watched his brother Joe hit a towering homer in the game.

The Blues regular season got off to a sputtering start, like a car engine that would not turn over right away. Four of their first six scheduled games were washed out by rain, and the two they got in were both losses. In the third game, DiMaggio connected for his first round tripper, a 375 foot shot over the left field fence in Columbus, and the Blues gained their first victory. There was no stopping Vince or the rest of the team for the rest of the regular season once the engine roared to life. After a long road trip, the Blues finally made their home debut on April 26th in front of 14,500 KC fans—the largest opening day crowd among the eight A.A. cities. DiMaggio showed off by pulling another bomb to left that landed on top of the streetcars parked beyond the wall. Both shortstops in the game, Rizzuto and Pee Wee Reese for Louisville, would later be inducted to the Hall of Fame.

Meanwhile, Gehrig toughed it out with the Yankees, appearing in their first eight regular season games to bring his official string of consecutive games to 2,130. But on May 2nd in Detroit, Gehrig told manager Joe McCarthy he needed to be left out of the lineup. His career was over—save one brief appearance in KC.

Over a five game stretch in mid-May, Vince DiMaggio exploded for six home runs. He was up to 13 after just 28 games. The team embarked on a nineteen game road trip in May and June in which they played in all seven out of town parks. DiMaggio tacked on 9 dingers while on the road. By June 7th, after just 51 games, DiMaggio had already hit at least one round tripper in every A.A. park.

The Blues returned home to a huge ladies night crowd of 21,386 on June 9th. The Kansas City Times reported:

Such a crowd, which squeezed from the stands into the left field enclosure and from the stands upon the right field embankment, was the largest here in years. Its size and its enthusiasm gave full proof that these young Blues are baseball idols…And, for such a roaring crowd, the Blues performed in heroic cloth. Vince DiMaggio bulleted his twenty-fifth home run of the year over the scoreboard in the first inning; later he smashed out a long triple to right center.

The crowd swelled to 23,864 three days later when the Yankees came to town for a mid-season exhibition. There was a DiMaggio in center field for both teams. Gehrig had not played for six weeks due to his mysterious ailment. But in KC, “Lou played by popular demand. He hadn’t intended to play at all. But Lou is an obliging fellow and so he consented. After taking one turn at the bat in the second, when he grounded to (second baseman) Priddy, he retired in favor of Babe Dahlgren. But he had shown himself and the crowd roared to his name” (Times). The Yankees prevailed 4-1. The Kansas City Times ran this heartbreaking note the day after the game:

From the Mayo came the terrible diagnosis: amyotrophic lateral sclerosis. On July 4th Gehrig made his “luckiest man on the face of the Earth” speech. 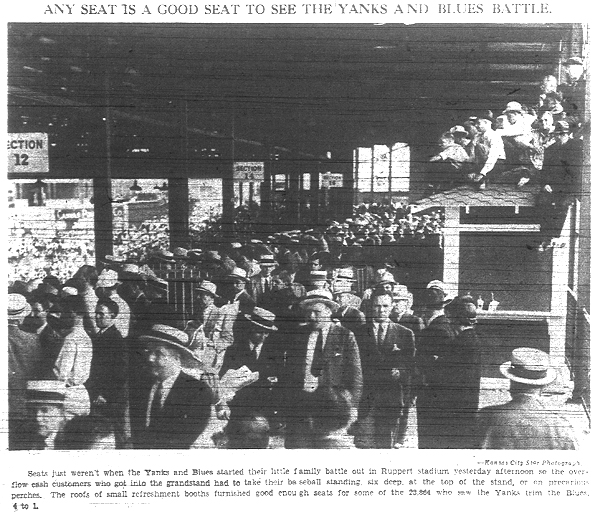 Vince and the boys kept rolling along, and on July 9th won the privilege of hosting the A.A. All-Star game slated for July 18th by having the best record in the league. Their 56-30 mark beat out the Minneapolis Millers by just half a game. The entire Blues squad would face off against an all-star team made up of the rest of the league. The game was pushed back a day due to rain. The KC fans turned out in force again, setting a new A.A. All-Star game attendance record at 16,521. (Attendance was so high throughout the first half of the Blues season “that talk (was) revived of Kansas City getting into the major leagues” according to The Sporting News.) The All-Stars had no trouble with the Blues, knocking them off 19-7. DiMaggio gave the hometown fans something to cheer for with a second inning blast.

Returning to regular league play, the Blues kept racking up victories. But so did Minneapolis. The race for the pennant remained tight all summer, with the Blues usuallly holding the top spot by the slimmest of margins. Two victories over Minneapolis in early August gave the Blues a two game cushion. DiMaggio hit numbers 37 and 38 in the second of those games, which may have impressed Cincinnati Reds scouts. The Reds purchased his services the next day, but he remained with KC through the end of their season. On August 29th, Jerry Priddy, Bill Matheson and DiMaggio combined for back-to-back-to-back home runs in KC.

Heading into a crucial series with Minneapolis in early September, the Blues had stretched their lead to 3½ games. After taking three of four from Minny, aided by DiMaggio’s 43rd and 44th homers, the Blues had all but mathematically assured themselves of the pennant. With their 103rd victory on September 8th, they had done that as well. No A.A. team had ever won more than 102. The Blues won 14 of their final 16 games, and finished with 107 wins to just 47 losses, a .695 winning percentage. They may have been the most winning team in KC baseball history. DiMaggio clobbered a total of 46 home runs. The last one went 425 feet to center. Nearly all the others were pulled to left or left-center. There were no cheap home runs at the Blues home park, Ruppert Stadium (later known as Municipal), where 24 of his dingers were hit: The corners were 350 feet from home, center was 450, and the wall in left was 18 feet high. His 1939 exploits were not limited to round-trippers; appearing in all 154 games, he tacked on 71 singles, 32 doubles and 9 triples while hitting .290 and slugging a ridiculous .636. His defense in center field and base-stealing exploits were also regularly praised in game recaps. 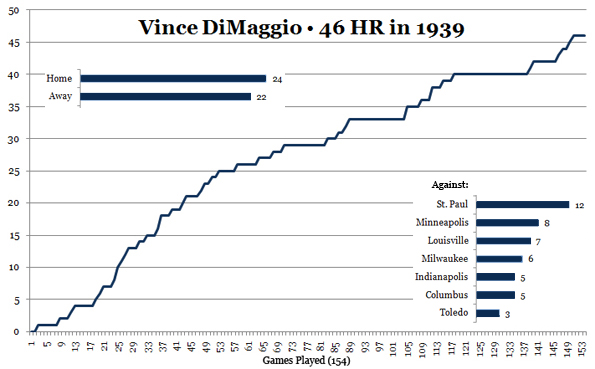 Bizarrely, the pennant-winning Blues were matched up with the third place Indianapolis Indians in the post-season’s first round while the second place Millers were rewarded by facing a weaker opponent in the fourth place Louisville Colonels. Unfortunately, the Blues regular season magic disappeared. Indianapolis, at 82-72, looked to be no match for the Blues. But thanks to “airtight work by the Indianapolis mound staff” (The Sporting News), the Blues dropped the series 1-4 with little fight. Indianapolis outscored KC by an astounding 34-9 margin over the five games. DiMaggio was as befuddled by the Indy hurlers as the rest of his mates, managing just two hits and no homers in the five games. However, one of those hits was a triple that knocked in the only run scored in the Blues only victory of the series.

The day after being eliminated in Indianapolis, DiMaggio found himself back in the majors and appeared as a pinch hitter for the NL-leading Reds in Cincinnati. DiMaggio did not do much damage in his eight games with the Reds, connecting for just one hit, a double, in 14 at bats. The Reds won the NL pennant, but Vince was not eligible to play in the World Series, where the Reds were swept by Joltin’ Joe and the Yankees. Vince stuck around in the majors for seven more seasons, including a few good years for the Pirates and two All-Star appearances. He led the majors in strikeouts six times, but still managed to be a productive player thanks to the pop in his bat. He belted 125 major league homeruns, but he never had another season like he and the Blues did in 1939. Few players or teams have.