Colby Rasmus’ name keeps surfacing as potential trade bait dangled by the Cardinals. Heath Bell is one of several interesting players on a team going nowhere. Would the Cardinals and Padres swing a deal?

Bernie Miklasz dropped this paragraph into his 14 July article.

﻿﻿﻿﻿Let’s face it: Rasmus is Mozeliak’s most attractive trade chip. But it would be asinine to give Rasmus away in a fit of impatience. It would be stupid to hand Rasmus away for a summer rental – a pending free agent like Heath Bell.

Bell is the highest paid San Diego Padre, and is indeed in the last year of his contract. He has also expressed an interest in returning to the Padres after this season regardless of whether or not he is traded, and speculation abounds he might take a below-market deal specifically so he could do that. Bernie Miklasz is 100% correct – trading Rasmus to San Diego for Bell would be foolhardy. The Cardinals would only have Bell in the fold for two months, and despite the best efforts of Cardinal Nation, Bell really connects in San Diego, a military town (Bell’s dad is a former Marine). 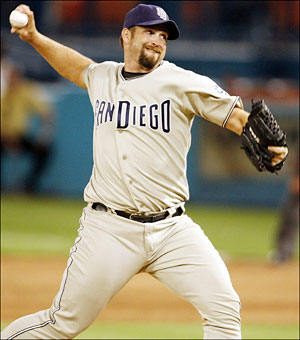 There are two other bullpen arms in San Diego widely rumored to be available, namely Chad Qualls and Mike Adams. Should GM John Mozeliak consider either of these players instead of Bell? Qualls, long familiar to Cardinal fans after his years in Houston, has been a solid member of the Padres bullpen in 2011. He is also a free agent at season’s end; if the team is unwilling to give Rasmus to San Diego for (statistically) the best closer in the National League they certainly won’t do it for Qualls, just another middle reliever at this point in his career.

Mike Adams is a slightly different story, largely because he has one more year of arbitration before he becomes a free agent. Adams has closer stuff, and has been the best and most reliable arm out of the Padre bullpen. Adams’ ERA+ of 272 easily outdistances Bell’s 148. We all know how badly the Cardinals could use a reliable arm at the back of their bullpen. Eduardo Sanchez and Fernando Salas have done well in the late innings, but both are rookies. Additionally Sanchez experienced arm fatigue bad enough to send him to the DL, while Salas has looked a little shaky in his last few appearances before the All-Star Break. All of that makes Adams attractive. 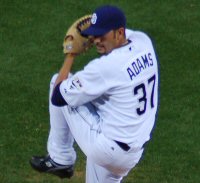 It would seem unlikely Mozeliak will make that move. First, like Qualls, Adams is 32 (Bell is 33). Second, he’s never closed at the major league level. Third, there is a history of arm trouble in his past. Fourth, and probably most important, the one position San Diego has significant depth at is outfield. Not counting Ryan Ludwick – another trade possibility who likely won’t be in San Diego come August first – the Padres boast a budding All-Star in Cameron Maybin, as well as Will Venable and Chris Denorfia on the major league roster. In the high minors they have several OF who could step in, including Aaron Cunningham, Kyle Blanks, Eric Patterson and Cedric Hunter. San Diego has several positions with a dearth of depth in their minor league system, most notably second base and shortstop. Outfield is not one of them. Why would Padres GM Jed Hoyer acquire another player for an already overcrowded position?

Of course, these facts that did not stop SI’s Jon Heyman from speculating Thursday on local San Diego sportsradio about rumors he’s heard regarding an Adams for Rasmus deal.

While the Cardinals will likely bolster their bullpen at the deadline, and while San Diego has the second-best bullpen in the NL at the break, St Louis would be silly to trade Colby Rasmus to San Diego to get one of those arms. Colby Rasmus will not be a San Diego Padre.

3 thoughts on “Projecting Colby Rasmus As A Padre”