Aside from Royals/Kauffman Stadium, I had seen the Royals play in Seattle’s Kingdome, the Chicago White Sox’s current stadium and Minnesota’s Metrodome before last weekend. As soon as the 2011 schedule was released, I had the July 1—3 series in Denver circled. My brother, sister-in-law and nephew are Denverites, so I figured this would be the perfect time for a visit. As it turned out, the series became a great excuse for a family-wide vacation with my wife, son, parents, other brother, other sister-in-law and nieces in tow. I made it to the Friday and Sunday games (skipping the Kyle Davies Experience on Saturday).

My wife, dad and brother headed to the field plenty early for the series opener. My first impression of the stadium was a good one. The brick exterior looks great, and I do enjoy the very un-Kauffman-like atmosphere of a downtown park. Doug Glanville, in his recent book The Game From Where I Stand, mentions Denver had his favorite walk to the ballpark: “Considering Denver is one of the sunniest cities in the country, it was a nice stroll down an outdoor mall, with pedestrian-friendly car-free zones. Immaculate, too.” We did a lap around the concourse before taking our seats. The fir trees in the bullpens and batter’s eye are a nice touch. Once in our seats, our usher talked to us for quite some time, setting the tone of friendliness that we enjoyed from Rockies employees and fans throughout both games. It was as perfect a night for baseball as you could ask for, but unfortunately the Royals never did show up. Rookie hurler Juan Nicasio made the Royals look silly as they hit weak grounder after weak grounder. Not a single Royal reached second base during his eight innings of work. Danny Duffy did what he has done every start so far—mixed flashes of why he is a touted prospect along with plenty of mistakes. He worked six strikeouts into his five innings, but he also served up a self-described “BP fastball” to Troy Tulowitzki. The lopsided play and final score (0-9) was only a minor disappointment that could not spoil an otherwise great night at the park. 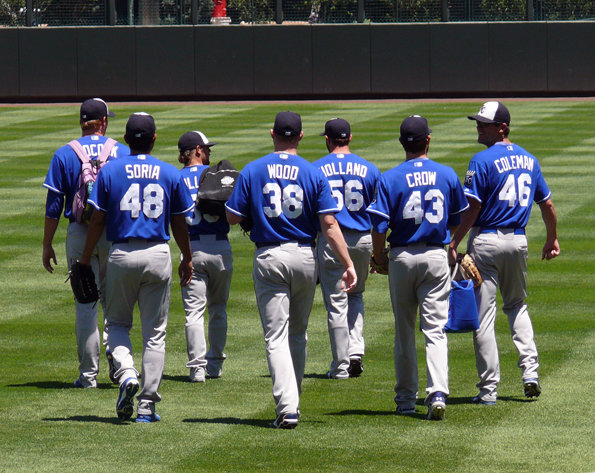 After the Royals were blown out again Saturday night, I was a little more invested in hoping for a win on Sunday. The weather had turned from gorgeous on Friday evening to scorching hot on Sunday afternoon. My dad, mom and other brother had some nice seats 11 rows up from third base, but after baking for a couple of innings, we decided the shade nipping the last few rows in the upper deck looked pretty good. We hiked up, and though the action seemed a mile away from up there, we were much more comfortable. We also gained a nice view of the Rocky Mountains. We were treated to a crazy game. Melky Cabrera got things going in the first with a solo shot, spurring high fives from fellow Royals fans seated nearby, and the rout was on. KC put up 12 extra base hits for just the second time in franchise history en route to a 16-8 win. It was not a pure laugher though. Luke Hochevar was his usual self, cruising through four innings before falling apart in the fifth and letting the Rockies get back to within a run. As beleaguered Royals fans, my family and I were prepared for a full-on meltdown and loss, but the Royals bats came right back to put up six runs in the top of the sixth. From the bottom of the fifth through the top of the seventh, the teams put up run totals of 5, 6, 3 and 4. I do not have the official time, but I am pretty sure it took about five hours to play that stretch. We trekked back down to the lower level to enjoy the ninth inning from behind the Royals dugout and cheered our team with quite a few other Royals fans as the game came to a merciful end. Cabrera capped off a career day (2 HR, 1B, 2B, HBP, 5 RBI) by tossing one of his bats to a young Royals fan. 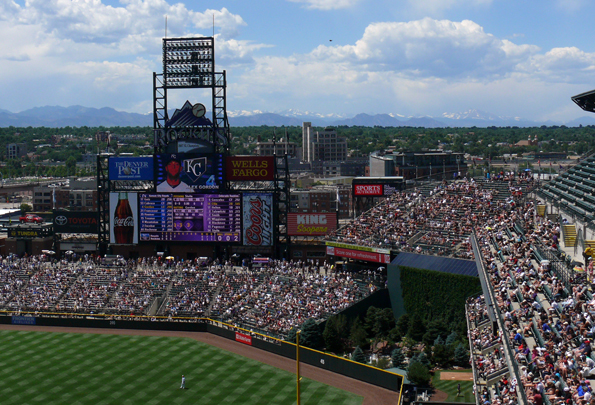 The 10 hour drives each way were killers, but well worth it for a family vacation featuring a couple of Royals games in a new-to-me park. I would rather see the Royals play in Kauffman with a stadium full of Royals fans than anywhere else, but it was a treat to get a glimpse at the road half of the schedule in person. 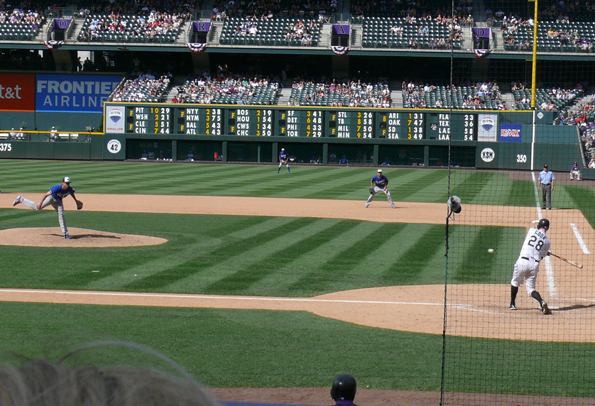 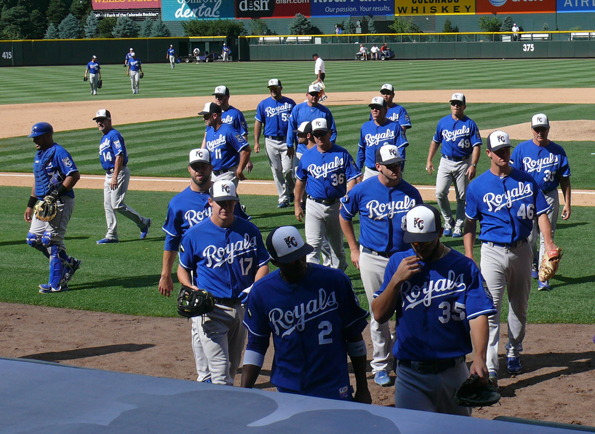