The Cardinals dropped a heartbreaker on Wednesday night, losing to Cincinnati 9-8 in thirteen innings. Games that high scoring and that long have multiple story lines, plot twists, and drama. This one could be summarized in two sentences. The good: St Louis fought back from an early 8-0 hole to tie it in the last of the ninth. The bad: Jake Westbrook got shelled, surrendering a double, a triple, and three home runs in 4 1/3 innings. Let’s focus on Jake. 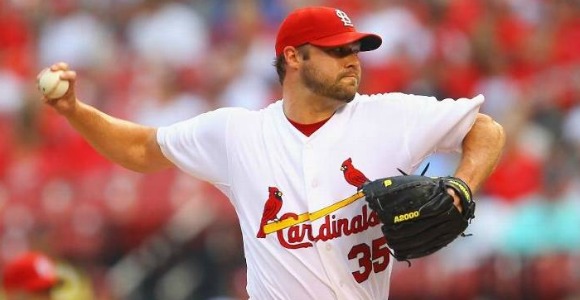 Westbrook has had a rough first half. His 5.34 ERA is ranked 104th out of 111 ‘qualified’ pitchers per Fangraphs (although his xFIP is 4.06, which is only 88th). Last season he rebounded from a nearly similar xFIP with Cleveland (4.24) to post the best xFIP of his career with St Louis (3.51). Last year nine of his 12 Cardinal starts could be classified as quality ones (6 IP or more, 3 ER or less). This year only 5 of 15 starts could be described that way. What is driving his struggles, and can he rebound?

Next, his swinging strike percentage is the lowest of his career. Over all of last season hitters swung and came up empty 7.1% of the time, and it was virtually the same in both leagues (7.2% AL, 6.9% NL). This year – 6.1% of all swings are in vain. Additionally, and perhaps related, hitters are making more contact on his pitches located outside of the strike zone. Last year they made contact on 70% of those pitches; this year it’s 75%. These two statistics support the belief he is not locating as well this year as he did last season. The most obvious symptom of bad location is lots of base runners, and Westbrook has had that in spades. His current WHIP is his worst since 2001. His walk rates are up and his strikeouts are down. Opposing hitters are batting .320 on balls in play, their best mark off Jake since 2006.

Although his location has been off this year, his HR’s allowed have not shown a real spike. Last year with the Cardinals only 9.4% of the fly balls he allowed left the yard. This year it is worse, 13.2%, but with a caveat. This year’s percentage is much more in line with his performance in prior seasons. In 2007 it was 10.2%, 2008 16.7%, and in his half of 2010 with Cleveland it was 12.7%. So although he’s not getting as many swinging strikes, and opposing hitters are making more contact on pitches outside the strike zone, and he’s constantly pitching with guys on base, he’s not surrendering home runs at an abnormally high rate.

Given all that data, we can make one reasonably easy recommendation and one hard one for a better second half. Easy: he should use the All-Star break to re-evaluate how often he throws his slider and cutter, and adjust them to his second-half 2010 levels. Hard: he needs to re-discover his command and locate better both in and out of the strike zone. Better location will drive his base runner numbers down and help him get deeper into ballgames with better results. Otherwise his second half in 2011 will look maddingly like his first.