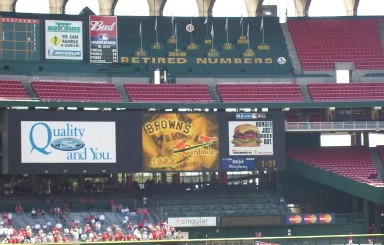 When these two franchises get together – and it has only happened twice, the other occurring over a lazy weekend in 2003 – nostalgia aficionados think back to when both teams played in St Louis, and the 1944 World Series. The Browns moved out of St Louis following the 1953 season, partially because they were cash-strapped, partially because the American League was tired of Bill Veeck owning the team.

Very few folks remain in St Louis who saw the Browns play and it is safe to say no one in Baltimore, unless they moved to Maryland with the Browns, cares they were St Louis’ other franchise some 58 years ago. Anyone hoping the Orioles would dress up like the Browns during this series was disappointed. That did happen once though – during Baltimore’s lone visit to St Louis.

June 7, 2003 found the Cardinals 4 games over .500 and in third place, 2 games behind Houston. Baltimore was 2 games under and in fourth, trailing the Yankees by 5 and a half. Garrett Stephenson and Sidney Ponson started for the Cardinals and ‘Browns’, respectively, and in a sign of things to come Stephenson gave up a first-inning home run to Melvin Mora, staking Baltimore to a 2-0 lead. The Cardinals came right back; after leadoff singles by Miguel Cairo and JD Drew, Albert Pujols doubled to score Cairo. Drew, however, was thrown out at home trying to tie the game. Ponson walked Jim Edmonds next, then got Scott Rolen looking and Edgar Renteria on a lineout.

The Orioles immediately pushed the lead back to two in the second, thanks to a leadoff home run from Deivi Cruz. The score would 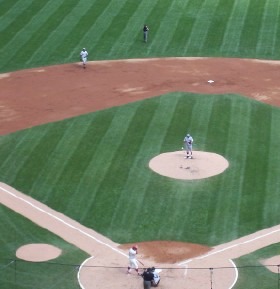 stay that way until Cruz returned to the plate in the fourth and homered again. It was the second, and last, multi-HR game of his career. Stephenson gave up a third HR – in the sixth, to Jeff Conine – and was lifted by Tony LaRussa two batters later instead of facing Cruz a third time. Kiko Calero came in and struck out Cruz to end the sixth.

In the meantime Ponson was cruising. Following the Pujols double he retired 21 of the next 22 hitters, allowing only an Edmonds single leading off the fourth. Dustin Hermanson relieved Calero to start the eighth and promptly gave up singles to Luis Matos and Mora, both of whom scored when Conine followed with a double. St Louis got multiple runners on in the bottom of the inning on a pinch-hit single from Orlando Palmerio and a double from Cairo, but Cairo managed to get hit by Drew’s ground ball to short. Pujols struck out looking with runners on the corners to end the inning.

Baltimore tacked on a meaningless unearned run in the ninth, and Ponson completed what he started, winning 8-1. Ponson threw 29 complete games in his career, and this was the first of three he threw in 2003.

What makes this game memorable? Two things. It is currently the only game the Cardinals have lost to Baltimore. And, it remains the only time since 1953 the St Louis Browns played the St Louis Cardinals.