One of the crucial factors in the Royals quest to contend in the coming years is the bat of shortstop Alcides Escobar. The glove is clearly exceptional, so if he can complement it with a just a little hitting prowess, the Royals will be set at one of the premium positions. The question becomes just how much Escobar has to hit. Escobar himself told the Kansas City Star he feels he needs to have over a .280 average to be one of the best shortstops in the AL. “Baseball men” also talked in terms of batting average when telling Star writer Sam Mellinger how much Escobar has to hit, but we stat nerds can get more exact than that.

To answer the question, you must first quantify what his defense is worth. Defensive metrics are notoriously inexact when compared to offensive ones, but with a large sample size, they can shed a lot of light on just how many runs above or below average a fielder allows. Between 2003—2010, the best shortstop in MLB by Ultimate Zone Rating (UZR) has prevented an average of 17.0 more runs than the average shortstop (RAA). Over the same time period, the metric Defensive Runs Saved (DRS) shows that the best shortstop prevented an average of 24.4 RAA. Here are the averages of the top five shortstops per year between 2003—2010:

Reasonable minds will differ on where Escobar might be expected to fall on those lists. In 2011, Escobar currently ranks second among shortstops in UZR (at 6.3) and tied for second in DRS (at 10). If he plays in 160 games this year, he is on pace to finish with a 12.3 UZR and a 20.5 DRS. It is impossible to know if those numbers reflect Escobar’s true defensive talent level, but they seem to match what people are seeing with their eyes. Projecting how many runs Escobar can be expected to prevent with his defense is not scientific. My guess is 15 RAA a year. It seems fair in that it puts him in rare company without getting crazy and expecting 20+ RAA year in and year out. If anything, 15 is a little optimistic, considering his career UZR per 160 games is only 3.9, but we will assume Escobar plays at the elite level of 15 RAA per year for this exercise.

Escobar can also be expected to add some value as a decent base runner. Fangraphs valued his base running in 2010 at 2.9 RAA. His career rate per 160 games is 2.5, which seems like a good number to use as his true talent level.

So. Plug in those 15 RAA on defense and 2.5 RAA running the bases into this handy WAR calculator (courtesy Jeff Zimmerman), adjust the league average wOBA down to .325 (it was .327 last season, and is .321 so far this year), assume 600 plate appearances, and you can get some answers about what Escobar’s overall value might be at different levels of offensive production.

First let’s get an idea of how much value the best shortstops provide. Here is the average fWAR the top ten MLB shortstops have posted over the last eight seasons (keeping in mind zero is replacement level and 2.0 is roughly average):

Now the payoff. This chart shows what Escobar has to wOBA, assuming my estimations of his defensive and base running values, to reach various benchmarks: 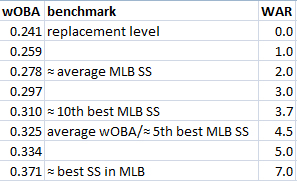 To answer the question, you have to decide what you want in Escobar. Want an average shortstop? He only needs to wOBA .278…which happens to very close to his career mark to date. I think Royals fans want a little more than an average shortstop, even if that would be an upgrade over most of the shortstops we have put up with over the last few decades. Want a nice 3 win player? Look for a wOBA close to .300. To be a top ten shortstop in the MLB, Escobar might need to wOBA .310.

Here is my answer: Escobar needs to wOBA at least .290. In my mind, that would make him a slightly above average shortstop in terms of overall worth, and I could live with that. I think he is easily capable of posting a .290 wOBA in the coming years. To get an idea of what kind of production is needed for a .290 wOBA, here is Jason Bartlett’s 2011 AVG/OBP/SLG line: .249/.317/.309. His wOBA is .289. It’s not asking for much. Given a few more years, his wOBA ceiling might go as high as .320, which could move him up into stud territory. So far in his young career, he has only hit enough to be a roughly average overall shortstop. If he can wOBA .290+ in the coming years, the Royals will really have a shortstop on their hands.

One thought on “How Much Escobar Has To Hit”