The following is a press release from the St. Louis Cardinals organization concerning last week’s “Teams Unite For Joplin” effort. 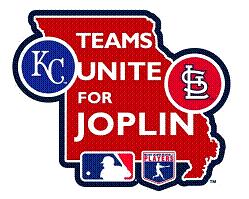 ST. LOUIS, MO (June 28, 2011) – The St. Louis Cardinals announced that their charitable foundation Cardinals Care raised $200,000 to help the children of Joplin recover from one of the most destructive tornadoes in Missouri history.

The Cardinals broadcast partners Fox Sports Midwest and KMOX 1120AM helped raise over $100,000 through first-ever broadcast auctions of once-in-a-lifetime Cardinals experiences. In addition to Cardinals Care volunteers collecting money at the gates, the team’s concessionaire Sportservice sold commemorative “Teams Unite for Joplin” patches, the team’s ticketing partner Tickets.com assisted with taking phone donations and Major League Baseball Advanced Media helped with collecting on-line donations, as well as conducting an on-line auction of autographed and game used items from the weekend that wrapped up on Sunday.

“This was a team effort all the way around, with everyone joining in to help Joplin,” said Michael Hall, Vice President of Community Relations & Cardinals Care. “Tony La Russa, Whitey Herzog and Lou Brock deserve co-MVPs for each agreeing to double their contribution to help the kids of Joplin.”

Each agreed to double their auction experience contributions as Cardinals Care was able to convince three under bidders to match the winning bids on three VIP experiences.

For the first time, Cardinals Care also collected donations via text message with thousands of fans texting to support the effort.

The May 22nd twister that hit Joplin was classified as an EF-5 tornado, the most powerful tornado possible. The storm left 153 dead, put more than 500 people into shelters at its peak and destroyed nearly 7,000 homes, businesses and schools.

While the recovery needs in Joplin are multiple and extensive in the wake of the tornado, Cardinals Care established the Joplin Recovery Fund to help the thousands of Joplin area children impacted by the disaster. Cardinals Care will work in the coming months to identify specific youth-oriented investment needs in Joplin as the community continues the process of recovering and rebuilding.

In the meantime, fans can still help by donating on-line at cardinals.com/Joplin or by texting the word JOPLIN to 32020.

Cardinals Care is dedicated to caring for kids. Since it was founded in 1997, Cardinals Care has distributed over $17 million to area non-profit youth organizations, built 19 youth ball fields in local disadvantaged neighborhoods and currently serves over 4,500 kids in the Redbird Rookies program.

You can download a copy of this press release in PDF format by clicking here.