It seems to be celebrity week at Kauffman Stadium. Ned Yost brought his friend Jeff Foxworthy to batting practice on Tuesday, and Paul Rudd, Jason Sudeikis and Rob Riggle will be at the game tonight playing some whiffle ball, singing “Take Me Out To The Ballgame,” and promoting their Big Slick charity poker tournament. Riggle told 435 South magazine last year, “I’m a crazy Royals fan. Paul, Jason and I determined that we were all at unforgettable game six of the 1985 World Series.” The comedians’ appearance last year at a game provided some laughs and an enduring rally cry for pitcher Bruce Chen (“C’MON CHEN!”). As luck would have it, Chen is starting tonight.

I am not generally interested in the world of celebrity, but, perhaps because the team is playing so poorly right now, this tweet from Kansas City Star sports writer Sam Mellinger piqued my interest:

If Jeff Foxworthy is a #Royals fan now, he is instantly the team's biggest celeb fan, ahead of David Cook and Wayne Simien. #NotSayingMuch

That seems to miss on a couple of points: Jeff Foxworthy is bigger than David Cook? And what about Paul Rudd?

Foxworthy is probably only a fan so long as Yost is around, but we can include him for now. He said on the TV broadcast, “I’m jumping on board right now with the Royals. I want to be here when things explode.” As for Garth Brooks and Rush Limbaugh, I do not think they are actually Royals fans. They do have some connections to the team: Brooks took part in Royals spring training in 2004 to promote a charity, but the Royals are at least the third team with which he has done that. And the Royals paid him to sing “Friends In Low Places” in a Royals jersey to subject fans to watching it at every single home game, but that hardly makes him a fan. Limbaugh is from the area and worked for the team many moons ago, but I doubt he keeps up with them anymore. If you want to include those guys as fans, they probably take the cake as most well-known.

I did not know who Preston Lacey or Wayne Simien are before Mellinger’s tweet. Lacey is from Carthage, MO and is part of the Jackass gang. Simien is from Leavenworth, KS and played the orange round ball sport. 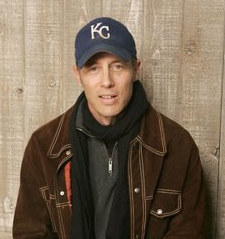 This article throws locals Don Cheadle and Maurice Green into the mix, but I have not found any other evidence that they are fans. Actor Jon Gries, best known as Uncle Rico in Napolean Dynamite, sported a Royals hat to the 2005 Sundance Film Festival. Whether or not Gries is a Royals fan I do not know, but the KC is not typically worn to be trendy. Wichita-born actor David Snell (from The Wire, among others) is a serious Royals fan. The team comes up regularly on his Twitter feed:

Eric Hosmer is reminding me of a guy named Brett!

To get a totally scientific answer to who the biggest celebrity Royals fan is, I have compared how many Google results each name gets: 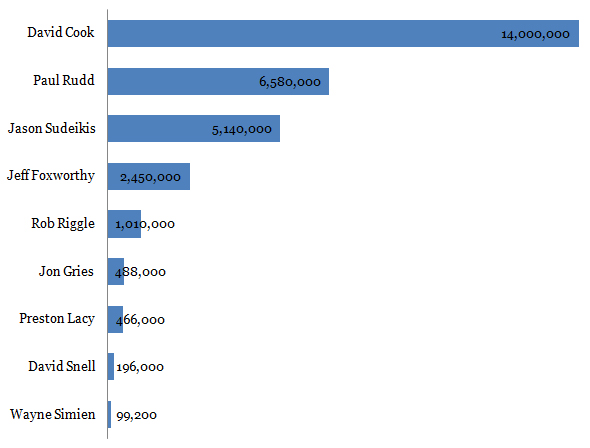 If Cheadle is a fan, he is way up there with 10.3 million results. Cook might get a small bump by having a common name, but he and Rudd at the top seems right to me

Aaron Stilley also writes at his blog Royal Heritage and on the Tweeties.