There are few names that cause a hush to fall over a group of long-time Cardinal fans the way this one does. Eyes glaze over momentarily. Conversation comes to a pause. Thoughts turn to memories of that day. Eventually someone murmurs that they never would have seen it coming.

June 22, 2002. The Cardinals were in Chicago to play the Cubs in a matchup of division rivals. As gametime approached, the stadium was buzzing with confusion. Warmups were not going as planned. Whispers throughout the stadium wondered what was happening. 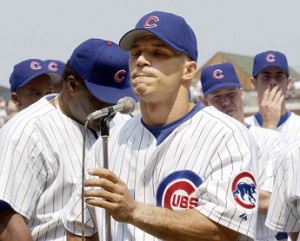 Then, a microphone appeared. Various members of the Cubs took the field. The Cubs’ players association representative, Joe Girardi, walked solemnly to the mic with tears in his eyes.

“I thank you for your patience. We regret to inform you because of a tragedy in the Cardinal family, that the commissioner has canceled the game today. Please be respectful. You will find out eventually what has happened, and I ask that you say a prayer for the St. Louis Cardinals’ family.”

Players left the field. Fans quietly filed out of the stadium. No one knew what had truly happened. No one could understand. Slowly news spread. Even slower came reasons. The answers never came for the question on everyone’s mind.

In 1987 the Houston Astros selected Darryl Kile in the 30th round. While obviously a low-end pick, Kile nevertheless fought his way up the ranks, breaking into the majors in early 1991. During his first career start he had a no-hitter through six innings before being pulled. His career in Houston was bright, making his first All-Star team in 1993 and pitching a no-hitter against the Mets in September of the same year. A few years later in 1997 Kile went 19-7, again making the All-Star team, and making the postseason with the Astros.

After that ’97 postseason appearance, Kile signed as a free agent with the Colorado Rockies. As many pitchers found out, pitches in Colorado don’t do the same things they do in other parks (pre-humidor, that is). Kile’s pitching suffered dramatically, and his two years in Colorado produced ERA’s of 5.20 and 6.61. His career was spiraling, until he was traded to the Cardinals. 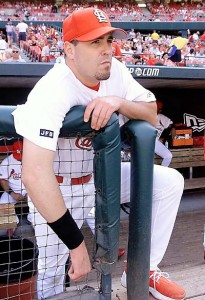 As one of many that felt the apparent healing powers of pitching coach Dave Duncan, Kile’s career felt a resurgence wearing the birds on the bat. In 2000, his first year in St. Louis, Kile was the first 20 game winner for the Cardinals since John Tudor and Joaquin Andujar in 1985. Over the next few years he emerged as the team ace, shepherding several of the younger Cardinal pitchers and being a strong leader both on the field and in the clubhouse.

Darryl’s wife Flynn, twins Sierra and Kannon, and youngest Ryker, were all fixtures at the ballpark, from Family Day on the field to a little catch pregame in the clubhouse with father and son. His family was important to him, and they were held in high esteem by the Cardinals community. The Kile’s were close friends with Matt Morris and his family, among others.

On June 18, 2002, Darryl Kile strode off the mound in Busch Stadium to a standing ovation. He had pitched 8 strong innings, giving up only one run against the Anaheim Angels. The Cardinals won the game 7-2, and with that win, took over sole possession of first place in the National League Central. Sadly for the Cardinals, the joy of victory was short in lasting, as news spread that night about Hall of Fame broadcaster and longtime voice of the Cardinals Jack Buck’s passing away. The team all wore patches for the rest of the season bearing the initials JFB (as seen on Kile’s sleeve in the above picture).

It was a great victory for the team, a sad loss for Cardinal Nation, and the last victory of Darryl Kile’s career. Four days later, Kile did not show up to Wrigley Field on time for the day’s game. Teammates began to wonder. Messages were sent. Calls were made. The news finally broke – Darryl Kile had passed away in his sleep of a heart attack.

The game that Girardi had tearfully informed the Wrigley faithful about being cancelled was made up over two months later, on August 31. Jason Simontacchi was the starter, and looked visibly emotional throughout the game. Kile had been a teammate, a supporter, and a friend. The team added a second patch to their jerseys, and a matching symbol on the wall in the bullpen of Busch Stadium.

The Cardinals seemed to be a team of destiny. They overcame so much, dealt with emotional trauma, and yet responded with resiliency. After their fallen ace pitched them into first place, they never looked back, and the team finished as the winners of the Central Division. As the team ran onto the field to celebrate their division clinching win, rookie outfielder and third baseman Albert Pujols grabbed a hanger from inside the dugout to take with him into the celebration. He eventually handed it off to teammate and best friend of Kile, Matt Morris. 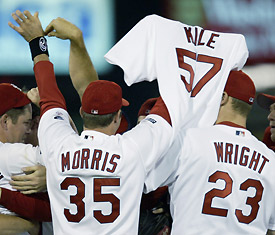 Kile’s jersey never left the dugout throughout the rest of 2002, and his locker remained untouched for years. The Cardinals did not want to forget their teammate and friend. His fans never will.

To find my memories of this story, head over to Diamond Diaries.