Perspective. It’s so important to keep some of it during the course of a baseball season. I recall last summer, when the college football season was starting, and a couple of friends were talking about a particular team they follow. The team was trailing in the 4th quarter, in danger of losing the game. In between hyperventilation episodes, my friends were trying to coach each other out of having a nuclear meltdown over this potential loss. A potential loss. The first game of the season. “If they lose this game”, started one, “the season’s over”, the other finished his sentence.

Now, I don’t know jack about college football. I care even less. What, about this fact, do I feel sets me apart from others in my age/gender demographic who share this lack of understanding? I don’t even pretend to “get it”. My friend John walks around every weekend during the fall talking about “Rolling Tide” or whatever, and there is no shortage of other college football-isms that I don’t get, or care to get. What I do understand is that when your entire season consists of a dozen or so games, and there’s no real playoff structure in place, that each game is important. My friends had to explain to me all the reasons why this team’s “season was over” if they lost the first game. Something about schedule strength, a big (or maybe it was “pac”) 10 or 12 in the SEC East BCS. …or something. To me, “SEC” is the Securities & Exchange Commission. 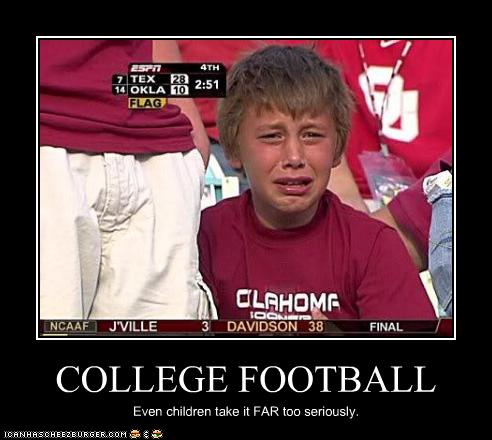 In last week’s piece, I went all “two out of three” on you. Since the Cardinals have gone all “zero out of the last six” on all of us, I thought it worth pointing out that there are certain things about being swept by the Milwaukee Brewers and the Washington Nationals that should be kept in (say it with me) perspective. The Brewers are a good team, and are probably going to be in the National League Central race discussion most, if not all, season long. The Nationals are no joke, and while 2011 is likely not “their year”, they continue to make progress. In fact, at the time of this writing, they are ahead of the Marlins in the National League East. That’s right, it’s mid-June, and the Nationals aren’t in last place. Not saying we shouldn’t have won a ballgame or two or three in D.C. this week, just saying they’re an improved ballclub.

What’s important to understand is that the schedules that I pointed out a couple of weeks ago haven’t completely played out. The Brewers have yet to face the American League East-leading Red Sox this weekend (in Boston), and the Reds have the Yankees coming into Cincinnati in a few days. The Cardinals’ weekend plans? They play the Royals. At Busch. While I don’t think any series should be put under the microscope right now, and I don’t want to place too much importance on this one series with Kansas City. I’m just pointing out the fact that a lot of momentum could change in the NLC over the next several days. And if it doesn’t? Then it doesn’t. Either way, I have doubts that anyone will look back on Father’s Day weekend as the “make or break point in the season” for the Cardinals, Brewers, or Reds for that matter.

Matt Holliday is back from his DL stint, and that should spark the offense enough to start putting crooked numbers on the board a little more often. Adding him back into this lineup certainly adds some protection that’s been lacking during his absence. Carpenter goes Friday night for the redbirds, and though for much of his career, he’s been good for helping the Cardinals stop losing streaks, in his last 10 years against the cross-state rivals, he’s actually 4-5 with a 3.77 ERA.

Finally, I’d like to challenge everyone: Let us all remember that baseball is a game. I’m just as passionate as the next guy, and love this game deeply. But, with this weekend’s “Teams unite for Joplin” campaign, I’d encourage all of us to take a moment to remember the folks in the Joplin area, and the things they’ve been through. Donate your time, money, and efforts if at all possible. (Joplin resident, and Cardinals blogger, Kevin Reynolds discusses ways to help on a recent podcast with me.) If not, donate your thoughts, prayers, and good vibes. Many of the people in that area have lost everything, including loved ones. So, while baseball is certainly something we can all enjoy and be passionate about, let’s keep everything in perspective.

One thought on “A Little Perspective Never Hurt Anyone”