The fans who actually study the statistics and don’t just automatically punch out the boxes next to all of the players on their favorite team on the All-Star ballot are facing some tough choices this season.

With a couple of weeks left in the balloting for this year’s game in Phoenix, no position seems harder to pick than who deserves to be the three starting outfielders in the National League.

Consider that going into Sunday’s games, there were 11 NL outfielders who had played more than 40 games who were hitting better than .300; there also were 18 NL outfielders with more than 30 RBI, and 10 had 10 or more home runs — and you kind of get the idea.

The only outfielder who currently is ranked among the top three players in the league in all of the Triple Crown categories, and thus the only easy choice, is Matt Kemp of the Dodgers. He is tied with Prince Fielder for a league-high 19 homers, is third in the league with a .331 batting average and is second in RBI with 55.

Behind him, however, fans could build a case for any of six other outfielders who all rank in the top 10 in at least one of the three categories. 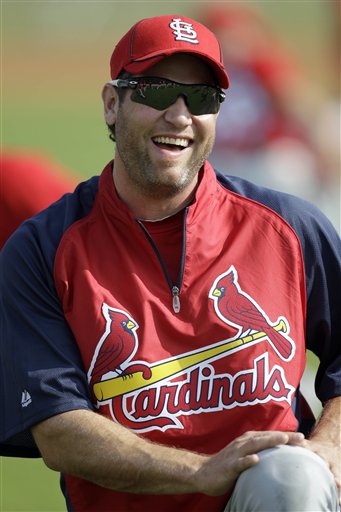 Cardinals fans, of course, are pulling for Lance Berkman, easily the top choice as the first-half comeback player of the year, and his credentials certainly are worthy of selection – 16 homers, tied for fourth in the league; a .317 batting average, seventh in the league, and 46 RBI, tied for sixth in the league.

This group does not include other players having solid seasons who will get a lot of support among their team’s fans – Houston’s Michael Bourne (leading the NL with 26 stolen bases); Cincinnati’s Drew Stubbs (tied for the league lead with 48 runs), New York’s Carlos Beltran, having a good comeback season of his own), Pittsburgh’s young star Andrew McCutcheon; San Diego’s Ryan Ludwick; Arizona’s Chris Young and B.J. Upton, and don’t forget last year’s batting champion, Carlos Gonzalez of Colorado, who is coming on after a tough start.

The group also does not include the Cardinals’ Matt Holliday, who appeared headed to a spot on the team before his latest injury landed him on the disabled list, which will keep his numbers below those of the other top contenders.

That’s a total of 15 players for two spots, which doesn’t add up. At least three more, and perhaps four or five, will be added as reserves, but there will be at least six deserving candidates who are not going to be able to find a spot on the team.

If the only tough choice on the NL ballot was in the outfield that would be one thing, but the competition is just as tough, if not even tougher, at first base.

That group of candidates, where only one player can start, includes the Cardinals’ Albert Pujols; Milwaukee’s Prince Fielder; Cincinnati’s Joey Votto, and Philadelphia’s Ryan Howard. Not to be excluded from the discussion, but most likely to find themselves on the outside looking in, will be Florida’s Gaby Sanchez, Colorado’s Todd Helton and Houston’s Brett Wallace.

Votto, the reigning MVP, has hit only eight homers but has driven in 39 runs and posted a .339 average. Sanchez, the most unknown player in the group, has 11 homers, 41 RBI and a .312 average.

It is not likely that any more than three out of this group, or perhaps four at the most, can earn a spot on the team.

At catcher, second base and shortstop, there is a clear-cut leader at each position, with a strong runnerup choice too. The Cardinals’ Yadier Molina, combining his defensive skills with a better offensive output this season, would appear to be the choice ahead of Atlanta’s Brian McCann, thanks to the injury to Buster Posey. At second base, Milwaukee’s Rickie Weeks should come out ahead of the Reds’ Brandon Phillips, and at shortstop, the choice should be the Mets’ Jose Reyes with Colorado’s Troy Tulowitzki as the backup.

The lost position in the NL is third base, where there really is nobody having an All-Star caliber season, thanks in part to injuries to players like Ryan Zimmerman and Pablo Sandoval. Only seven third basemen have more than 200 at-bats. Ryan Roberts of Arizona is the only third baseman with more than six home runs, and the only two with more than 28 RBI are the Phillies’ Placido Polanco and Atlanta’s Chipper Jones. Polanco is the only one hitting better than ,283.

There is a chance, of course, that somebody will got hot in the next two weeks and put some distance between themselves and other candidates, at any of the positions, but if not, good luck to the voters.

When it comes to picking the pitchers, some might not want to go to the game after what has happened since last year. Six of the nine pitchers who worked in last year’s game for the NL have been on the disabled list during this season – Ubaldo Jimenez, Josh Johnson, Hong-Chih Kuo, Adam Wainwright, Brian Wilson and Jonathon Broxton. The only three who have managed to avoid the DL are Heath Bell, Roy Halladay and Matt Capps, but he was traded to Minnesota.

Changes in the draft coming?

There is a belief around the major leagues that some changes will be made to the amateur baseball draft when the new Collective Bargaining Agreement is approved. Proposals include making the draft worldwide, having a much more rigid pay scale for draft picks, and the possibility that a team could trade its picks, as happens in the NFL and NBA.

What should be discussed, however, is a plan to come up with some other way to compensate teams for losing free agent players other than awarding them extra picks between the first and second rounds of the draft.

This year, there were 27 extra choices between the first and second rounds. The Pirates were “rewarded” with the top overall pick in the draft for finishing last in 2010 but did not get to choose their second player until the 61st overall pick. It does make sense to give teams an extra pick if they don’t sign their first-round pick the previous year, but all of those extra picks totally affect the spirit of the draft.

Tampa Bay, for example, received the 42nd overall pick in the draft for losing free agent Grant Balfour. Arizona got the 43rd overall pick for losing Adam LaRoche. The Orioles, who finished with the second worst record in the AL, got the fourth pick in the draft – and then didn’t pick again until the 64th pick. In between those two picks, their division rivals Tampa, Boston and Toronto picked a total of 19 players, 10 by the Rays, four by the Red Sox and five by the Blue Jays, all for having lost free agents to other teams.

While teams that lose premium free agents such as Carl Crawford, Adrian Beltre, Victor Martinez and Rafael Soriano should be entitled to compensation, it hardly seems fair that teams which lost players such as Octavio Dotel, Jesse Crain, Randy Choate or Chad Qualls should be rewarded with one of the first 60 picks in the draft.

Head on over to RobRains.com and read the rest of Rob’s Inside Baseball this week as he talks about a connection to a past St. Louis Browns famous player and takes a look around MLB and MiLB.