Skip to content
Joakim Soria has been the Royals lone, rock-solid, star presence over the past three seasons, and no one had any doubt he would continue dominating from the mound in save situations this season. The closer role was about the only thing on this year’s Royals team that did not have a question mark by it. Unfortunately, Soria has been downright awful through the first third of the season, and has lost the closer role to Aaron Crow for the time being. Now the crucial question becomes if this is a temporary slump or injury that Soria will come back from, or if he is done as an elite reliever. In the hopes of shedding some light on the answer, I will take a look at other closers in history who have racked up a large amount of saves at a young age. The following list shows all 11 players with over 100 saves before their age 27 season (which Soria is in now):
Provided by Baseball-Reference.com: View Play Index Tool Used
Rodriguez, Street and Capps are all still young and active, so the second part of their careers are still unfolding just like Soria’s is. I will take a brief look at the careers of the remaining seven pitchers from the list to see how some closers who racked up saves at an early age fared from age 27 on. The first number after their name is number of saves before age 27 season, and the second number is saves from age 27 to the end of their career.
Gregg Olson: 160 • 57
Olson suffered a torn elbow ligament at the age of 26 and was never the same. He bounced around in 10 transactions between 1994-2000, including two stops with the Royals. He managed one more big year as a closer after the injury, racking up 30 saves for Arizona in 1998.
Bobby Thigpen: 148 • 53
Thigpen started battling injuries at 26 also. After recording 30 and 22 saves at ages 27 and 28, he only posted one more save and was out of the majors at 30.
Chad Cordero: 128 • 0
Here is the worst case. Cordero posted all of his career saves before his age 26 season, then suffered a labrum tear. He has had a couple of failed comeback attempts but has been unable to stick in the majors since.
Rod Beck: 127 • 159
Here is a better looking career path. Beck continued to be a dominant closer at 28 and 29, and had a one year renaissance at age 34 when he converted all 20 of his save opportunities.
Mitch Williams: 114 • 78
Wild Thing stayed fantastic at 27 and 28 but was done after that, throwing less than 40 innings the rest of his career (including 6.2 with the 1997 Royals).
Ugueth Urbina: 110 • 127
Urbina remained fantastically effective until his career ended at age 31 with an arrest (and subsequent conviction and 14 year prison sentence) for a machete attack/gasoline dousing incident. Hopefully Soria can avoid that.
Bruce Sutter: 105 • 195
This I suppose would be the best case scenario, particularly with that Hall of Fame induction capping things off.
So we have four pitchers who recorded fewer saves after age 26 and three pitchers who piled up a greater number after that age. It is almost like we cannot predict the future. But this graph of the average number of saves the above pitchers posted by age does show how difficult it is to continue the level of performance Soria has held up in the last three years: 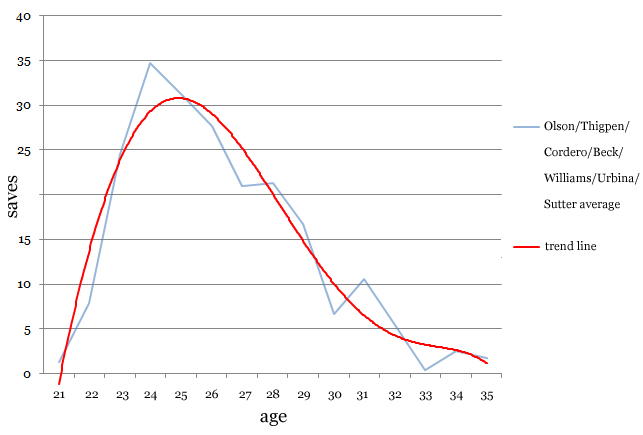 That looks pretty dramatic, but that is not surprising since I cherry picked guys who all were fantastic before turning 27. Some of them are going to flame out and tank the averages. In Beck, Urbina and Sutter, there are precedents for Soria carrying on as an elite closer. Only one of the above examples completely disappeared after turning 27 (Cordero). With a little time and luck, hopefully the Royals can fix whatever is ailing Soria, and he can get back to locking down Royals wins again soon.
Aaron Stilley also writes about Kansas City baseball at his blog here and on the tweeties.