There have been a lot of great tributes to Paul Splittorff the player, the broadcaster, and the man over the last few days. Here, I would like to honor Splitt by attempting to give an idea of just how large he looms in Royals pitching history. The most obvious examples are his all-time club records for starts (392), innings pitched (2,554) and wins (166). He has owned the franchise wins record since 1975, and is in no danger of losing it anytime soon. Splitt faced 10,829 batters, over 1,300 more than the next pitcher on the Royals all-time list. In addition to his incredible longevity, Splitt was also a tie to the very earliest days in Royals history. He was drafted by the club in 1968, a year before the big league team even started play. The Royals selected 21 players ahead of Splitt that day, but he was the first to make it to KC, and the only one to have a long career with the Royals. According to his New York Times obit, he threw the first pitch in Royals history when he opened the Corning Royals 1968 season in the New York-Pennsylvania minor league. He rushed through the minors, making it to the majors for two appearances in September, 1970. His first action came as the starter in Comiskey Park, where all of 693 fans turned out to watch Splitt and the Royals lose to the White Sox. 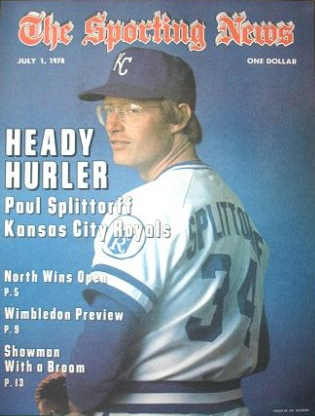 He again etched his name into Royals history by pitching the first ever game at Royals Stadium on April 10, 1973. He rose to the occasion, pitching a masterful complete game marred only by a ninth inning solo home run by Jeff Burroughs of Texas. Splitt and the Royals cruised to a 12-1 victory. It was the first of 20 wins for Splittorff that season.

Paul was a pitching stoic. He didn’t have a whole lot of fast-twitch muscles. On the mound he was big, strong, slow, deliberate, but very graceful and very much under control. A high leg kick, a smooth delivery, ordinary stuff. Three hundred Royals’ pitchers have had better pitches to work with, but Splittorff won 166 games for the Royals, and nobody else has.
—Bill James

Splittorff was never a dominating pitcher, with a not-so-fast fastball and crazy-low strikeout numbers. He relied instead on smarts, ground balls, knowing each hitter’s weaknesses, low walk rates, getting by against righties and feasting on lefties. It was a formula that made him only a good pitcher most days, but maintaining that level of play over 15 seasons adds up to a remarkable career. Plenty of major league pitchers have had a decent season or three, but few have strung together such sustained effectiveness for as long as Splitt did. He is in a group of fewer than 200 members to win 166 games or more.

He’s got a fast ball, slider, curve and change-up. When he puts them where he wants them, it’s a thing of beauty. He knows how to set up hitters. He never tries to overpower anybody, but just with control, he can be overpowering.
—Darrell Porter, who caught Splitt more than any other catcher, July 1, 1978 The Sporting News

Splitt was there as the Royals grew from expansion team to powerhouse in the mid-70’s, helping them make the post-season in 1976, ’77, ’78, ’80 and ’81. Only two pitchers (Dennis Leonard and Larry Gura) have faced more batters in Royals post-seasons than Splitt. Teams managed just a 2.79 ERA against him in his seven playoff appearances. While the team could not get past the Yankees in ’76, ’77 and ’78, Splitt had their number each post-season. He earned victories in ’76 and ’77. In ’78, he left the game with a lead that the bullpen could not hold. While he was not awarded the win, the Royals defeated the Yankees in Splittorff’s start to win the 1980 ALCS. After finally getting to the World Series, manager Jim Frey made the questionable decision to not give Splitt a start in the series (though he was effective in one brief relief appearance).

He gets them over and in good spots. He knows the hitters. He knows how to pitch. He follows his game plan. I’d call Splitt a heady pitcher. He tries to get the double play ball. He doesn’t try to strike out guys, but when he needs a strikeout, he goes after it. He never gets rattled. He’s gotten a lot of mileage out of what he first showed.
—Galen Cisco, Royals pitching coach, July 1, 1978 The Sporting News

It is fitting that Bret Saberhagen made his debut in relief of Splitt in 1984. Splitt retired before the year was out, completing the transition from the great staffs of the ’70s and early ’80s to the next wave. Splittorff of course was not gone for long, transitioning quickly into the Royals broadcast booth. With his passing, the Royals and their fans have lost one of their greatest mainstays and one of the last remaining links to the club’s beginnings.

A few of Splitt’s best games:

One thought on “Remembering Splitt The Pitcher”