After this three game series in Chicago, the Cardinals will travel to Cincinnati for a weekend set against the Reds. Now that Johnny Cueto has been activated from the disabled list, it will also be the first time the Cardinals will face him since the benches clearing skirmish that ended Jason La Rue’s career.

The Commissioners’ Office referenced the Roseboro incident as a guideline for determining punishment for the players and coaches involved in that unfortunate situation, and we have looked at that in a previous I-70 Baseball article. Now it is time to turn our attention to the Cueto incident, and see how the Commisioner did in this case.

The Cardinals and Reds had been battling for the lead in the National League Central since mid-May, with neither team being able to make much progress on the other. At the start of this game, the Cardinals trailed the Reds by two games.

There was controversy from the very beginning of the game, but not the type you would have thought. It was between two players from the Cardinals. A promising rally against a struggling Mike Leake had the makings of a huge first inning. As a result, Brendan Ryan ran down to the batting cages to get ready for his at-bat. A double play ended the rally unceremoniously, and Ryan had to hustle to get on the field in time to start the home half of the first. On the way, he couldn’t find his glove and chose to run out with one borrowed from a teammate. Just before Chris Carpenter was about to make his first pitch, somebody in the Cardinal’s dugout found Ryan’s glove and time was called. The volatile Cardinals hurler gave Ryan a glaring look as he switched out his equipment.

Between innings, Carpenter gave an earful to Brendan Ryan. Unfortunately for the two players, the exchange was captured on camera and replayed over and over.

The game was rather uneventful, and over before the last pitch in the fourth inning was thrown. Both pitchers were able to get through their first three innings without much difficulty. The fourth would be a different story as the Cardinals sent 12 men to the plate. When the final out was recorded, they had a commanding 7-0 lead.

Carpenter and two relievers would combine for the win, giving the Reds three runs in the late innings.

What the Cardinals did not know at the time were some inflammatory comments made by Brandon Phillips. He was speaking to a sports writer from Dayton, and took the opportunity to rip on the Cardinals.

Let me make this clear: I hate the Cardinals.

Oh, the Cardinals would learn of Phillips’ comments before the start of the next game.

Johnny Cueto would get the start for the Reds in the second game of the series. His opponent from St. Louis is the rookie left-hander, Jaime Garcia. Garcia being a rookie may have a significant impact on what was about to happen.

The Cardinals would manufacture a run in the first inning, thanks to a lead-off double by Felipe Lopez.

Things would turn nasty when the Reds came up to bat for the first time.

Brandon Phillips tapped Yadier Molina’s shin guards, as he usually does in his first plate appearance. Instead of choosing a more old-school approach of having his pitcher throw at Phillips, Molina decides to take matters into his own hands. He stands up and starts barking with Phillips. As the two exchange pleasantries, both benches clear and a mob begins to form around home plate.

What happens next is captured in detail in the MLB Video Archives. You can see both the Fox Sports Ohio and Fox Sports Midwest broadcast of the event. In addition to the MLB video, our friends at Viva el Birdos have broken the event down into who did what to whom, albeit with the bias of a Cardinal Fan’s point of view.

It doesn’t matter if you are a Cardinals fan or a Reds fan, this conflict turned ugly. At the back of it all was Reds starting pitcher, Johnny Cueto. He was kicking Cardinals players repeatedly – and while still wearing his spikes. A very dangerous situation, indeed. The concussion that Jason La Rue sustained in the brawl would ultimately cost him the remainder of his baseball career.

What happens next angers Cardinals fans to this very day. Johnny Cueto was allowed to stay in the game.

Perhaps there is something to the notion of karma. Cueto would end up taking the loss, and the Cardinals would pull even with the Reds after this emotional victory. An dominating afternoon win by Adam Wainwright on the following day would give the Cardinals a sweep of the series, and a one game lead in the division. Sadly, it would be their last one as a disappointing homestand followed by a brutal road trip through Washington, Houston and Pittsburgh ended all playoff hopes for the 2010 season.

But that’s not the real end to this story.

A Slap on the Wrist 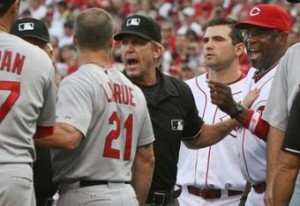 Major League Baseball was about to take punitive action against several Cardinals and Reds players and their managers.

The first failure of Major League Baseball happened immediately following the brawl. In the Roseboro incident, Shag Crawford wasted little time ejecting Juan Marichal. We will never know if he would have done the same to Roseboro because the Dodgers catcher had to leave the game due to injuries sustained in the attack.

Neither home plate umpire, Mark Wegner, nor crew chief Jeff Kellogg took any action towards Johnny Cueto. He was allowed to stay in the game, which in retrospect might have been a good thing for the Cardinals. He was clearly rattled and the Redbirds hitters were able to take advantage of that. Mark Wegner did eject both managers: Tony La Russa (St. Louis) and Dusty Baker (Cincinnati).

Next came the suspensions. Both managers were suspended for two games. It was the suspension for Cueto that raised eyebrows in Cardinals Nation. The big right-hander was given a seven game suspension for his “violent and aggressive actions.” All three were fined an undisclosed amount, as were Brandon Phillips, Yadier Molina, Russ Springer and Chris Carpenter. In case you are wondering about Springer’s fine, it was because he was still on the disabled list, and was not eligible to be on the field when the brawl took place.

Any way you look at this, Johnny Cueto got off with just a slap on the wrist. A seven game suspension meant that he would only miss one start. While the League Office did not know that Jason La Rue’s concussion was career ending, they did know that he had been placed on the disabled list immediately after the game. If the Commissioner were trying to apply the Roseboro Incident here, he really missed the mark. Juan Marichal was suspended for nine games when he took a baseball bat to the helmeted head of John Roseboro. He was also prohibited from making the final road trip to Los Angeles, which forced the Giants to rearrange their rotation to accommodate the ruling. In addition, Roseboro only missed a few games and never went on the disabled list. Even more infuriating was the part that Roseboro played in instigating the confrontation in 1965, which would have been taken into consideration in Marichal’s punishment. The only thing La Rue did was try to get between Cueto and his teammate, Chris Carpenter.

On the subject of fines, even though the one to Cueto was not disclosed, we can make some guesses relative to the one handed out to Marichal. The Giants hurler was fined $1,750, which was approximately 3% of his salary for the 1965 season. Marichal was an established star at the time and was earning the pay you would expect from a top player of his era. In 2010, Cueto was earning a league minimum of $445,000. 3% of that would be $13,300, and that is probably close to what he was actually fined. That amount would be consistent with other players whose fines were made public.

But let’s look at this another way. Cueto just signed a five year deal to avoid his arbitration years. That deal is paying him $3.4M for 2011. 3% of that would be a whopping $102,000. When was the last time you heard a player being fined anywhere near this amount ?

While there were some similarities between the Roseboro and Cueto incident (pennant race, a player using their equipment to injure another), there were some striking differences. Johnny Cueto was not provoked like Juan Marichal. Marichal also stopped hitting Roseboro when he saw that he was bleeding from under his batting helmet. Cueto kept on kicking until the scrum of players broke up.

The biggest difference between these two events is the power that the MLB Player’s Union carries. In 1965, the union was weak, relative to the team owners. As a result, baseball decisions coming out of the League Office tended to favor the position of the owners, not the players. Things were changing quickly, the union was not in the power chair quite yet. A ripple effect of this is that umpires were not shy in taking control of situations on the baseball field.

In 2010, the players union carries much more clout. The implication is that the League Office will not do anything to upset them, and put a future collective bargaining agreement in jeopardy. Umpires, except perhaps Bob Davidson, are less likely to take control of events in a baseball game, relying instead on filing a detailed report and letting somebody else make the decision about what to do, and whom to fine.

There must be something truly special about catchers. John Roseboro originally sued Juan Marichal, but later settled for a much reduced amount without going to court. That was later put behind the two men as Roseboro acknowledged his part in the event and subsequently forgave Marichal for his actions. They two became friends, and their story ends with Marichal delivering the eulogy at Roseboro’s funeral.

The last we heard from Jason La Rue was that the effects from the concussion were still persistent and making his daily life difficult. He also indicated that he has no plans on seeking any civil litigation as a result of Cueto’s attack, preferring to put the matter behind him. That’s already several steps down the path that Marichal and Roseboro took. Mr. Cueto, the ball is now in your court.