Albert Pujols is every general managers dream player. He resembles four key facts that a GM drools over.

#4 Playoff and World Series exposure (he knows what it takes to get there and win, and others in the clubhouse can feed off that and believe that it is possible)

What more could you ask for?

As slow of a start as Albert has had, HE IS STARTING TO HEAT UP.

That got me thinking…

Albert Pujols is all of the above BUT this is most likely his final year in Cardinals uniform. Where could he go next? The 2011 season is looking a tad different for Albert than the prior ten seasons under his belt. Even with seven homeruns and nineteen RBI, his average is down dramatically. He still proves he can hit for power and drive in runs, but he is beginning to remind me of Carols Delgado as opposed to the great Albert we all know too well. Power, production, low average.

Even though age and wear may be getting in the way, this guy can still get a job done, somewhere. I personally think he’s headed to the American League.

The obvious options are Boston and New York. But I think Albert is better than that. I understand Cardinals fans will laugh this one out, but Kansas City is now a tremendous possibility for Albert in the latter stage of his career. I think the Royals are obviously thinking young for the next five years, but in Pujols they can have the guy play DH at ease and fill in at first when need be. He’s close to home and what better way to make gradual strides towards retirement by signing with KC, a team on the rise with the brightest future of any one team.

The Royals would pay him decent cash; he’d be a hit in the clubhouse, and what better guy to role model your youth than Pujols. It’s a win-win, and with Carl Crawford duding out in Boston it gives more reason to shun the big money from the big cities, because its proof that you dont always win in big markets with big paychecks. Boston is playing horrible this season with EASILY the most talent and experience in baseball. I think Albert is intelligent enough to think beyond the dollars. It sounds more reasonable for him to consider more important factors into his decision such as family and location. Plus, in Kansas City, he’s not too far from his Cardinals faithful- just a three and a half hour jot down I-70. He wont miss them too much.

Kansas City of all places is one that is believable this time around -The place that never has money. Baseball really is getting more interesting and unpredictable!

Statistically, (with the slow start included) Pujols shows no signs of slowing down. At 31 he easily has three or four great years left in the tank. We are talking MVP potential years. He is widely considered the best hitter in the game and you can’t argue one bit. He stays healthy and has been through thick and thin in a Cardinal uniform, all the while maintaining what could possibly be the most consistently productive career from a player, EVER.

Aside from his slow 2011, he has never had an off year. NEVER. In the ten years he has played professional major league ball, he has produced nothing short of MVP type play. It’s amazing really. 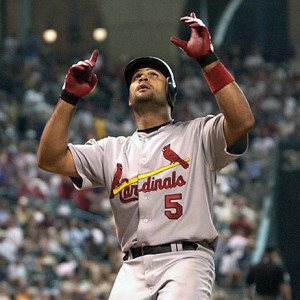 Most players that we consider good or hall of fame worthy started off their careers a little slow, then gradually improved year after year maintaining their hall of fame numbers only to come to a screeching halt due to age, injury, and lack of production.

Pujols shows no signs of this behavior. He started off as a monster and has stayed monstrous for ten years. Same numbers, year after year.

That is like buying a brand new BMW that initially drives like a champ and for the next ten or more years shows absolutely no signs of wear. NONE. Drives perfect. No mileage. NONE. NONE. NONE.

What an investment that is. What an investment Pujols is. By the trend shown in his numbers there is no reason why we should believe he isn’t worth another five-year mega contract. Something you may tend to pay to a 24 year old up and coming super star with a lot of ceiling room.

Pujols is the man. He really is.

Its not realistic and jokingly so, you have to trust that under the numbers he could play to 60 or 100 years old and put up the same stats every year.

All good things come to an end though, but in the stock market-when you see a bull stock such as this-a comet of financially overflowing production and madness- you have to take the risk and put all the money on the table. All in hopes of that one RING. Which Pujols already owns.

The task for Dayton Moore in the front office isn’t convinces Pujols to come to KC. If the money is good then he is in. He and his wife are from here and Pujols knows well that this is a good place for him to finish out. He isn’t trying to get to the Yankees or Red sox to get a title before the ship sinks. He already has one. He has done everything that is expected of a hall of fame caliber player. Titles and numbers get you there -Piece of cake for Albert.

The real task is convincing David Glass to do the unusual in the Royals business. Pay for the big gun and see what happens. Big guns cost more money. More production costs more money. You want something more out of a player? Pay him more. Pujols will produce. So pay him what he is so confident he will do. Pull the trigger Glass. This is your one shot to grab the best on the market. The odds are in your favor and if you don’t take advantage its easy to believe you don’t really care- its bad business for you to pass this up. Its naive and stupid for you to not see this and any excuse will not work.

One thought on “The Pujols Effect”