On a recent broadcast, Royals TV announcer Ryan Lefebvre remarked that no one is complaining about shortstop Alcides Escobar’s feeble bat thanks to his spectacular defense so far this year. His defense has rightfully been universally lauded. Escobar looks like a gold glover, seemingly making a jaw-dropping play every game. After the horror show that shortstop defense has been in KC for the last decade, Royals fans are giddy to finally have a terrific play-maker at short. It does make it easy to overlook how pitiful Escobar has been with the stick. The glove is so good that Escobar’s bat could be merely bad and Royals fans would be thrilled. But unfortunately, Escobar has not been just bad with the bat. He has been an abomination. And it is getting to the point where it can no longer be ignored.

Comparing Escobar to his light-hitting AL shortstop brethren does not make him look any better. Of the 15 qualifying AL shortstops to date, Escobar is far and away the worst hitter. Escobar is last in BB%, OBP, wOBA, wRC+, WPA, WPA/LI, and RE24: 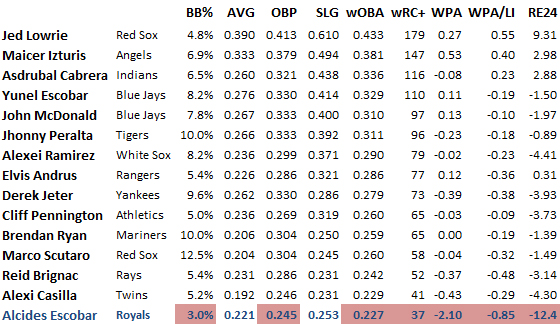 Win probability added (WPA) is not a great measure of a hitter’s talent since it is dependent on many things out of his control, but it is significant that Escobar’s lack of hitting hurt his team’s chances of winning more than any other player in 2010. And now he has jumped out to have the worst WPA in the majors so far in 2011. Combine 2010 with early 2011, and things get really ugly:

Using WPA divided by leverage index (WPA/LI) to strip away some of the chance/luck factor, Escobar still looks like the last player you want batting for your team (adding 2010 and early 2011 again):

How about the worst hitters from the start of 2010 through the present day by weighted runs created plus:

Make no mistake about it – Escobar has been the single worst hitter in baseball since 2010. I am pretty sure no level of defense could make up for that. The good news is that surely he is not this bad. His minor league line over six years was .293/.333/.377. The updated ZiPS projection sees him improving to the tune of .253/.294/.328 by season’s end. I think the Royals could be happy with even that modest production. I love the glove and arm as much as anyone, and am certainly not suggesting Escobar should not be the everyday shortstop for the rest of the year. The Royals have to give Escobar every chance to become an acceptably bad hitter. But as the season wears on, it is getting harder and harder to overlook just how damaging Escobar’s bat has been to the offense.

You can listen to Aaron Stilley discuss this article and more as a guest on the Broken Bat Single podcast, and follow him on Twitter: @KC_Baseball.