Joe over at Cards Droppings does a great job breaking down the series as they come up. We are glad to share that information with you here on I-70 and ask you to click the link at the bottom of the article to read the rest of the material on the home site.

The rain-soaked Cardinals travel south to face their one-time arch-rivals, the Houston Astros. Luckily for everyone who stayed up late watching the Redbirds over the past several nights, it will be dry under Minute Maid Park’s roof. Houston has hit a bit of a rough patch over the past several years, so the rivalry between the two teams has definitely taken a back seat to the newly formed rivalries between the Cardinals and the Reds as well as that of the one between the Cardinals and the Cubs. It’s still fun to go into Houston, and it’s really a lot more fun now that Houston’s lineup has lost a lot of the pop from the early 2000′s, when they featured Bagwell, Biggio, Berkman and many others. I’m sure the homecoming will be very bittersweet for Lance Berkman on many levels. The Astros basically told him they didn’t want him back, so I would be shocked to see Berkman treated with anything but the highest respect. If he gets booed or otherwise treated poorly, it’s a mistake on the part of Astro fans–Berkman wasn’t the one who wanted to leave.

Besides the Berkman reunion, there are many other intriguing storylines that will come into play for this series. The first, and biggest, is Albert Pujols. He was pulled from Sunday night’s game after coming up lame trying to beat out an infield grounder. The team said that it was a mild strain, but it’s not an encouraging sign to see him out of the lineup tonight. He’ll be replaced at 1B by the aforementioned Berkman. Hopefully, TLR is just trying to buy him an extra day with the off day yesterday. Against Bud “Cy Young” Norris, it never hurts to have more lefties in the lineup. Tonight, we see Theriot 6, Jay 9, Holliday 7, Berkman 3, Rasmus 8, Molina 2, Punto 4, Descalso 5 and Garcia 1. It’s a bit of a scary thought that this could actually be a lineup we see next year at this time, albeit on a much more permanent basis. Let’s hope for the sake of Cardinal fans everwhere that we’re able to get Albert signed in short order. Our lineup looks much less intimidating without #5 in the middle of it. We face a lefty tomorrow night, so hopefully Albert will be back in there soon.

Read the rest of Joe’s breakdown of this series by clicking here. 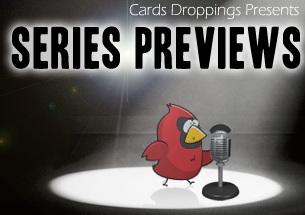