Ryan Franklin is an embarrassment to Saint Louis baseball.

After the recent comments he made regarding Cardinals fans booing him, it’s remarkably easy to label Franklin as nothing more than a baby. He thinks Cardinals fans have a short memory and they have no place booing their own team. He made a ridiculous comparison to being an Oklahoma City Thunder fan, and how he would never think of booing them. He said it’s really tired. Blah. Blah. BLAH.

Well first of all Ryan, THIS IS NOT THE NBA AND THIS IS NOT THE OKLHOMA CITY THUNDER. It is the Saint Louis Cardinals. It is a little more than some uppity basketball team just three or four years from expansion. The Cardinals speak way more of a “team.” I mean this is a multi mullion dollar business you are dealing with here. It is one of the oldest ones on baseball Wall Street that is not going anywhere soon. It is here to stay and a staple in the American pastime. There is no place in this city for Ryan Franklin to question the fans and their class. The fans of Saint Louis know their baseball. They understand success and there is a gold standard that is unspoken but well known. When any action (such as this) pushes the boundary of the traditions set by this historical baseball hub, the fans realize it and have every reason to act accordingly.

Here are some facts:

1.) Franklin gets paid millions of dollars

2.) He has not been performing to the level of his paycheck

3.) He does not think its right to get booed for poor performance

They booed because Ryan Franklin represented the team in a way that wrongly expresses the team’s true kind. He blew four games early in the season. The fans expect more. They expect more whether it be April or September because that is what Cardinal baseball is. It is a land full of expectation and if you, as a player, do not live up to those expectations, you are going to hear about it. That is what makes baseball the great sport that it is. When you play for a team such as Kansas City, expectation is extremely low. A 10-5 start gets people looped into thinking World Series ring. They do not know any better. They have been so horrible for so long that any ounce of success forces them to over react. So much so that they eventually set themselves up for a huge let down.

The reason it is easy to jab Franklin in this situation is because of this…If he were to save fifty straight games and no one applauded him, he would probably be bashing the fans as well. But we all know that is not the case. That is what makes people say Saint Louis fans are baseballs’ best. They know the history of their team and if you represent them well, you will be rewarded with praise. They will cheer you. They will eat you up and love you endlessly. Break a few records and they will create something similar to “Big Mac Land” in the outfield. They will forever instill in your heart how great you are and once were.

Sadly enough, Ryan Franklin is too spoiled, naïve, and mentally blurred to understand how great he has it. He is frustrated, it remains clear. But once you try and bust the fans, you have gone wrong. 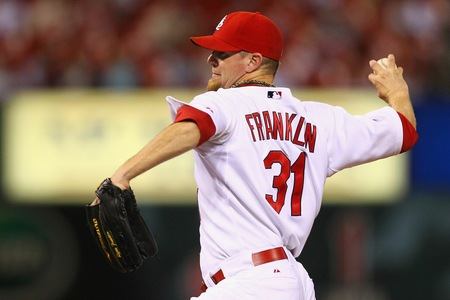 Admit that you have stunk. Admit you made mistakes. Admit you are underachieving. Then go back to the mound, do your job, or simply retire because you do not have anything left. Do not go out this way. Do not go out on a negative note and leave baseballs’ best fans despising you forever. Just shut up, do your job, and move on… one win at a time. Easier said than done, but the last thing you should do is say the fans are out of line. You get paid millions of bucks so there are no longer any excuses. Back up your pay or hear negative jeers.

In Saint Louis, you win now, tomorrow, and forever. If you lose and you play poorly, then something is wrong and it is the job of the Saint Louis fans to make the team (or player) aware of their faults… to make the team aware that they are off the parallel tracks of greatness. That is the price a player pays for signing on with a team that is inbred with a history of success such as New York, Los Angeles, and Saint Louis.

When the Cubs play bad, “it is just those damn Cubs,” they say. It is the friendly confines and even though the team cannot win, let’s drink a beer, down some dogs, and enjoy the afternoon.

Well not in New York, Los Angeles, or St. Louis. Not in baseball. You must win. You must represent the story Saint Louis has always told. History. Championships. Musial. Gibson.

Ryan Franklin, it would be best to probably sack up, stop your whining and find a way to be an effective pitcher again.

2 thoughts on “The Fans vs. Franklin”