Before the season began I predicted the Cardinals to have their worst season in the last decade. I couldn’t and still can’t see why they would win this division and how they could compete. I think their time is ticking away as far as the Tony LaRussa era goes. I think John Mozeliak is still trying to find his identity with this team and I feel he is trying to hold this team by a thin rope as it hovers over the end of a cliff.

But still after all this banter, and a thorough study how the statistics accumulate, it’s a trying time trying to figure how the Cardinals are playing .500 baseball with such acceptable performance.

Yes I know Pujols has started slow, batting below .250 and lacking his usual dominance. But the production of Matt Holliday and Colby Rasmus is outstanding so far, and Lance Berkman is playing in league of his own. The Cardinals are in second place at the current moment, but at the same time they don’t look like a second place team. The numbers prove that they are though which makes this strange. The pitching rotation AS A WHOLE is looking very solid. I’m simply confused. Is it the National League Central that’s horribly weak? We knew the Reds would be back to contend, but the Brewers are flat and the Cubs, Pirates, and Astros seem to be still stuck in their losing ways. Are the Cardinals going to be fighting for this division simply by default? While the numbers of the individual players look impressive, they are still finding ways to lose half of the time.

Right now it seems like a classic tale of an inconsistent team. Last night’s game against the Dodgers proves my point as Matt Kemp hit a walk off to give LA the win 2-1. This year you just never know what you will get with the Cards. Players will continuously become hot, leading the Majors in several different categories. Players like Jaime Garcia will shine and continue to mow down batters, but still the Cardinals will find a way to fall short. The individual efforts will at times shovel out a win, but there is something about this team that prevents them from breaking out into the spotlight. As confusing as it can be, us as baseball analysts can only point fingers to one area in this circumstance.

If the hitters are putting up the numbers then pitching is next in line for blame. We all know that baseball is a team game and its not determined by individuals but after looking at how productive the hitting and pitching has been. The problem now turns to Ryan Franklin and its time to make the change. Four blown saves in the first month of the season? Not a good indication of productive play. 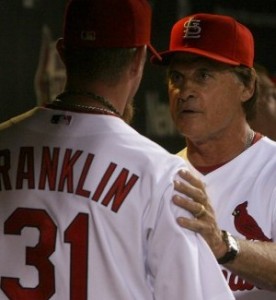 You hate to place the blame on one man, but it’s easy to do in this case. While the Cardinals are currently 8-8, they should be dominating the division right now at 12-4 if you remove those blown saves. They realistically have out played their opponents in twelve out of the total sixteen games played and if that was truly their record we wouldn’t have this confusing discussion in the first place.

The Royals are 10-5 are in second place. They are playing team baseball and when they get beat, it’s because they were outplayed. When the Cards lose, it’s because they beat themselves. It’s a good problem to have because its something they can control. So I think it’s time to control it and remove the problem in Franklin. If you don’t’ perform in the MLB you don’t have a job. At Franklins expense, the Cardinals are not looking as pretty as they have worked to be. They numbers are there. They are doing what they have to do offensively and defensively to win this division. They are just BLOWING it.

So I have tried my hardest to avoid the Franklin problem, but after a forth early mishap, its time to lay the hammer down.

The Cardinals are exceeding my expectations drastically! Once Pujols gets back to form they can be dangerous if they keep playing the way the do. Look for Mozeliak to make the cut on Franklin and if the numbers still play out, look for the Cardinals to jump into first place in the Central.

With a new closer of course.

2 thoughts on “Quite FRANKLY A Blown Opportunity”