This time of year, you would be hard-pressed to find me as close to obsessed with any other external factors as I am with baseball. But one thing ranks right up there—tied for first, some might say—on holding my attention, and that is music. It is especially true on this day…Record Store Day. And while music and records are not often talked about on this or any baseball blog, I can very specifically connect my audiophile and baseball-obsessed personas through the 1982 St. Louis Cardinals.

The early 80s were a much simpler time. Video—the tape kind, not digital—was still relatively new technology, computers were for either the super rich or the super nerdy, and the news was delivered to you on a thing called paper, using real ink. Remember when you watched Back to the Future Part II, when Marty McFly got razzed by kids when he had to “use his hands” to play the video game in the 80s café? Well that essentially takes place now…and the stuff we had in the 80s is just as archaic as it was portrayed in that movie (seriously, go back and watch that movie…those writers were scary close on a lot of things). And although CD technology was around, records and cassettes were still the dominant home audio media.

The baseball experience was different, too. Not as many games were televised back then, because pay television was still relatively new; virtually no sports were broadcast on cable or satellite TV. So watching the game meant watching the network or an independent local station like KPLR. The main outlet for experiencing baseball as it happened from the comfort of home was to listen to the radio. St. Louis Cardinals fans were just about the most spoiled in all of baseball in the 80s. Not only did they get to root for one of the dominant teams of the decade as Whiteyball peaked at Busch Stadium, but they had Jack Buck and Mike Shannon to tell them all about it every night. Imagine listening to Buck describe the defense of Ozzie Smith, the fire of Joaquin Andujar, the speed of Willie McGee, and the dominance of Bruce Sutter every night. Throw in the folksy charm of, by then, seasoned broadcaster Shannon and it was like listening to baseball poetry flow through the walnut-enclosed speakers.

And that is where records come in, one in particular. I had just turned five years old when the Cards won it all in 1982 so I really lacked the appreciation that event deserved at the time. I know I watched the win from my grandmother’s house in Cahokia, IL, because my uncle drove the five minutes or so to Busch Stadium during Game 7 to get me a souvenir. I have no memory of any of this, but it’s a nice story to hear once in a while at Thanksgiving. And remember, this was the 80s. Buying the DVD collection of each game broadcast as a keepsake was not an option. No, in those days, if you wanted to relive an event like this, you bought a record album. And the Cardinals released “Busch Beer Presents: Celebration” to commemorate the win. My dad bought a copy, and I loved listening to dad’s records as a kid. 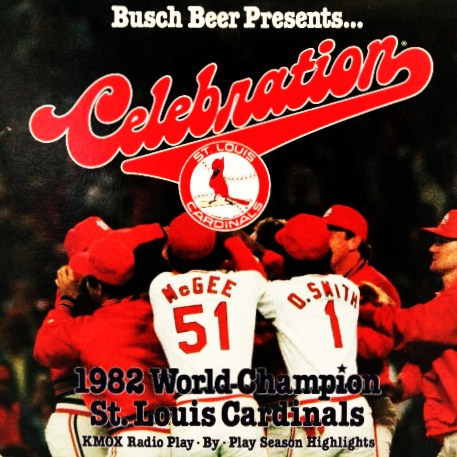 “Celebration” is a full-length album, narrated by Buck, containing radio broadcast highlights from the regular season on side one and NLCS and World Series highlights on side two. It is truly the soundtrack to my introduction to Cardinal Baseball and all that was great about it in the 80s.

First and foremost, Buck’s narration is superb. It’s kind of like listening to your grandpa read you your favorite bedtime story. And the highlights are gem after gem of broadcast excellence, too. Maybe I have just listened to the album so many times the words are burned into my brain like Bible stories from Catholic School or the lyrics to my favorite songs. But I can hear the inflections and excitement in my head just thinking about the recording. “Not many picked the Cardinals to win it all in 1982,” states Buck to start the album on side one. And the end of side two, of course, culminates with a line nearly every Cardinals fan knows by heart: “Sutter from the belt, to the plate…a swing and a miss! And that’s a winner! That’s a winner! A World Series winner for the Cardinals!”

My dad also has the record from the Cardinals’ 1967 championship season. Historically, that one is just as significant for those that want to hear what it was like to have both Buck and Harry Caray at the mic for the Cards. But that didn’t really interest me as a kid; all of it happened too long ago (though I appreciate it much more now). “Celebration” was full of players and broadcasters I knew and loved, even if I didn’t quite remember the events when they first happened. It was a regular in the rotation when I was allowed control of the turntable.

The album is long out of print, I’m sure. I doubt it was ever released on CD, and I have yet to find it on iTunes. Occasionally, I stumble across the LP at the flea market or a yard sale. So “Celebration” truly is one of those rare pieces of Cardinals history that I love knowing so well. But while I wake up early to buy more records at local indie stores, you can rest easy knowing modern technology has not totally let us down.

There are six parts in total. Happy Record Store Day, and Go Cards.

Chris Reed is a freelance writer who also appears on InsideSTL Mondays and Bird Brained whenever he wants. Follow him on Twitter @birdbrained