Luke Hochevar is the so-called “ace” of the Kansas City Royals. Fully displaying the full meaning of that term on the mound is a task of the masterful. Hochevar, in honest words, has been mediocre from the gate. Mediocre should not be a descriptor for the “ace” of a pitching staff. But that’s what we have SO FAR in Hochevar.

He is a pitcher with all the physical attributes to be a superstar, which is probably why the Royals drafted him in as their number one pick. He was the perfect blend of a player that a pitching coach could fine tune in the most productive way. A player with more ceiling room than most. So the Royals took a chance.

Bob McClure has worked extensively with Hochevar in attempt to formulate the high caliber pitcher the Royals envisioned. He has yet to be that player. But there is something changing in the way he has performed. The first two starts this year simulated typical and almost expected results. A smooth delivery, a late rising fastball, and a hanging curve that clean up hitters knock into next week. Hits have scattered the field, players have reached base, and many runs have been tallied.

In his last start Sunday afternoon in Detroit, Hochevar looked oddly different. The scoreboard remained the same, and the home runs were still given up, but there was something off boundary about the Royals ace on Sunday. Sudden changes.The fastballs were far more controlled across the plate. The speed of them lacked their usual aerodynamic way and looked heavier, perhaps covered in molasses, but far more accurate. The curveball still hangs in the kitchen, but the fastball resembled Maddux, no longer Prior. A feeling came upon me that location and the actual concept of “pitching” was of higher importance to Luke rather than blowing one high and tight by a hitter in hopes of him not connecting. A higher IQ was established on Sunday and that seems to be a promising sign for the Royals. Could it be maturity? Did he all of a sudden realize overnight that he couldn’t last an entire season by trying to beat teams with only his body? Is the mental game of baseball finally a priority? 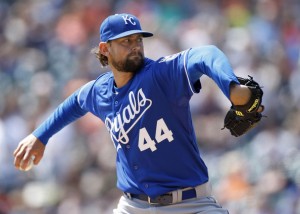 Brian Bannister had the brains to be a success in baseball. Luke Hochevar has the physical capabilities. It’s the player that engages both qualities of brain and body that eventually wins the CY Young award.

I’m by no means saying Luke Hochevar is CY Young material, but I sniffed a plate full of conspiracy when he was only throwing 84 mph multiple times with tremendous location. He was a different pitcher in his third appearance. The inconsistency has always been an issue with him, but Sunday was different. He was a better player but I have a strong feeling he really made an effort to think before he threw the ball. Such a rare occasion it seems for a player who has always just “got by” off his pure talent.

A look at the numbers…

This is much more of a complete performance that we would EXPECT from an ace. Could this be the sign of things to come? Royals critics usually are very watchful when such spectacles occur. It gives them hope. Most of the time, as in the Hochevar case, this could easily be the same sign of inconsistency fans in Kansas City are so accustomed to.

Could the ace of this pitching staff be making a stride mentally?