I must admit I’m thoroughly surprised. Not at the early struggles in Saint Louis, but more so the early struggles of the Los Angeles Angels of Anaheim. Their lack of production and will to succeed has led to a winning start in Kansas City and gave the Royals their short-lived time in the sun. Don’t get too over your heads Royals faithful, this success will not last.

I was in attendance during Saturday’s game at Kauffman Stadium and let me tell you, the Royals are still a poor team. They still have no clue what actual role they play. They don’t know what they are capable of. They must be shocked that they are 3-1. But I understand their early success. They should thank the Angels for their lack of competitiveness. Talk about a ball club that has all the talent in the world to whip the Royals, but simply doesn’t have heart to produce a solidified win. Yes, they have aged in the past couple of years, but they had the advantage over the Royals in each of the first four games. Better pitchers, better hitters, and better coaching- all of that combined with way more experience. It was simply a team that wanted it against a team that didn’t. The Angels are better than the Royals. But the Royals wanted it more and the Angels just wanted to go home. The Angels bullpen is showing signs they might be the weakest in the league. If Chris Getz and a no name back up catcher are single handedly winning ball games against you, something is missing. I think it’s a lack of heart. Was it the fan base that gave the Royals the much-needed boost? No.

On opening day Kauffman Stadium was filled to the brim. The Royals lost. In game two the stadium was half full. The Royals won. On Saturday, one-third full- mark another win in the books. On Sunday, barely anyone, Royals win! 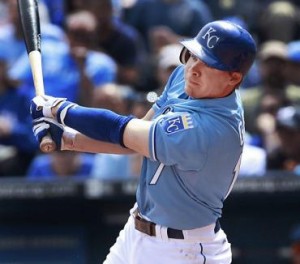 There are bright spots from any win in Major League Baseball. For the Royals, it’s easy to figure. The Royals are getting production from every player they DIDN’T expect to get production from. Getz especially, but with Treanor coming through in clutch situations and solid relief pitching, we can say that the Royals are thus far playing on a more “complete” level than we anticipated.

Kyle Davies looked inconsistent at times, but his first appearance was appealing. He gave up a fair amount of hits, but got himself out of some sticky situations. Aaron Crow is on fire and reminds me of McDougal in 2003, loaded with tons of confidence and firepower. Whether those attributes remain steady is all a matter of time.

I love how Yost is giving Kila Ka’aihue the nod at first base. I think it’s a great move for the ball cub to let Billy Butler solely focus on driving in every run he possibly can. It nice to see the Royals do something that I actually agree with.

The Royals are squeaking their way to victory so far and it’s encouraging to see the underdog finish in the win column three straight games. Two of them in walk off fashion. The Angels shouldn’t be too stunned. I think this series gave them just what the doctor ordered and provided them with the perfect indication that they are facing serious problems. With the Orioles controlling the AL East, the Royals clutching up in the first series, and the Rangers dominating the West, the American League (so far) is looking unpredictable in the fullest degree.

I know we are only one series down, but teams like Baltimore, Kansas City, and Texas who are off to a fast start, all have tremendous futures by rumor. It’s nice to see Boston shell out a monsoon of dollar signs, only to find themselves in a 0-3 hole to start 2011. But unfortunately we aren’t talking about a 16 game NFL schedule here. This is baseball and there are 159 games left to play out. Such a decent start in Kansas City is already ticking away, as most expect the team to run out of breath sooner or later. Boston will be fine, New York will be fine, and those Angels (aside from a horrendous bullpen performance) will most likely be fine too. It’s baseball. Money talks. You spend it and you usually reap some type of long-term reward. You don’t spend it, you usually got what you paid for.

Who wouldn’t love to see the Royals take this small run all the way into October? It’s what any good man would want. Witnessing a battered and beaten franchise, command a league while at the same time being the underdog in nearly every game they play. It’s the American Cinderella fairy tale. I just don’t believe the Royals have all the pieces in the right place to make it happen during the course of an entire season. The Angels have problems. The Royals took advantage of those problems. The Royals have problems of their own and most teams they play won’t be as dreary and dumbfounded as the Angels were. The Royals won’t win many series with the way they played this weekend. Better performance is needed to come out on top.