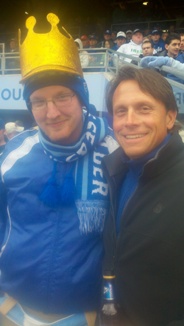 Opening day 2011 was not a phenomenal one, at least not for the actual game. Opening day is always a bit more of a party than it is a game for many. The parking lot was full of tailgaters and I contributed a bit myself – including getting a bunch of folks together for a champagne toast at 2pm to officially kick off the season. There were great festivities inside and even Joe Randa was walking around. The Royals had pregame videos and people on the field and of course, newly retired Mike Sweeney. Bo Jackson was in attendance and he hasn’t been in KC in a while. All the festivities were happening in and out of the stadium to kick off the season. Oh yeah there was a baseball game, too.

The Royals, full of hope, led by Luke Hochevar, rolled through 3 innings with both teams tied at zero. The Angels however brought the party crashers in the 4th led by Torii Hunter’s solo home run. Back to back doubles followed and the Royals were quickly down two. The Royals continued to struggle and even had a defensive miscue costing them a run in the sixth and the Royals were down 4-0 when Hochever was pulled after 5 2/3. Not a horrible game for Hochevar. It was about what you would expect of him, ending the day with a 4.76 E.R.A.

Angels’ starter Jared Weaver was showing great stuff and just continued to roll through the Royals offense. He pitched 6 and 1/3 and gave up no runs while striking out six and walking two. The Royals were very happy to get to the bullpen, where Jeff Francoeur and Mike Aviles were able to get home runs. This was all the scoring for the Royals as they would fall 4-2.

The negatives for the Royals began with the 0-5 performance by Alex Gordon highlighted by 3 strikeouts including one in the 9th with two outs and two on. Alex Gordon did not dominate this day and it will be interesting to see if he starts to dominate like they said he would this year. The Royals put a big emphasis on defense and still had three errors on opening day. The one that is the most blazing is Chris Getz since he is on this team for his defense. The offense was non-existent outside of the two solo shots as only 5 players had hits and only one, Melky Cabrera, had more than one. The bases were left loaded by both Jeff Francoeur and Alcides Escobar and the tying run was left on at the end of the game on the Alex Gordon strike out. The Royals have to force in runs if they are going to win very many games and cannot leave this many runners on base, especially with one out.

The positives were Hochevar looking to be trending the right way along with six walks by the offense. The Royals needed to be more patient at the plate this year and showed signs of that on opening day but did strike out ten times. This may be more of a positive on Jared Weaver than a negative on the Royals. Francoeur quickly threw to home as Jeff Mathis came around on a Peter Bourjos single. Mathis tried to roll over new Royals catcher Matt Treanor but Treanor held on for the out in one of the best plays in Major League Baseball yesterday.

While I only predicted the Royals to win 70, it would have been nice to see them get off to the 1-0 start. Now it’s a matter of winning at least 3 of the next 5 and splitting this first homestand to start the year off on a positive note. It will be interesting to see if Alex Gordon goes back to the K machine he was last year or if opening day was an aberration of what the season will be. The Royals have 161 more games to play and 5 more in this homestand to give us an idea of what kind of team they are going to be this year. One can only hope a bit better of one than was shown opening day.

KCRoyalman can be heard Mondays here on i70 baseball with Bill Ivie from 10p-11p Central and Sundays at www.royalmanreport.com from 7p-8p Central Time.