A recent post on the Giants blog Bay City Ball featured a fantastic chart plotting every Giants season by team OPS+ and ERA+. It inspired a similar chart at The Hardball Times of World Series champions (which seems to prove the maxim that pitching and defense win championships). It also inspired me to make this chart of every Royals team by OPS+ and ERA+ for my blog (playoff teams in red): 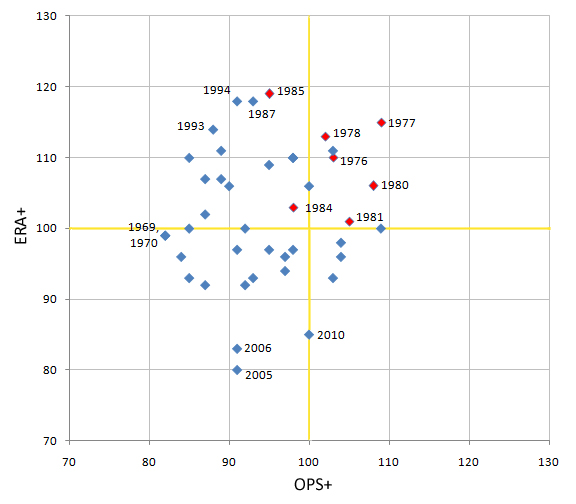 Perhaps the most shocking revelation is that after 42 seasons, only six teams are above the AL average in both OPS and ERA, and those six teams all fell in a seven year stretch between 1975—81. The chart is good for identifying outliers, such as the anemic offense of the expansion team in ’69 and ’70, the all-around greatness of the ’77 club, the pitching staff in ’93 and ’94, and the misery of ’05—’06. But most seasons get lost in a muddle of too much information. So in an attempt to glean more info out of the chart, I’ve separated the seasons out by decade to take a closer look at the ups and downs in Royals offense and defense over the years: 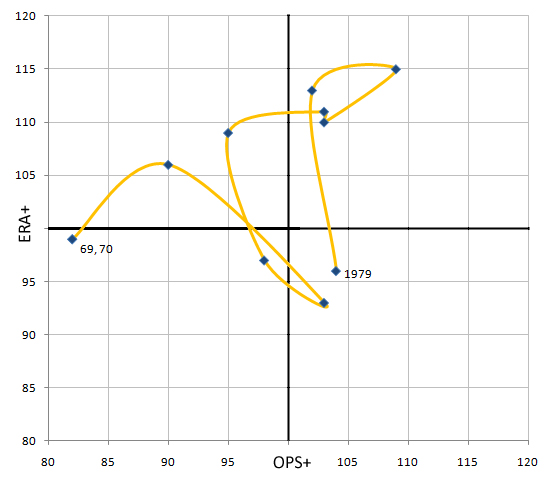 The first two seasons of Royals baseball had identical numbers (82 OPS+, 99 OPS+) and featured surprisingly strong pitching and defense, but the offense was non-existent. Lead by Paul Schaal, Amos Otis, Freddie Patek and Cookie Rojas, the ’71 offense took a leap toward respectability while the pitching staff soared and the third year expansion team had a winning record and a second place finish. The addition of John Mayberry for ’72 helped push the offense into a strength, but run prevention took a dive (93 ERA+). GM Cedric Tallis left the club in ’74, but he had built up a powerhouse that fired on all cylinders between ’75—’80, including four first place finishes and two second place finishes. As far as the regular season is concerned, these were the glory days. 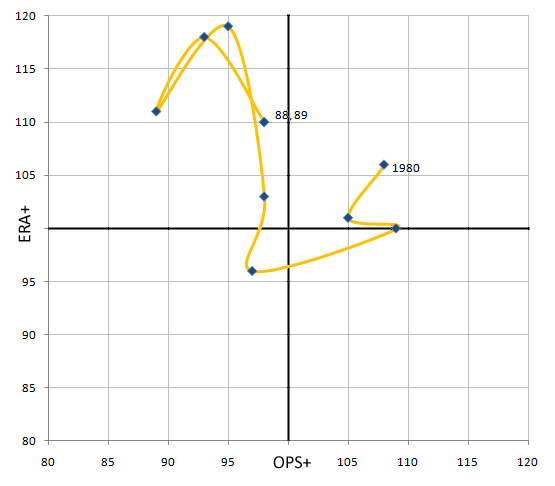 The offense of the mid-to-late ’70s started to dry up, but after a dip in ’83, the Royals pitching & defense remained a major strength between ’84—’89 thanks to guys like Bret Saberhagen, Charlie Leibrandt, and Mark Gubicza. When it comes to post-season success, run prevention is the name of the game, so it should not be surprising the team’s lone championship came in the season with the club’s best ever ERA+, a 119 in 1985. 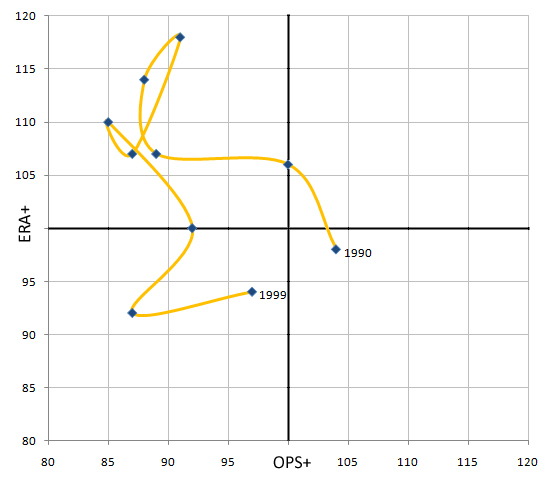 The ’90s carried on a similar theme from the ’80s with a collection of stellar pitching— think Appier, Cone, Montgomery, Gordon—between ’91—’96, but the offense was just too putrid for it to translate into any overall success. That ’94 staff was something special until the lockout came. By ’98, the pitching had dried up, the spiral into the black hole of the next decade had begun… 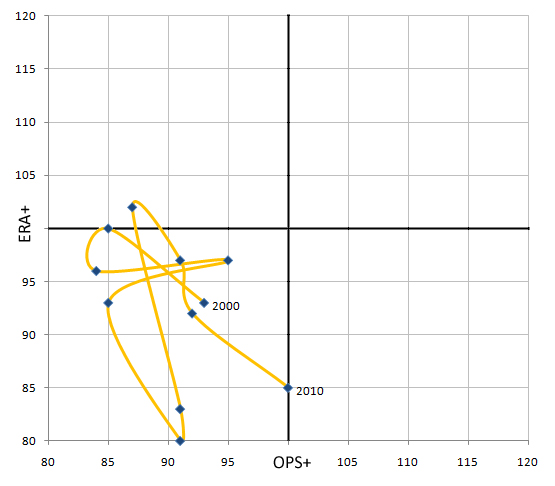 Do not look at that graph for too long…like the sun, it might melt your eyeballs. The ineptitude is stunning. The only dot that peaks into positive territory is the 2007 ERA+ of 102, which the Royals rode all the way to a 69-93 record. Sadly, last year’s perfectly mediocre OPS+ of 100 was the team’s best since 1991…and they still lost 95. Here’s to the the next decade of Royals baseball moving towards the upper right quadrant…