During the offseason we have been taking a look at the past, giving readers a timeline of St. Louis baseball throughout history. Last time we learned about Tony LaRussa’s arrival in St. Louis, the great home run chase of 1998, and brought the team back to the playoffs for the first time since the days of Whiteyball in St. Louis. A postseason collapse in 2000 left the team wondering what was coming next…

After rookie pitcher Rick Ankiel had a rather historic meltdown during the 2000 postseason run for the Cardinals, the organization had some rather large concerns about how their young phenom would recover for the 2001 season. Their cause for concern was legitimate – the 21 year old was not the same player, making only six starts on the year, going 1-2 and serving up a rather grotesque 7.13 ERA over 24 innings (that would be 4 innings a start, in case you had not thought about it).

By the end of the season, the Cardinals – not to mention all of baseball – were talking about a very different 21 year old. When Spring Training was about to break, manager Tony LaRussa had a choice to make about a young player. He had an impressive spring, but was it enough to make the team? Veteran first baseman Mark McGwire pleaded with the skipper to keep the kid around, watch him, believe in him. When veteran outfielder and free agent signee Bobby Bonilla went down with a hamstring injury right before the beginning of the season, the decision was made: Albert Pujols had made the team.

The young player did nothing but rake all season long, hitting .329/.403/.610 with 37 home runs and 130 runs batted in, all while playing first, third, left field and right field, even though his natural position was third base! He was the unanimous Rookie of the Year choice, and somehow was not the team leader in OPS with 1.013. That distinction went to the much maligned J.D. Drew, who seemed to be injured as much if not more than he was healthy.

But what about the team? The first half seemed to be rather frustrating, going 43-43 and not really making a push to take over in the NL Central. Passing off Ray Lankford to the Padres in return for Woody Williams on August 2 gave the starting rotation a jolt, and Williams himself went 7-1 with a 2.28 ERA in 11 starts down the stretch. Matt Morris had a career year, going 22-9. They tied the Astros for the NL Central crown, but lost the season series with Houston and was awarded the Wild Card. Unfortunately, the team ran into the two headed Arizona monster of Randy Johnson and Curt Schilling in the NLDS, and couldn’t battle through. It was a quick exit, but there were some strong pieces in place leading into the next year.

2002 seemed to be a year of tragedy for the team. April started the year off poorly (12-14), but a strong May (18-10) began to show a team that would not let up and played through it all. On the morning of June 18, the team was tied for first, but Darryl Kile pitched a tidy 7.2 innings of one run ball to push the team into first, while the team then learned of the passing of legendary broadcaster Jack Buck. Cardinal Nation mourned the loss of the longtime voice of the Cardinals, but the mourning was far from over. 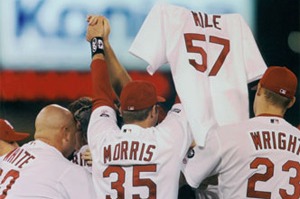 Just four days later, the Cardinals were in Chicago, gearing up for a nationally broadcasted day game against the Chicago Cubs. When Darryl Kile did not arrive at the ballpark, teammates became concerned. Eventually it was discovered that the pitcher who had just so recently pitched them into first place had died suddenly with a coronary disease. The game was postponed, and the team was heartbroken, shocked and in disbelief at what had happened.

Spurred on by the memory of their fallen teammate, the club put together a blistering second half. July trades bringing in veteran starter Chuck Finley and slick fielding third baseman Scott Rolen helped the team march to the playoffs. There was whisper that this would be a team of destiny, battling through adversity and fighting their way to the top. Unfortunately, October is far from scripted. The resilient team was shut down by the Giants in the NLCS, but the 97-65 record was nothing to be ashamed of, and there was a rather fearsome lineup brewing…

So who was to blame for the 85-77, third place finish in the Central in 2003? Do not look at the lineup. They only finished in the top three in almost every offensive category. The blame seems to be on the rotation. The boys played roughly .500 ball every single month of the season, with June (16-11) being the only month in which they even looked like a strong team. The NL Central was almost split into two divisions, with the Cubs, Astros and Cardinals all playing just over 500, while the Pirates, Reds and Brewers playing 10-20 games under .500. Consider this the first season where the term ‘Comedy NL Central’ came from.

There were positives. A lineup with Albert Pujols, Jim Edmonds, and Scott Rolen hitting back-to-back-to-back was never something to frown about, and the three players put on a show. The trio combined for 110 home runs, 317 RBI, and combined for a 1.008 on base plus slugging percentage. On the pitching rubber, Woody Williams continued his career resurgence, going 18-9 with a 3.87 ERA over 220 innings pitched. Alas, there were not a lot of positives about the starting rotation, and considering there were 16 starts made by Jason Simontacchi (interesting mainly because of how Mike Shannon referred to him as “Simo-man”), and 6 starts each by Jeff Fassero and Sterling Hitchcock, it is obvious there was some squirrelly stuff going on. The pitchers combined to finish eleventh in team ERA, thirteenth in hits, fifteenth in home runs allowed, and twelfth in strikeouts recorded.

2004 was much different. This team was out for blood from day one, spending 102 games in first place and finishing an astounding 105-57, the best finish for the team since 1944, back when Stan Musial was roaming the grass of Sportsman’s Park. This was the year of the MV3, with Pujols, Edmonds, and Rolen all putting up big numbers and rolling into the playoffs with ease. A deceptive April (12-11) and May (15-12) didn’t make them favorites by any means. Many picked the Cubs to make the playoffs, but the Cardinals blew them out of the water. The only trade came after the trading deadline, picking up Larry Walker from the Rockies in return for Luis Martinez and Chris Narveson. The club was a juggernaut that went full throttle all the way to the World Series. 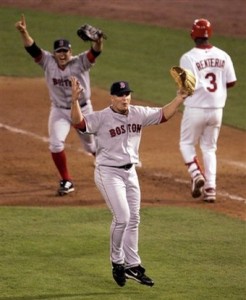 The Series looked to be evenly matched, and both teams had played a full seven game League Championship Series, so there was really no talk of one team being more ‘rested’ or relaxed than the others. The Series started in Boston, and the Cardinals quickly found themselves in a 2 games to none hole and St. Louis bound. The Cardinals had gone full steam all year long, but the Red Sox were playing the “team of destiny” card. They went back to St. Louis, broke the curse of the Bambino and danced on the grass of Busch Stadium after sweeping them right out of the Series. It was a crushing end to a brilliant season, and everyone knew the Cardinals would be the team to beat the next year as well.

The team to beat? More like unbeatable. The 2005 club pulled in to first place on April 16, and never found themselves looking up from second again the rest of the year. The only month they played that was under a .590 winning percentage was September, where they cooled to a mere 13-13 record for the month. The team spend an astounding 155 days in first place. They made no significant trades in season and were the favorites to march all the way to the World Series.

Ace of the staff Chris Carpenter had a Cy Young winning year, going 21-5 with a 2.83 ERA and 241.2 innings pitched, including seven complete games. He was not the only accolade winner that year, as Albert Pujols had his first career MVP win, hitting .330/.430/.609, hitting 41 home runs and driving in 117 runs, which was actually a career low for the slugging first baseman at that point in his career.

For the second year in a row the Houston Astros stood between them and the Series. The bitter rivals put on a show, with circus catches by Jim Edmonds, dominant pitching performances by Roy Oswalt and Chris Carpenter, and Albert Pujols and Lance Berkman launching home runs deep into the night. Eventually the Astros won out and advanced on, but the rivalry became one that fans would remember for the next few years.