If you look at a yearly calendar July is the first full month of summer. The days are long and hot. It is the only month Major League Baseball has to itself on the sports calendar. If you are reading this, you probably like that. It is when most of America takes their vacations. In recent years it is when Royals fans begin taking their vacations from watching or listening to the Royals. They would rather listen to cicadas and think about Chiefs training camp, or their favorite college team.

There is the All-Star Break which is known as the half way point of the MLB season. Even though game 81 usually occurs in late June. Like most months this July looks particularly tough for the Royals. 6 of their 8 series will be against teams with 2010 winning records. With the exception of Cleveland at the end, all of them are expected to compete for play-off spots in 2011. Not only will the Royals be playing good teams, 17 of the 27 games are on the road.

Despite the tough draw, road schedule, and what will likely be a lot of losing let me lay out a few reasons to keep watching. If you enjoyed the first part of spring training July is likely the time to tune in or go to Kauffman. July is when the much publicized prospects will likely be called up. I expect Mike Moustakas to be the first, followed by Mike Montgomery. Watching them develop will be a reason to pay attention.

The end of July is also the trade deadline. I love the trade deadline. You never know what might happen. The ensuing hilarity usually has a big impact on the playoff and playoff races. Not that I think the Royals will be hunting. But if you haven’t noticed the Royals have a log jam of power hitting first baseman. I anticipate one of them being traded, along with Eric Hosmer making his MLB debut.

Finally, we all know there won’t be any football training camp to look forward to. So you might as well watch the Royals. Here are the numbers.

Vs teams in the AL Central: 17

Key Series:
July 14-17 @ Minnesota Twins: This is the first series after the All-Star Break. It will be a good time for a young team to reset their clocks and get off to a good start. The Twins will likely be fighting for, if not holding the division lead. This is the organization Dayton Moore says he’s trying to model the Royals Franchise. Starting the second half is good time to see how the Royals stack up.

July 22-24 vs Tampa Bay: The Tampa Bay Rays are another organization the Royals should look to as a role model. When the Rays break camp their starting pitching staff will have a combined salary of $7.3 Million. They’re expected to go toe-to-toe with the Yankees and Red Sox in the AL East who have single relievers who will make more than that. They traded off a lot of talent, and let a lot of talent walk via free agency this off-season. They too have a stocked farm system and it will only improve. The Rays have 12 of the first 89 picks in June’s Amateur Draft. This series is key mostly because the Rays, like the Twins are a good measuring stick of what the Royals can become even with a low payroll. I want to see the outcome on the field of this match-up. 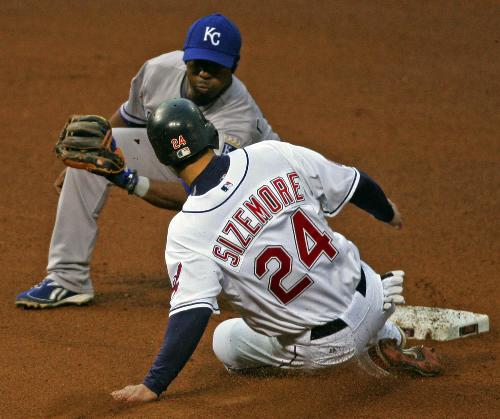 Key To a Hot Month: Get off to a good start after the All-Star Break and carry some momentum for the rest of the month. Likely wins and losses won’t matter at this point. However, any prospects that get called up need to get off to hot starts before the stench of losing impacts their game.

At the end of July:

the Royals are .500…. This too would be awesome, and considering the tough schedule. It would mean winning all of their home series including some sweeps, and stealing some on the road.

If the Royals are above .500… Again, the odds are against this happening. I know, some of you are saying “But you’re saying there’s a chance, right?” Like I said in an earlier entry these games are more about getting young guys better at the major league level. However, some of them will be worth watching while they improve.