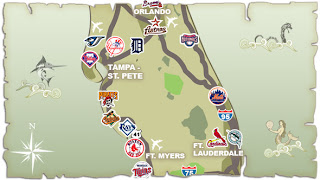 Those of you that know me a bit know that I get really excited about the beginning of the baseball season. First day of Spring Training? Check (I wore red). First spring game? I found ways to watch that silly little Gameday box from my desk at work (and I wore red). First televised game? I again snuck peaks at the game (despite being unable to listen to most of it) from work (and wore more red).


Each and every first made me smile, caused me to comment, and gave me reason to talk about baseball a little more than usual. But when the game ended and the final score was posted, I shut it down. I didn’t fuss that too many men were left on base or get irritated at why Tony used this reliever instead of that one. Because it didn’t matter. Spring records mean nothing (although I imagine being incredibly bad or blowing everyone out would turn heads). I have no idea what the standings look like for the Grapefruit League, nor will I be looking them up anytime soon.


It’s not that I don’t care. I’m trying to guess my way through those last few roster spots just like everyone else. I have been looking at various names/faces/statistics, but every time I start to get wrapped up in it I remember: Never fall in love too early in spring. Two weeks ago I was pulling for Lance Lynn for the rotation, Daniel Descalso to be the last bench player, was genuinely concerned about Lance Berkman, and still found little reason to trust Kyle Lohse. Since then I changed my mind… on all of those. But let’s look at one at a time… 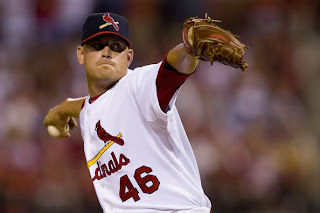 Pitchers: I am a huge Kyle McClellan fan. Really. I want him to succeed in whatever role he finally lands in. However, it seems that every year he gets put into the rotation mix during Spring Training, I pull for someone else. Why is that? It’s because I constantly fall into the belief that while fifth starters can be found through any number of ways (and the Cardinals have a history of… interesting… fifth starter names over the past few years), strong and reliable workhorse bullpen arms are a little tougher to come by. I don’t doubt Boggs and Motte. I love those goobers and the flaming fastballs they shoot out of their arms like cannons. I do at the same time love that McClellan can use an assortment of pitches and be the kind of setup man that TLR loves to have and use.


I was pulling for Lance Lynn to have the kind of spring that Jaime Garcia did last year. After watching him today, I’m still unconvinced that he absolutely couldn’t do it. His outing was okay, 4 innings, 3 hits, 2 runs and 4 strikeouts is nothing to be super critical of, but not eye opening either. McClellan has done nothing but mow ’em down. I want it to be McClellan. I suppose I’m pulling for Fernando Salas to get that last spot in the pen, but as Derrick Goold noted this afternoon, the team hasn’t decided yet. I’m not sold, but I feel better about this all now than I did a couple of weeks ago, that’s for sure.


The other pitcher discussion has to be the combination of Jake Westbrook, Garcia, and Lohse. Quick, if you would have picked one of those three to have a strong spring, which would it have been? I would seriously laugh if you had said Lohse. NO ONE saw it coming. Will it last into the regular season? I certainly hope so. I don’t expect him, Westbrook or Garcia to take the place of Adam Wainwright (*sniff*… I’m okay, it’s dust or something), but feeling like we could rely on him to be more like the pitcher we saw in 2008 would be fantastic! Is it time to get concerned about Westbrook feeling like he hasn’t really been able to get his pitches under control or Garcia not feeling worried about his not great start or not working counts well? I suppose that time is getting close. The games are starting to mean something (even if the final scores still do not).


Outfield: Color me not really worried about the outfield. Holliday and Rasmus are obviously just fine, and I think Berkman will be too. He probably cannot and really should not be playing every game like he thinks he can, but I feel confident enough in Jay and Craig being the other two outfielders that it should work out nicely. Should Berkman go down, it would not be the end of the world. I just hope he doesn’t. That’s all.


Infield: The four starters are clear – Pujols, Skip, Theriot, and Freese. No questions there. The two bench spots are the trick. Most assume that Tyler Greene will take one of them, but then it comes down to Daniel Descalso or Matt Carpenter. At the beginning of spring I would have said Descalso, no question. I fell in love too early, then felt Carpenter sweep Cardinal Nation collectively off our feet. He’s not on the 40 man roster, but man, he could be. The fans like him. The front office likes him. Tony likes him (and his work ethic… so… he’s the anti-Brendan?).


Carpenter plays third. In reality, he only plays third. We have a third baseman by the name of David Freese. Freese has obviously had his share of boo-boos and injury mishaps, and the team is taking care of those and shielding him from doing too much too soon, but really, do you want two players on your team that only play third base? Greene can play second and short, but Descalso can play second, short, and third. Versatility will get you everywhere on a Tony team, just ask Aaron Miles.


Is there a right or wrong answer as to who to take north? I’m not sure there is. The point will most likely be moot anyway whenever Nick Punto (Yeah, I forgot about him too) comes off the disabled list. Both players have played well. Carpenter has gotten more print, but both have averages over .300, both have played solid defense. If you want to argue logistics, then fine – Descalso has experience at the big league level, although very limited (11 games and 37 plate appearances), while Carpenter hasn’t played a game above AA. That is definitely a factor.


Don’t sell either short. However, just because the games are starting to mean something doesn’t mean it’s been long enough to fall for either player.

4 thoughts on “Starting to Mean Something”