Dayton Moore drafted Jeff Francoeur in the 1st round of the draft in 2002 while with the Atlanta Braves. In his time with the Braves Francoeur rocketed through the minors and quickly made is debut with the Braves in July of 2005. He hit a 3 run home run in his second game in the majors against the Cubs. The start to his career was so hot that he graced the cover of Sports Illustrated in August. Despite playing in only 67 games he finished with 14 HR and 44 RBI’s. He finished 3rd in Rookie of The Year voting.

Francoeur went on to have successful 2006 and 2007 campaigns displaying decent power, and flashing leather in right field. He won a Gold Glove in 2007. However, after 2007 his career began to decline. In June of 2008 Francoeur was in such a slump he was sent to AA. After three days he was recalled because of injuries on the big league club, where he remained the rest of the season. His final numbers were .234/.300/.324.

During the middle of the 2009 season Francoeur was traded to the Mets where he floundered in mediocrity, and began to draw the ire of Mets fans and the New York media. During the 2010 season he was traded to Texas Rangers where he continued his mediocrity and became a free agent at the end of the season. 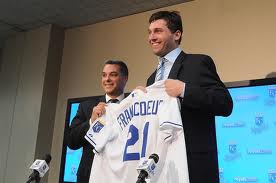 Many Royals fans were shocked it took an entire month for the Royals and Francoeur to come to terms on a contract. There was also a collective sigh of relief when it was revealed the deal was only for 1 year and $2.5 million, plus incentives. For that type of money it’s worth it to take a flyer on Jeff Francoeur. He’s not blocking any prospects. He will certainly be a defensive upgrade in right field. Despite his offensive woes Francoeur has remained strong defensively. For the first time in several years the Royals will have a right fielder that actually belongs.

As mentioned above Francoeur has had his offensive struggles. He can display some power, but his on base percentage and strike-outs have become a drag. It would be a fun summer in Kansas City if Francoeur regained his early career success. I don’t want to say the Royals don’t need that type of performance, they need all the help they can get. But keep in mind, we’re talking about a team that has seen a player hit more than 20 home runs ONCE in the last five seasons, Miguel Olivo in 2009. If Francoeur improves his plate discipline and cranks 25 home runs, and 100 RBI’s I would consider that a successful season for him and the Royals. If that does happen I would hope Dayton Moore considers resigning him to a better contract. If not Francoeur is likely to become the next whipping boy for a frustrated fan base.