During the offseason we have been taking a look at the past, giving readers a timeline of St. Louis baseball throughout history. Last time we learned about the “Runnin’ Redbirds” and how Whitey was leading the boys to the top. Things were changing though, starting with the last days of Gussie Busch.

Whitey Herzog had lost his edge in the Cardinals’ clubhouse. 1990 was a mess for the team, and Herzog wanted none of it. There were ten players entering their final years of their contract, and Whitey wanted to lock them up or trade them and get some value back. However, the roundtable of brewery people that he had to go through were unwilling to help him do the work he needed to put the team on the right path again.

The players were not policing themselves, bringing in entire posses of people and allowing them to go wild in the clubhouse. When Herzog tried to talk to the team and regain control, some players ignored him. The players were playing for themselves, not caring what happened to the team. At 33-47 halfway through the season, the Cards were in San Diego, and Herzog looked up and down the bench, noticing players joking around and laughing, not caring that their season was circling the drain. He quit. No one really understood why, but eventually it became clear that between the drama with the brewery and the players that seemed to be throwing in the towel, this was not the kind of atmosphere Whitey thrived in. 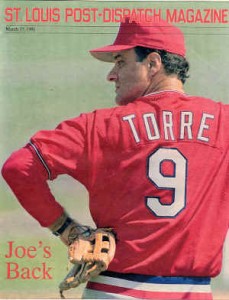 The team was a mess. Pitcher Joe Magrane said that it was to the point where if the team bus had broken down, 25 cabs would have shown up and gone in 25 different directions. Red Schoendienst took over the team for a short period, until general manager Dal Maxvill hired Joe Torre to take over. The former Cards’ third baseman and MVP winner had been managing since he retired, working with the New York Mets and Atlanta Braves before taking the helm for the Cardinals. He spent the rest of the season observing and planning, trying to figure out what to do to pull this team back together. They finished an abysmal 70-92, sixth in the NL East.

Joe Torre picked up the pieces over the offseason, but many of the pieces that made up the runnin’ Redbirds were gone. Willie McGee was traded to the A’s, Vince Coleman, Terry Pendleton, Danny Cox, and John Tudor were all granted free agency. The team was left with perennial All-Star and Gold Glove shortstop Ozzie Smith and the Secret Weapon Jose Oquendo. Closer Lee Smith set a team record by picking up 47 saves, but after that, it was a shell of the team that had looked so proud and mighty in the days of Gussie and Whitey.

Torre did pull out the wins, however, and the team finished second in the NL East at 84-78. Five pitchers finished with ten or more wins – Bryn Smith (12), Bob Tewksbury, Ken Hill, Omar Olivares (11 each), and Cris Carpenter (no typo – 10). Of those five, none of them finished with an ERA under 3.25 and no pitched 200 innings. On paper, this team was unimpressive. In reality, the next few years would be even moreso.

Over the offseason the Cardinals had traded pitcher Ken Hill for Andres Galarraga, hoping the Big Cat could replace an aging Pedro Guerrero at first. Instead Galarraga had a disappointing year, then moved on to the thin air of Denver, where he had a career resurgence with the Rockies. At least the team was finding a little firepower in the form of centerfielder Ray Lankford, who finished third in the 1991 Rookie of the Year voting and slugged a team high 20 home runs.

1993 was more of the same. The team was doing okay, but nothing was really notable. The team finished 87-75, again in third. Joe Magrane returned to the rotation after Tommy John surgery had wiped out most of the previous two seasons, but he was not the same pitcher who won 18 games at age 24, and found himself released in mid-August. Tewksbury again led the rather unimpressive staff with a 17-10 record, but his 3.83 ERA and 1.301 WHIP (not team bests, but very close) tells the story of why this team did not win more ballgames.

Then again, the lineup was not so helpful either. Despite finishing fourth in the league in batting average and second in on base percentage as a team, the telling marks of finishing dead last in home runs and eighth in slugging shows little to no pop. The one notable game could be found on September 7 in Cincinnati, where outfielder Mark Whiten hit four massive home runs and drove in twelve runs in a single game, tying two Major League records in the process. 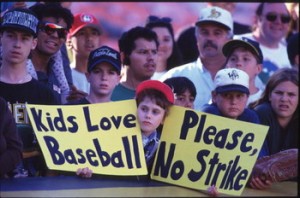 The real story in 1994 for the Cardinals was not the season itself, especially since they finished a meager 53-61. The news was in all of baseball, where a players’ strike halted the season on August 12, eventually wiping out the rest of the schedule and the World Series. The owners tried to impose a salary cap to make up for their mistakes over the past few years, but the players were having none of it, feeling they were pushed into striking.

During the strike the team went through changes of their own. Dal Maxvill was out as general manager, and Walt Jocketty was in, after spending many years with Oakland and Colorado as assistant GM. He knew that the team was on a slow boat to China, and knew that changes had to be made. After the strike ended, baseball was in shambles. Fans were slow to return to the ballpark, not trusting either side of the argument in the strike and deciding instead to just wash their hands of the matter. After a 20-27 start to the season, Jocketty helped show Joe Torre the door, replacing him for the rest of the year with farm director Mike Jorgensen.

The team itself was just sad. No starter had more than seven wins. SEVEN. Single digits. Best starter ERA? 3.81. Also quite sad. The offensive side of the ball was actually worse, sitting dead last in batting average, on base, slugging, hits, runs, and total bases. Outfielder Brian Jordan finally got in a full season and turned out a solid performance, turning out a .296/.339/.488 line. Second base was a mess, with four different players getting 30+ starts there. The Cardinals finished an abysmal 62-81, fourth in the five team NL Central.

At the end of the season, the brewery put the team up for sale. The Anheuser-Busch era in St. Louis was coming to an end, and there were more changes to come.

2 thoughts on “The Cardinals In Time: Lean Years”